By Any Means by Charley Boorman

Having previously travelled on motorbike from London to New York via Europe, Central Asia, Siberia, Alaska and Canada on Long Way Round, and from John O'Groats to Cape Town on Long Way Down, Charley Boorman sets out on another adventure. This time the motorbikes (and previous wingman Ewan McGregor, who was busy filming) have been left behind as Boorman sets out from his childhood home in County Wicklow, Ireland, aiming to get to Sydney, Australia, travelling by any means of transport he can find. The result is a 20,000-mile odyssey through twenty-five countries. 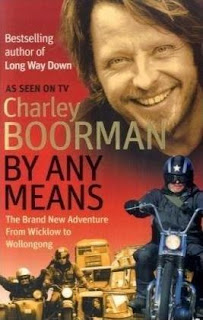 Having enjoyed Long Way Round when the book and TV series appeared in 2004, I was disappointed with Long Way Down when it appeared. Aware of the mishaps and problems they'd had on the first journey, Long Way Down had been timetabled and planned to such an extent that a lot of the fun spontaneity of the earlier mission was lost, and the strict timetable meant that Ewan and Charley had to skip interesting areas they were passing in order to hit certain locations at certain times. This proved to be a point of contention on the African trip, and it wasn't until past the halfway point that they could finally relax and chill out a bit.

For By Any Means the goal was to reinstate this sense of spontaneity. As well as that, the decision to ditch the bikes was taken because travelling by motorbike through some of the areas they were heading to - particularly island-hopping from Malaysia down through Indonesia to Australia - would have been logistically difficult. Dropping the bikes and travelling through mostly inhabited areas along the way also meant that there was no need for the support vehicles and teams which, although important from a safety perspective, had eroded the 'two guys against the elements' feel of the two trips, particularly the second. Finally, whilst the bikes had been important for eating as many miles as possible per day (particularly on the first trip, which almost circumnavigated the globe), it also meant that contact with the locals was fairly limited. The new approach conversely relied on talking to local people and making use of local means of transport.

The book successfully complements the TV series. Interestingly, the book relates stories not mentioned at all in the TV series, whilst skipping some elements that were much more heavily focused on in the series. Charley's visit to Angkor Wat was a major part of the TV show but is here covered only briefly, whilst a visit to another, lesser-known temple wasn't even mentioned on the show but is given coverage in the book, for example. This avoids the problem of repetition between the two mediums, and is helpful if you're planning to get both the book and the DVD.

The steps taken by the team do mean that By Any Means is a more engaging story and trip than Long Way Down. Many of the locals they meet whose stories they hear simply wouldn't have been encountered with the bikes roaring past at 70mph. Logistically the expedition isn't perhaps quite as spontaneous as it first appears: a support team in London arrange several modes of transport ahead of time and at one point the gang is defeated in their attempts to enter Burma and have to take a commercial flight to get to China instead.

Still, the journey is an impressive achievement, and Charley Boorman's down-to-earth style is readable and entertaining. 'Proper' travel writers appear to be a bit snooty about these expeditions (a sequel to this journey, in which Boorman travels on from Sydney, up through Papua New Guinea and the Philippines to Tokyo, is currently airing on BBC-2 in the UK) since Boorman doesn't really get to grips with the politics or socio-economic backgrounds to these countries, but that's not really the point. Boorman's concern is meeting the local ordinary people and finding out how they live their lives under different circumstances. This 'theme' is actually successfully handled, as the way of life between bus drivers in Turkey, one of the few female taxi drivers in Tehran and cattle drovers in Australia's Outback is contrasted. The conclusion - people are people wherever you go - might not be shockingly revelatory, but it is nicely handled nonetheless. There's also some ironic interest to be gleaned from the fact that Iran, the country the team was most concerned about crossing, turned out to be one of the friendliest and most welcoming they visited and had possibly the least security concerns.

By Any Means (***½) is a breezy and entertaining account of a genuinely impressive journey around the world. The book is available now in the UK and USA.

By Any Means 2 is currently airing in the UK and a new McGregor/Boorman motorbike trip, possibly through South America, is being planned for next year with the working title Long Way to Go.
Posted by Adam Whitehead at 20:33

Email ThisBlogThis!Share to TwitterShare to FacebookShare to Pinterest
Labels: by any means, charley boorman

I always enjoy Boorman and McGregor's books and films. It's what keeps me going to travel the world.