The Cylons are preparing to carry out their long-planned sneak attack against the human race. A vast fleet of basestars laden with nuclear weapons is preparing to jump to the Twelve Colonies and carry out an act of genocide. Many Cylon humanoid models are seeded through the Colonies as saboteurs, spies and sleeper agents in case anything goes wrong. The plan is carried out and is a huge success, except for the unexpected escape of a single battlestar, the Galactica, and its accompanying fleet of refugee ships. 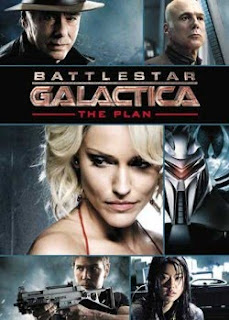 With the Cylons in the fleet cut off from the pursuing forces, it falls on them to carry out a series of saboteur efforts: a Simon is assigned to destroy his home ship, a Six is sent to frame Dr. Baltar for a crime he didn't commit (well, he did, but unknowingly), a Boomer sleeper agent is ordered to assassinate Adama and a Leoben becomes obsessed with Lt. Kara 'Starbuck' Thrace. For Brother Cavil, the erstwhile leader of the infiltrators in the fleet, it soon becomes clear that the humanoid Cylons are too easily distracted or 'infected' by the humans and their ways, to his anger and frustration, as this is a weakness he refuses to endure in himself.

On bombed-out Caprica, another Cavil model ends up in the resistance cell led by Sam Anders, and is perplexed by the humans' desire to go on fighting and surviving when there appears to be no hope at all of survival, let alone victory, and decides to investigate this part of the human spirit in greater detail.

The Plan is a TV movie that goes right back to the Battlestar Galactica mini-series and then revisits key moments from the first two seasons through the eyes of the Cylons. Along the way, it attempts to resolve several key problems with the series, notably a few major plot holes left gaping and to give a lot more screen time and character development to Rick Worthy's character, Simon, arguably the least-developed Cylon role. In this movie we learn that there was a Simon model in the fleet after all and what he was doing, and discover that this Cylon was married with a step-daughter. This also allows the return of Edward James Olmos' real-life wife Lymari Nadal as Giana, one of the refugees from Caprica that Boomer rescued in the pilot, and a revelation about the ultimate fate of her character.

To some degree, these are small-fry questions, however, with bigger questions like how Boomer's sleeper programming worked, who the unknown person Caprica-Six was meeting on Caprica during the mini-series was and what was going on with Shelly Godfrey and her attempt to manipulate Baltar being more thoroughly explored. In some cases the answers are interesting, but in other cases not really that necessary, with fans long ago coming up with decent answers.

Overall, especially in the first half, the exercise feels like an excuse to show off some excellent CGI (and some rather ropier effects as well, including one terrible shot that makes Caprica look like it's about three miles across) but mainly to fill in some plot holes only obsessive nitpicking fans worry about. In the second half, however, a more interesting story emerges. Essentially A Tale of Two Cavils, in the second half the experiences of Galactica Cavil and Caprica Cavil are contrasted and explored in a decent manner, with Simon's situation and Anders' rise from being a sports jock to a military leader unfolding as decent subplots. These elements are tied together with some great writing and some excellent acting (especially from Dean Stockwell as Cavil, who comes across as calculating, intelligent and utterly ruthless, even moreso than he did in the series). The storylines also have a great conclusion when Caprica Cavil is rescued along with the rest of Anders' rebel group and meets up with his fellow model number in Galactica's brig and airlock where they discuss their conclusions, which are very different.

Whilst that thematic structure works well, the 'unrated' version of the DVD/Blu-Ray makes rather gratuitous use of its freedom to depict sex and nudity, most notably a rather incongruous Galactica crash-zoom on a nude pilot in the locker room. I suppose if you are going to include nudity, doing so for both sexes is fair, but none of it adds anything to the plot and looks completely out of keeping with the rest of the series.

Battlestar Galactica: The Plan (***½) is the series' swansong and on that note is altogether stronger than the actual series finale itself. However, whilst the movie eventually gets it together and has a solid second half, the first half is all over the place, story and effects-wise, and takes probably too long to cut to the chase. Still, an interesting addition to the series. It is available now on DVD and Blu-Ray in the United States. A UK release has not yet been confirmed (although a region-free UK import of the Blu-Ray is available). An edited version of the movie will air on SyFy in the United States and Sky One in the UK some time in 2010.
Posted by Adam Whitehead at 18:44

What do you think the chances are of us seeing another movie, after this one?

I know a while back there was talk of a film, with the story continuing after the fleet's arrival on Earth.

Not quite sure how I'd feel about that. Bit mixed feelings.

I'll certainly be watching Caprica when it begins, however.

The sets are all destroyed, so a new movie would have to not involve Galactica at all. That means a story set purely on New Caprica, or a story set on Earth (Adama and Tigh versus a Rampant Gazelle!) or something else. Otherwise you'd need a movie to afford to rebuild the sets, which doesn't look likely either.

Maybe a story set entirely in the past dealing with the Final Five, the 13th Tribe, the temple on the algae planet, Aurora etc, like the recent quasi-canon comic mini-series could be doable.

Otherwise it's CAPRICA from now on, although I don't rule them out throwing an eastern egg in, like a shot of the Galactica under construction or something later on in the series.

Yeah the sudden zoom in on the dude's dangling dick was hilarious.