300 is one of the most critically divisive movies of recent years, with Metacritic and Rotten Tomatoes both giving it a score in the 50-60 range, indicating a near-equal divide between those who love and hate it. It's understandable. On a surface reading, this movie is vapid, stupid, ludicrously over-the-top and even less historically accurate that other recent liberty-taking films such as Gladiator and U-571. However, 300 may also be the most textually-misread film of our times. In fact, the movie is an excellently-staged piece of propaganda. Imagine if Joseph Goebbels had travelled back in time with a modern CGI team and had been paid by the Spartans to tell the world how awesome their soldiers were (frankly, that sounds like a great idea for a film in itself), and you'd end up with a movie like this. Seen in that light, 300 becomes a great deal more intriguing. 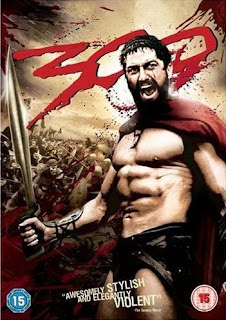 The movie is based on Frank Miller's graphic novel, The 300, and opens in 480 BC. Ten years earlier, the Greek armies had defeated the invading Persians under Darius at Marathon, but now his son Xerxes has returned with a vast army. The Greek city-states are preparing to resist, but everything rests on Sparta, the most formidable of the Greek cities. Unfortunately, the Ephors, the priests of Sparta, are insisting that the Spartans celebrate the feast of the Carneia, during which time Spartans cannot go to war. King Leonidas disobeys and takes a small force of 300 men north, joining up with some additional Greek troops along the way. Leonidas' plan is to force the Persians to meet the Greeks at the Hot Gates (Thermopylae, a narrow pass only a few dozen feet wide between the mountains and the sea) where the Persians' vastly superior numbers (120,000+ ) will not avail them. Whilst the Spartans hold off the Persian advance for three days of almost non-stop combat (fighting the Persian Immortals, gunpowder-throwing troops and war-rhinos and elephants, presumably from Persia's territories in Africa or India), Leonidas' wife Gorgo attempts to persuade the Spartan council to defy the Ephors and send the remainder of Sparta's 10,000-strong army to aid Leonidas.

The narrative is somewhat simple and straightforward, with frantic, balletic combat sequences at the Hot Gates mixed in with political maneuverings back in Sparta. These are not particularly complex, but do increase dramatic tension in the storyline. During the lengthy sequences where no dialogue is spoken on-screen, we get narration by Dilios (David Wenham, better known as Faramir from the Lord of the Rings movie trilogy), who is our Goebbels-like figure, relating the story of the battle to a Spartan audience some months later. Intriguingly, some of his dialogue is directly lifted from contemporary sources such as Aeschylus or later commentators like Plutarch for added effect. Because the movie is concerned explicitly with recreating scenes from the graphic novel, the acting is somewhat stilted and dialogue tends to be minimalistic, with plenty of emphasis on speeches and dramatic pronounciations (such as the infamous, "Tonight we dine in HELL!" or the "Come get them!" response to a Persian demand to lay down their arms, although interestingly this is actually mentioned in classical accounts of the battle). It is quite notable that the acting and dialogue in the sequences back in Sparta - a subplot established only in the film - is much more traditional.

Stylistically the movie is a tremendous achievement, with extensive CGI backgrounds and colour grading combining to give the film an almost unique visual identity of its own. The battle sequences are exceptionally impressive, if totally unrealistic, although the dramatic shifts between slow-motion and normal speed become rather boring after a while. Musically, the film shifts from a traditional score to a more rock-like theme which is used at moments of extreme drama or action, but it works reasonably well.

300 is definitely a very interesting film with a unique visual identity. The actors do a generally good job given the limitations they are working under. However, a lot of people can't quite get to grips with what the film is actually about and spend an enormous amount of time moaning about the Spartans not wearing armour, calling the Athenians boy-lovers when pedastry was actually instituionalised among the Spartan warrior class, having the Ephors as deformed priests rather than an elected council or kicking Persian diplomats down a well when in fact this was an incident from the earlier Persian invasion under Darius (and Xerxes didn't send diplomats to Athens or Sparta during his attack because of this). All of this is totally irrelevant: the film is a story being told by the highly imaginative Dilios to get the Spartan army riled up for the Battle of Plataea. His depiction of the Persians as lunatic dual-wielding masked swordsmen led by a ten-foot-tall androgyne (a near-unrecognisable Rodrigo Santoro, better known as the short-lived Paulo from Season 3 of Lost) is due to him wanting to portray the enemy as a monstrous force to be destroyed, and not because either the director or the writer wanted to make racist slurs against Iran.

That said, a lot of viewers may dislike the film simply because it is so ludicrously over-the-top on almost every level, from its snarling villains to lecherous old priests to gigantic war-rhinos. As for myself, I thoroughly enjoyed it.

300 (***½) is available now on DVD in the UK and the USA. The director, Zack Snyder, is currently filming a movie adaption of the seminal graphic novel Watchmen for release in 2009.
Posted by Adam Whitehead at 23:00

Email ThisBlogThis!Share to TwitterShare to FacebookShare to Pinterest
Labels: 300

agreed - if you let go and allow yourself to enjoy this movie it's great fun. And somewhere in there it captures a touch of that unselfconcious heroic-mythic legend-making vibe that Gemmel was so good with.