Graceling is the debut novel by American author Kristin Cashore. It is a stand-alone secondary world fantasy, although I'd hesitate to call it an epic fantasy. The writer is planning at least two more books set in the same world (the next one will be a prequel, called Fire), but Graceling is a single work mercifully lacking a cliffhanger ending. Interestingly, the American publishers are marketing it as a YA novel, although the British ones aren't. 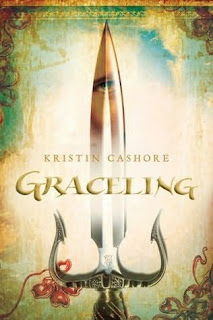 Seven kingdoms sit uneasily alongside one another, constantly raiding and counter-raiding one another. A secretive organisation known as the Council is helping the common people of the lands survive in these harsh times. Meanwhile, certain people in the world are born with extraordinary abilities called Graces. Someone with the Grace of swimming can hold their breath for huge amounts of time underwater and swim like a fish, whilst someone with the Grace of swordsmanship is a brilliantly talented warrior, able to predict an enemy's moves with stunning speed.

Katsa, neice to King Randa of the Middluns, has the Grace of killing. She is the King's assassin, his enforcer and, when necessary, his torturer. She hates the role and yearns for a less violent existence. When her role in the Council leads her into a conspiracy over the kidnapping of the King of Lienid's father, she is forced into an uneasy alliance with Po, the Prince of Lienid, a Graced warrior of exemplery skill. The path they follow leads to startling discoveries over their own abilities, and their confrontation with someone whose Grace makes them almost unstoppable.

For a debut novel, Graceling is well-written, nicely-structured and easy to read. The characters are well-drawn and the storyline intriguing enough to draw the reader along at a good speed. The notion of Graces, although not hugely original, is nonetheless explored in-depth throughout the book with some nice, logical extrapolations of the abilities on show.

However, there are some issues. The names of the characters and kingdoms are all somewhat whimsical and occasionally distract from the seriousness of the tale. This wasn't a huge problem for me, but given that I know that some people pointblank refused to read The Red Wolf Conspiracy because of it, I know it will put some people off. Also, the ending feels a little bit too neat. True, the author throws a wrench into the final couple of chapters that was genuinely unexpected and means the ending is hardly all happiness and light, but still, all the storylines are tied off nicely. The only big unanswered question, the background and motivations of the main villain, will be explored in the next book.

Balanced against these issues is a well-drawn tale featuring interesting protganosits in a decently-realised setting. Whilst Graceling won't be generating Rothfuss or Lynch levels of excitement for a debut novel, it's certainly enjoyable and well worth a read.

Graceling (***½) will first be released by Gollancz in the UK as an export edition on 20 November 2008, followed by standard tradeback and hardcover releases on 22 January 2009 (by coincidence, my 30th birthday). The US edition will be published by Harcourt Books on 1 October 2008. The author maintains a blog at this location.
Posted by Adam Whitehead at 15:58

Good review :) I enjoyed this one also. I think I sort of agree with the YA marketing -- not sure whether it's a Gollancz type book, in fact.

I'll probably review it in a little while -- have to get round to Greg Bear's latest first. It's rather large :O

Yeah, I've got that one too, but couldn't quite face it. I had flashbacks to Bear's Songs of Earth and Power, which is two weeks of my life I'll never get back again. When he's good, he's awesome, but when he's bad he's nearly unreadable. I'll probably try it 2 or 3 books down the line

Very nic review that made me curious about the book. And the cover art is interesting too :)