When it comes to gaming pedigrees, few come better than that of BioWare. Along with their partner companies, first Black Isle and later Obsidian and now (kind of) CD Projekt, BioWare have been involved with a gaming heritage to be proud of: Baldur's Gate, Baldur's Gate II, Planescape: Torment (probably still the definitive modern RPG), Neverwinter Nights, Star Wars: Knights of the Old Republic, Jade Empire and The Witcher, whilst their next game, Dragon Age, is already one of the most eagerly-awaited games of 2009. 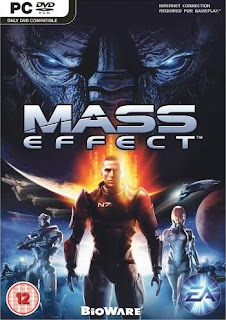 Mass Effect is a science fiction roleplaying game not related to any previous property, although it is also the first game in a trilogy. The goal with Mass Effect seems to have been to create an original universe and storyline which would combine BioWare's previous expertise in creating morally dubious situations with a more fluid 'run 'n' gun' combat system which owes more to first-person shooters than to roleplaying games. For this reason, Mass Effect has divided some audiences, particularly the hardcore RPG players who dislike action games. However, for those who enjoy both genres, Mass Effect is a successful hybrid of the two and a perfect jumping-on point for those who enjoy shooters but perhaps haven't been grabbed by RPGs in the past.

The setting is 200 years or so from now. Humanity has expanded into space, forming the Human Systems Alliance, and made contact with various alien species. Much of the Galaxy is controlled by the Council, three powerful alien races and several 'lesser' ones (such as mankind) based on the Citadel, an enormous space station located in deep space. Whilst Earth is the newest species in Council space, its rapid advancement has alarmed some of the older, more sedate species who fear losing their chance of a new senior seat which they've been working towards for millennia in favour of this new, younger race. This provides an interesting political backstory to the game, as whilst Earth itself is (refreshingly) not in danger, its political future is indeed in your character's hands.

You play Commander Shepherd (you can specify Shepherd's first name, gender and appearance, as well as his/her abilities), a capable military officer assigned to the Normandy, mankind's most advanced combat frigate. As the game opens you discover that a member of the Spectres, the Council's elite military force, has gone rogue and is searching for what appears to be an ancient alien superweapon. Your character is put on his trail, dealing with various side-missions along the way and acquiring a large collection of allies, weapons and abilities. Along the way many important revelations will be made about the true origin of the Citadel, the Council and its history.

Those who have played Jade Empire and Knights of the Old Republic will find much that is familiar, as the out-of-combat interface is virtually identical. Things have been streamlined somewhat (you automatically strip corpses of loot rather than having to do it manually) and the graphics are obviously superior, but the controls and viewpoint is very similar. Dialogue has been improved, with less emphasis on what you say as on how you say it and how it influences people's reaction to you. There also isn't any good/evil path to play, as it's possible to develop your 'polite' and 'severe' attributes simultaneously, which is more realistic.

When combat commences you switch to an over-the-shoulder view in which you can select weapons, give orders to your squadmates, take cover and make tactical decisions. It takes a little bit of getting used to, but once it's second nature combat becomes immensely satisfying. Unfortunately, you cannot directly control your allies' behaviour, only give them orders, and the AI is sometimes not up to the job, making your allies jump into your line of fire and run around in circles rather than seek cover. The game also has a very harsh system for treating wounds, with such a huge recharge between being able to use healing equipment that most of the time you can only use it once per combat.

There is a third control system as well. After landing on planets you sometimes have to make your way between locations using the Mako, a giant armoured buggy-thing. The Mako is not upgradeable, not particularly useful in combat and handles like your character downed a cask of whiskey before getting aboard. Apparently it's better than the 360 version, though.

Generally the game plays very well. My system is relatively low-spec compared to the game's demands but I was able to run almost everything at high settings with no major problems. I did run into one bizarre bug that prevented me from engaging any NPCs in conversation whilst on board the Normandy, which apparently locked me out of several side-quests and the game's romance storylines, but luckily it didn't prevent completion of the game. I will be looking again at the game once the imminent patch (hopefully) fixes this problem.

The game does have several flaws. First off, veterans of BioWare's previous RPGs may find that the mission structure is very familiar and at times, given the SF backdrop, there are moments when you suddenly think you're playing Knights of the Old Republic once again. Secondly, as mentioned earlier, the healing system is extremely harsh, forcing many frustrating reloads during combat. Thirdly, the basic storyline is extremely familiar, bearing more than a passing resemblance to both Knights of the Old Republic and Homeworld 2. Finally, whilst the game has a somewhat satisfying ending, the 'to be continued' nature of it is vaguely irritating. It would be nice to finish a game and that's it (see also Crysis), rather than it being the opening of a trilogy or something.

Mass Effect (****) is a solid, but somewhat familiar entry to the BioWare canon. The RPG/FPS hybrid effect works quite well, but the roleplaying situations do feel derivative of earlier BioWare games. However, no-one else in the industry makes RPGs as good as BioWare, and even an evolutionary game from them rather than a revolutionary one is worth a look. The game is available now on the X-Box 360 in the UK and US, and on the PC in the UK and US. Mass Effect 2 is currently in development, and a downloadable episode called Bring Down the Sky is available now for X-Box users, whilst it will be released shortly for the PC.

A Note on DRM
A huge amount of coverage of Mass Effect on PC has centred around the issue of DRM (Digital Rights Management) rather than the actual game itself. I chose not to engage with the issue in the review because, frankly, it's not the game's fault or BioWare's, but their publisher's (Electronic Arts in this case). Those planning to buy the PC version should be forewarned that you can only install the game three times before it locks you out, so those who change their hardware or reinstall Windows frequently should take care before purchasing. Given that every such invasive form of DRM previously used has been removed within a few months of release due to public outcries and its total failure to prevent piracy, I wouldn't expect this to be an issue indefinitely, and there are also ways of removing the DRM without resorting to hacks or cracks or the like, so for me it does not impact on the review score.
Posted by Adam Whitehead at 16:04

Veterans is misspelled veterens. Thought you might want to know.