Way back in 1994, early in the lifespan of its line of Star Wars tie-in novels. Bantam published The Jedi Academy Trilogy by the then-unheard of Kevin J. Anderson. A fanbase invigorated by Timothy Zahn's enjoyable, excellently-paced trilogy featuring Grand Admiral Thraw eagerly seized on any new Star Wars fiction that was being produced (explaining why the so-so Truce at Bakura and the awful Courtship of Princess Leia became instant bestsellers). In the case of this trilogy, this proved to be unwise. Featuring morally corrupt would-be Jedi who kill billions and then get forgiven by Luke Skywalker because they felt bad about it, and a superweapon that makes the Death Star look pitiful (a ship called the Sun Crusher which can destroy star systems and is indestructible), The Jedi Academy Trilogy appeared to be the ultimate work of deluded fan fiction. Naturally, it sold huge amounts of copies.

Soon enough, Anderson was everywhere. He was writing X-Files novels. His own creations, utterly unremarkable with the exception of the mildly diverting Climbing Olympus, were soon spreading insidiously over bookshelves everywhere. Could he not be stopped? And then the final ignomy: he convinced Brian Herbert to help him co-write the books that would continue Herbert's father's Dune series. 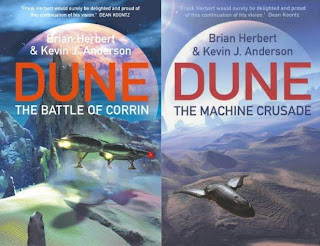 Readers braced themselves for something horrifying, but unexpectedly the Prelude to Dune Trilogy (House Atreides, House Harkonnen and House Corrino) turned out to be okay. Not great, obviously, but readable. Naturally, the books contradicted established Dune canon all over the shop and the characters only really worked because Frank Herbert had already established them, but compared to other cash-in books out there these were definitely nowhere near as bad as they could have been.

Alas, the same cannot be said for the Legends of Dune Trilogy. Set ten thousand years before the events of Dune, roughly the same amount of time into our future, the trilogy chronicles how humankind freed itself from slavery at the hands of the 'thinking machines' and embarked on a bloody war that after a century saw the machines vanquished and the great Imperium founded. As with the earlier trilogy, Anderson and Herbert almost immediately started deviating from established Dune canon: the Butlerian Jihad is depicted in the original novels as a much more equal war, with the humans deciding to destroy the machines after a cult of humans worshipping the AIs as gods is uncovered (hence the whole, "You shall not build a machine in the likeness of a human mind," stuff). This is also the version of the struggle Frank Herbert depicted in the 1984 Dune Encyclopedia and formed the basis of the notes for his own planned prequel novel (which he was apparently planning to write following the seventh Dune novel). For reasons that are not entirely clear, Herbert and Anderson decided that was lame and went with their own, original creation.

It is difficult to describe how inept this series is. The Dune universe is one that is rich in fantastic and original concepts, worlds and characters. To make it appear to be bland and silly actually takes some skill, skills which the authors clearly brought to this project with enthusiasm. The characters are, at best, two-dimensional cyphers. The AIs are incredibly stupid and do not operate with anything approaching logic. The preponderence of force on the AIs' side is so ridiculous the human rebels should not even have the slightest chance of victory (hence why in Frank Herbert's original vision the two sides were equal to start off with), let alone the freedom to spend decades developing their Holtzman shields, las-guns, spacefolding technology and so forth. Also, we are led to believe that not just the Imperium and the Houses, but also the Bene Gesserit, the Suk School, the Spacing Guild, the Fremen, the swordmasters of Ginaz, the Mentats, the face-dancers and just about every single other concept in the Dune series was established simultaneously (in Herbert's original plan the Bene Gesserit had already existed for centuries, albeit with a different agenda) in an awe-inspiring display of pure fanwank.

Does this series bring any positive qualities to the table? No. The plotting is so mechanical it feels like it was procedurally generated by a computer algorithm. The characters are cyphers at best, who do not operate in accordance with generally-accepted principles of logic or intelligence. Vast reams of the three books are taken up by tedious info-dumping and exposition. This is a cold, cynical exercise in making money from fans starved of new material for too long by two authors who have lost whatever credibility they once had in the genre.

The Prelude to Dune Trilogy (*) is a work that can only justly be described in terms not appropriate for polite blogging. Whilst it is true that the original Dune novels by Frank Herbert themselves went off the boil in later years, even the worst of them is preferable to this drivel. Avoid.

A more concise review is given by the webcomic Penny Arcade at this location.
Posted by Adam Whitehead at 15:45

Seriously though, it's so frustrating to see classic franchises ruined in this fashion - partly by the author's son, no less - all for a fat wad of cash. Depressing.

Just FYI, Frank Herbert did not write the Dune Encyclopedia. Even the Orthodox Herbertarians don't consider the DE as canon.

I guess the lesson to be learned here is that if you are a great writer and have children you should encourage your children to get poor marks in school so thay can remain illiterate and drop out while they are young. Pack them off to trade school to become plumbers or something, or better still, encourage them to get into the drug trade so that you can inform on them and have them sent off to prison. With a little bit of planning and little bit of luck you should be able to prevent your children from ever becoming writers and ruining your legacy. I am sure that Frank Herbert, wherever he is now, is wishing that he had followed this advice.

This review and the comments tell me that I made the right decision when I decided not to read the Dune books after Frank.

I've just re-read House Corrino (and am ashamed to say I own the other 2 in the first trilogy). All 3 are off to the local charity shop - utter drivel.

All of these books by the son and Kevin Anderson were a total let down. If they had released their version of book 7 first (before the myriad of prequels) they wouldn't have written another book in their careers!

Frank Herbert's books were incredible reads (book 4 being a tad difficult to stick with but 5 and 6 were the best of the lot). These pale, lifeless, simple, wooden imitations were just...crap.

Sorry Brian / Kevin, a legion of fans wanted you to be great writers and finish off the series well, which Frank was unfortunately never able to. But stop writing them! Now!

Thank you for the warning. I've had the Prelude to Dune on my shelves for a few years now, and only once gave THE MACHINE CRUSADE a shot; I set it down after less than a hundred pages, and I don't even remember why now. Perhaps I knew in my guts that it wasn't up to Frank Herbert's original. DUNE was the first great novel I ever read, way way back in the summer before the David Lynch movie came out, and I spent my teen years utterly devoted to the series; when Herbert died in 1986 I was devastated. Now I know better than to waste my time on the prequels.

As far as the accuracy of the DUNE ENCYCLOPEDIA goes, I love that book and its perspective from a time long after GOD EMPEROR OF DUNE lends interest, but it certainly isn't wholly accurate--they got the axolotl tanks all wrong, for example.