Toll the Hounds by Steven Erikson

Another year, another book in Steven Erikson's enormous Malazan Book of the Fallen series. Toll the Hounds is the eighth novel (of ten) in the series, but given that the final two books are one immense story split in half for length, it is also the penultimate chapter of this series. 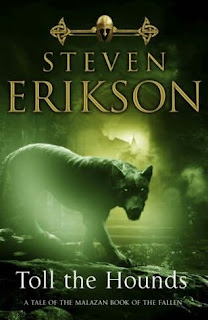 The continent of Genabackis, two years (or so) after the war between the Pannion Domin and an alliance between the Tiste Andii under Anomander Rake, the mercenary companies under Caladan Brood and a Malazan army under Whiskeyjack and Dujek Onearm. In that war half a dozen major cities and the floating fortress of Moon's Spawn were destroyed, and the final Pannion refuge in the city of Coral was devastated and occupied by the Tiste Andii. The city is now cloaked in endless night and known as Black Coral. The shattered remnants of the Bridgeburners - Mallet, Spindle, Picker, Bluepearl, Blend and Antsy - have settled in Darujhistan to run a bar whilst a shadowy group of mages awaits the long-prophecised coming of a Tyrant who will conquer it. From the west Cutter, once a Daru thief named Crokus, is returning home with a motley crew of adventurers from across the world, whilst in the south of the continent three separate groups of travellers have arrived on missions of their own. In night-shrouded Coral, Anomander Rake broods and his sword, Dragnipur, drinker of souls, becomes restless...

Toll the Hounds takes us back to where the series began in Gardens of the Moon nine years ago, Darujhistan of the blue fires, and it is with a tremendous sense of nostalgia that reader is reunited with many favourite characters from that novel and Memories of Ice, not to mention a few more familiar faces as well (some of whom get spectacular entrances). This time around the novel is not as packed with dizzying revelations and huge battles as the previous three volumes in the series, but rather than take this opportunity to shave off a few hundred pages from the book, Erikson instead takes advantage of this to paint the city of Darujhistan in much greater depth and detail than any other city in the series, moving between numerous 'lesser' POVs among the common folk of the city and events both huge and mundane in their lives. As a result Toll the Hounds is much slower-paced than any other book in the series. To a certain extent this may invite the reader to groan, but Erikson compensates for the lack of incident with deeper characterisation and motivation than ever before.

Toll the Hounds is also the Malazan series' most thematically-developed and tightest novel, with notions of family, responsibility and the role of desire all coming in for examination. Unfortunately, Erikson hasn't lost or scaled back on his tendency to have ordinary commoners spouting out philosophical arguments like Proust, but this late in the day the average reader of this series will be prepared for it. To make up for this Toll the Hounds is the funniest book in the series by some margin and, oddly given his much greater presence in the prose style (Kruppe is recounting the narrative to two other characters, and most chapters in the book open and close with Kruppe's short commentary on the events), the divisive character of Kruppe is kept to the background and only comes to the fore in a few short, memorable scenes.

As usual, events build to a huge finale and whilst the scale of those events is not in the line of the vast battles in Reaper's Gale or Memories of Ice, the significance of these events is much greater, and the stakes are definitely raised higher as the final two volumes of the series approach. Excellent humour and some major deaths and some huge revelations make Toll the Hounds essential reading for fans of the series, and if Erikson fails to overcome his standard faults, at least he doesn't exasperate them or introduce new ones with one notable exception: the timeline, which has been very problematic on occasion, is completely shot to hell in this book with several characters appearing who are much older than they should be.

Toll the Hounds (****) is available now in the UK from Bantam Books. Tor will publish the US edition in September. Ian Cameron Esslemont's second Malazan novel, Return of the Crimson Guard, is published in August in the UK (no US date set as yet), and a review is forthcoming. The ninth novel in the series, Dust of Dreams, should be published in approximately one year's time.
Posted by Adam Whitehead at 19:12

Email ThisBlogThis!Share to TwitterShare to FacebookShare to Pinterest
Labels: steven erikson, the malazan book of the fallen, toll the hounds

I just read your review of Toll the Hounds on Amazon and I am relieved. First of all let me say that I always appreciate your reviews as they are often very much in line with what I feel about the book in question. This said I am glad to see you give Toll the Hound 4 stars as I was reading some rather negative reviews and I was fearful of a let down. My copy is still on the postal route somewhere and I can't wait now to get it!

Anyway, that's what I wanted to say. Thanks very much for your reviews, they have lead me to some excellent readings over the years.

Regards from the Netherlands

Cheers! Toll the Hounds I think is going to be the most confounding book in the series to date. It's a bit of a departure from the previous volumes in tone and mood, and I think a lot of people are going to love or hate it. I can only really go by my reaction to it, which was that it is good :-)

This sounds promising. I just reread Reaper's Gale for the first time and only enjoyed it slightly more than the first time through, which is to say I found it sub-par to the rest of the books in the series. It was very slow and extremely anti-climatic after building up so much anticipation and tension over the course of two novels. A change in tone would be great at this point! My copy is supposed to finally arrive tomorrow.

Can't wait to read this! Too many doorstoppers to read though. This, Anathem, Blade of Tyshalle, etc...