Ghost in the Shell

Ghost in the Shell is a 1995 anime directed by Mamoru Oshii, based on the manga by Masamune Shirow. Like the earlier Akira, Ghost in the Shell broke out out the traditional anime/manga fanbase and won a large following, including the Wachowski brothers who used some of its ideas and motifs in The Matrix a few years later. 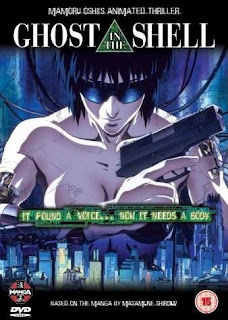 The setting is Hong Kong in 2029 and chronicles an intercine power struggle in the justice and law-enforcement agencies of the city, with most of the protagonists belonging to Section 9, whilst the antagonists belong to the government and Section 6. A number of innocents, criminals and agents belonging to Section 9 get caught up in this whirlwind of conspiracies and violence. The main character is Major Motoko Kusanagi, a cyborg who finds herself riven by existential questions over her nature and consciousness whilst investigating the activities of a criminal known as the Puppetmaster.

The movie version of Ghost in the Shell is notably less complex than the manga or the later TV Stand-Alone Complex TV series, stripping away a lot of secondary storylines to focus on Kusanagi's dilemmas and the Puppetmaster storyline. As a result, Ghost in the Shell is a surprisingly approachable anime for those not versed in the genre (especially for those whose only contact has been Akira or other notably dense anime). The storyline is reasonably complex and operates on multiple thematic levels, but events and charcter motivations are depicted clearly and elegantly. The movie is notable for its use of music - especially a gorgeous but unsettling choral piece - and lengthy, well-animated establishing shots to cover moments of character introspection.

This is a thoroughly intriguing and thought-provoking movie which raises many of the same issues as the later Matrix but investigates them far more elegantly and with a less tedious running time. There are a few criticisms, though. A couple of scenes are rather heavy on the exposition and some of the secondary characters are not as well-developed as might be wished. For example, Motoko's partner Togusa initially appears to be an important character and as the least cybernetically-enhanced member of Section 9 is set up to be an 'in' for the ordinary viewer into this cyberpunk world, but he quickly fades into the background in favour of the (admittedly more interesting and dynamic) character of Batou.

Overall, this is an intelligent and well-made science fiction move that asks some interesting questions and doesn't provide easy answers.

Ghost in the Shell (****) is available in a double-pack with its sequel Innocence from Manga Entertainment in the UK and as a stand-alone release in the USA.
Posted by Adam Whitehead at 15:33

Email ThisBlogThis!Share to TwitterShare to FacebookShare to Pinterest
Labels: ghost in the shell

If you haven't already seen it, the Ghost in the Shell: Sand Alone Complex TV series is an improvement on the original GitS in pretty much every way.

When I get blockbuster online again next fall this is goin on my queue. I liked the anime movies I watched last year, but I admit they were all by Hayao Miyazaki. I wanted to break away from Miyazaki but I didn't know where to go. It sounds like Ghost in the Shell is a good place to start. Thx :)