The first half of Battlestar Galactica's fourth season came to an end with an explosive, revelation-packed episode that seemed to finally shake the show out of its somewhat plodding pace and deliver the kind of quality we haven't seen since the Exodus two-parter at the start of Season 3. Before it aired the producers had bigged it up, claiming that the end was more jaw-dropping than the occupation of New Caprica. They weren't wrong about that. But before we get to that point there's another 40 minutes of drama to get through. 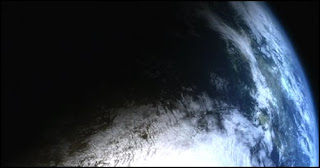 The resurrected D'Anna Biers (Lucy Lawless clearly having a thoroughly great time) wants the four Cylons who are in the fleet and plans to hold Roslin and the Viper pilots from the Hub mission hostage until they are handed over. "Where's the Fifth?" Roslin enquires, about half a second after the entire audience has asked the same question, but D'Anna dodges it. Tory quickly finds a way of jumping ship and revealing herself as a member of the Five, but Tyrol, Tigh and Anders are much more reluctant to come forward. Starbuck starts planning a rescue op, but the chances of success before either the hostages are killed or the basestar fires on the civilian ships in the fleet seems limited. With the stakes growing by the minute, Colonel Tigh finally 'fesses up to Adama: he is a Cylon, activated by a signal in the Ionian Nebula.

This is the first masterclass scene in the episode. Michael Hogan and Edward Olmos give their all in this scene. Adama looks first confused, then suspicious and then finally enraged. Tigh, on the other hand, is first ashamed for keeping this secret for so long and then finally seems almost joyous to be relieved of his burden and able to give Adama a weapon to use against D'Anna. Whilst that may be true, this is one shock too far for Adama, who finally experiences a kind of mini-breakdown. Jamie Bamber, who has always been effective but rarely outstanding as Lee, finally comes into his own here. The scene of the son trying to comfort his crying, broken father is a powerful one and the two actors sell it completely (even going into method when Adama drools over his son's hand and Bamber just keeps going). Adama has been the bedrock of this show, the unmovable object which anchors everything down, and to see him finally cracking after 65-odd episodes of disciplined stoicism is a shock. With Adama out of commission and Tigh revealed to be a potential enemy agent, Lee has to step up to the plate and does so decisively, slugging Tigh, putting D'Anna firmly in her place and making the hard calls. Whilst the route that Lee took to becoming President may be highly questionable, once he's in that place you finally see where his arc has been heading since the mini-series, and it's a relief to see that it works and that the character and actor can handle it.

Elsewhere, all of the four have heard a signal drawing them to Starbuck's Viper. Anders, Tyrol and Starbuck's investigation is curtailed by Tigh giving up his fellow Cylons. Now we're in a classic BSG stand-off (D'Anna loves these: she was at the heart of the one that caused the Season 3 mid-season cliffhanger as well), with the Cylons threatening to airlock the hostages if Tigh, Tyrol and Anders aren't handed over and Lee threatening to do the same to the three Cylons if the hostages aren't released. Even Baltar's entreaties to D'Anna (whom he's been quite intimate with in the past) don't seem to have much impact. Obviously something else has to resolve the stand-off and that is accomplished by Starbuck, after futilely fiddling around with the DRADIS and black box recordings and other electronic gizmos on her Viper, comes up with the idea of switching the radio on. Sure enough, she picks up a Colonial transponder system leading to a star system a few light-years away: Earth.

The convenient neatness of this plot twist will probably infuriate those who have felt that BSG has moved away from the hard-edged realism of the first season and a half or so and become dependent on mystical hand-waving to resolve its plot threads. Refreshingly, this is actually challenged in the episode itself with Lee and Starbuck finally concluding that a 'higher power' is orchestrating events for their own purposes, rather than stuff happening for the sheer hell of it. Irritatingly, this isn't followed up on in the episode itself, but it still gives our heroes a way out of the impasse and no doubt paves the way for plotlines to come (the 'higher power', I suspect, will be the same force behind Head-Six and Head-Baltar, who have been notable for their absence from the last few episodes). The hostages are released, a broken Adama is healed somewhat by Roslin's return, the Penultimate Four are given an amnesty, Lee earns Roslin's respect and the humans and Cylons agree to go to Earth together. 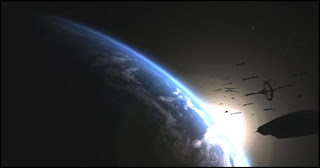 The final act opens with a soaring blast of choral music. Composer Bear McCreary was asked to do something special for this episode and complied with a stunning piece called 'Diaspora Oratorio' (more on how he created it here). The fleet has moved towards the signal and is now a single jump away. Roslin gives the order, the fleet jumps and there is a moment of tension whilst the navigation crew work out where they are. The reports come in: the fleet has arrived intact in orbit above a blue-white planet. The constellations match the patterns recorded in the Temple of Athena on Kobol (in Season 2's Home, Part 2) exactly. Admiral Adama delivers the speech he's wanted to since accepting the reality of Earth's existence at the start of Season 2:

"Crew of Galactica. People of the fleet. This is Admiral Adama. Three years ago I promised to lead you to a new home. We've endured a difficult journey. We've all lost, we've all suffered, and the truth is, I questioned whether this day would ever come. But today our journey is at an end. We have arrived, at Earth."

There are mass celebrations. The CIC degenerates into cheering and shouting. There are shots of people celebrating throughout the fleet, even on the refinery ship. But against the happiness and celebrating there are moments of discord: Starbuck looking at the wall of the fallen showing those who haven't made it (particularly Kat); Tyrol playing with his motherless son; Tigh staring blankly into his bottle. But overall the feeling is one of relief and happiness. McCreary's score builds to a finale and we fade out over a shot of Earth. Damn, are they going to leave us there for seven months? But no, there's still another two minutes on the clock.

A detachment of Raptors, Cargo Lifters and Cylon Heavy Raiders drops through the atmosphere. Cut to a shot of Adama's hand sifting through the soil, whilst a giger counter clicks alarmingly. He looks pretty pissed off. A slow, deliberate pan takes in Roslin (who can only stare vacantly and say, "Earth,"), an utterly horrified D'Anna, the grim-faced Agathons, a blank-faced Anders (who brushes off Tory when she reaches to him for comfort), a devastated Lee, a despondent Baltar, a totally shocked Tigh (who similarly doesn't react when Six tries to comfort him), a strangely laughing Tyrol, a despondent Dualla, a grieving Leoben and, finally, Starbuck, who looks like she's regretting having led her friends to this place. The camera keeps going, taking in a twisted dome-like building before moving across what appears to be a large island, covered in the ruins of shattered skyscrapers before finally ending on the remnants of a broken, huge bridge. Fade to black.

This shot may go down in history as the most powerful thing the show has ever done. Building up the viewer's hopes and expectations over what Earth is through the partying and celebrating in the fleet, and then delivering a kick to the balls of monumental proportions by showing what appears to the ruins of a nuclear war. It's a deliciously dark image and one that leaves the audience's jaws on the floor and desperate to know what happens next. What does the fleet do now? Is the entire planet uninhabitable or are there remote areas free of radiation where the colonists may settle? Are Cavil and the other Cylons still on our heroes' trail? Who is the Final Cylon? Who or what has manipulated the humans and Cylons into coming to Earth if it's just a burned-out wasteland, and for what purpose? Where is the signal that Starbuck's Viper picking up coming from? And if this is a future Earth, where are its communications satellites? Could some people have escaped whatever happened before the end and fled somewhere else in space? It's going to be a long, cruel wait before we get the answers. During that time expect every frame of that final shot to be scrutinised in-depth (is that New York? Or Sydney? Tokyo? Vancouver? Or some future city not even dreamed of as yet?) and every interview and utterence from the producers to be raked over for clues.

Forthcoming: Sometimes a Great Notion, The Disquiet That Follows My Soul, The Oath, Blood on the Scales, No Exit, Someone to Watch Over Me.

The second half of Season 4 will start airing in the 'first quarter' of 2009, with January mooted as a possible date. Between now and then there will be ten webisodes directed by Jamie Bamber and James Callis that link the two halves of the season. It also appears likely that there will be an additional TV movie which will be filmed in the summer and screened around November time, but this hasn't been formally commissioned yet. The first half of Season 4 will be released on DVD in the USA in December, but at the moment it looks like the Region 2 release won't be until next year, so the season can be released in one go.
Posted by Adam Whitehead at 16:46

re: the city at the end, I think it's almost certainly New York -- the stump of bridge looked distinctively like the Brooklyn Bridge to me, and the geography seems to match.

The producers are remaining really tight-lipped on it. There's also an island just to the left of the main island which looks very square and seems to have a pedastal on top of it, which I'm pondering might be a statue-less Liberty Island.

However, it's all too vague to make a positive ID. We'll see when the show comes back. A LONG time from now.

Very good review, Adam. The episode was great and the end is one of the best HOLY SHIT moments I can remember on TV.