Major US Fantasy Series Hits the UK in September

In the past couple of years a few major SF and fantasy series long-standing international repute have finally landed in the UK, most notably Celia Friedman's Coldfire Trilogy, which finally appeared sixteen years after its US publication, and Andrzej Sapkowski's Witcher books, the English translation of which has been a long time coming. The next big author to arrive is Glen Cook, whose Black Company series has met with tremendous critical acclaim and garnered a legion of fans, not least of whom is Steven Erikson, who admits that the Malazan Book of the Fallen was inspired by Cook's tales. 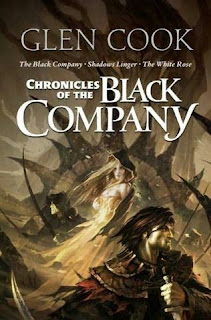 Gollancz have more info on this title here and preorders can be made on Amazon here. The book is already available in the USA. Expect a review around the time of publication.

With the simultaneous publishing of Sapkowski's Blood of the Elves on the same day (more details here) and Solaris making a big push for Paul Kearney's underread and underrated Monarchies of God series (available in two volumes, Hawkwood and the Kings and Century of the Soldier, in the late autumn), it's a great time to be able to catch up on some excellent fantasy that's not been available in the UK before, or out of print for a long time.
Posted by Adam Whitehead at 14:24

About time too! :o)
As a series it suffers from being uneven in places but the first three books are damn fine from where I'm standing... *nods head emphatically*

Adam,
I know I'm going necro here, but is there any update on these omnibus editions? I can't find anything in a google search.