The Ten Thousand by Paul Kearney

A few months back I noted The Ten Thousand as being one of my hot tips for 2008. Reading a lengthy preview that the author sent me a while back reinforced this feeling, and now reading the complete novel has confirmed my initial guess. Probably the most underread author in epic fantasy has delivered his strongest novel to date. 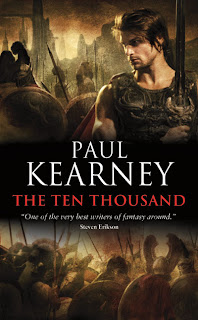 The Ten Thousand is based on The Anabasis, the best-known work of the Greek writer Xenophon. In that book Xenohpon relates how a Greek mercenary force of ten thousand warriors was hired by Cyrus the Younger, a Persian prince seeking to supplant his brother. When Cyrus was killed, the Greek army had to fight its way out of the now-hostile empire and find its way home.

In this novel the setting is the world of Kuf, which is divided between two humanoid species: the Macht and the Kufr. The Macht live in a mountainous peninsula made up of feuding city-states (reminsicent of Greece), whilst the Kufr inhabit the vast Assurian Empire to the south-east which dominates a huge continent. Many of the most famous mercenary companies of the Macht are summoned to the capital where a vast host is being assembled to sail across the sea and join the armies of the Assurian pretender Arkamenes, who seeks to usurp his brother, Ashurnan. Amongst these are Gasca and Rictus, two young warriors who join up for very different reasons, the former to see the world and fight, the latter to forget the horrors of the destruction of his city and family. As the story proceeds we meet other characters: Jason, the young and charasmatic commander of one of the mercenary companies; Vorus, a Macht living amongst the Kufr who is an advisor to Ashurnan; and Tiryn, Arkamenes' consort.

The story unfolds similar to the events of history, with the Macht fighting their way into the very heart of the Empire where Ashurnan awaits them with a vast host. There, at the Battle of Kunaksa, the hinge of the world will turn, with dire consequences for everyone involved.

As normal, Kearney anchors the story on his characters: Rictus, the young warrior lost in his grief and rage who finds opportunity and responsibility thrust upon him; Jason, the popular commander who doesn't know what he wants from life until, amidst the blood and mud, he finds it; Vorus, the exiled warrior who finds his loyalties and admiralties torn; Ashurnan, a ruler desperately trying to be a great king but not knowing how, whilst his brother believes he is great and worthy and doesn't realise the truth; and Tiryn, whose own preconceptions and believes are put to the ultimate challenge. They are flawed people, but the reader cannot help empaphising with them and the increasingly harsh challenges they face.

Kearney has previously attracted the reputation of doing battle sequences better than almost any other writer in the genre, better than Bakker, Martin or Erikson, with perhaps only Gemmell and Cornwell at the very height of their powers challenging him. The battles here are hard, brutal affairs but they are also used to make the characters change and grow, with every engagement also reflecting some revelation or advancement in the characters. It is an excellent device, perhaps not a conscious one, but handled superbly.

In this one novel (The Ten Thousand is a stand-alone, although Kearney does not rule out other works set in the same world) Kearney successfully encapsulates all of his strengths as a writer, making for his tighest, most satisfying novel to date, and may possibly have just given us the best epic fantasy of 2008.

The Ten Thousand (*****) is an engrossing, superb novel of war and its impact on humanity with a fitting ending. It will be published by Solaris on 1 September 2008 in the UK and in October in the USA.

Speculative Horizons reviews the novel here. Realms of Speculative Fiction reviews it here. Graeme's Fantasy Book Review covers it here. A Dribble of Ink has a two-part interview with Paul Kearney here and here.
Posted by Adam Whitehead at 15:51

Great review. Interesting to see that all reviews so far are very positive indeed. I definitely agree that this could one of the best novels of 2008.

Cheers for the link!

Everyone seems to be loving this, and I'm just frothing to get my hands on it!

Isn't The Anabasis the same epic on which The Warriors is based? Sounds like a good read.


(Also, an earlier comment reminds me I need to work out some way to get a copy of LAoK on this side of the Atlantic.)

If you're living in the US, just order a copy from Amazon.ca. It's been released here and shouldn't cost that much to ship it over the border.

Much easier than ordering it from overseas.

Amazon.com have copies of the English trade paperback version in stock for $25. Not sure if that's good value or not.

The Anabasis was also the inspiration for The Warriors, correct :-)

I just read this one and loved it utterly, completely without reservations. I know that you're more well versed in the genre I'd really appreciate it if you could guide me to other stuff similar to this. Something epic with enormous battles like this one.