Cloverfield managed the impossible when it slipped into cinemas back in January: a very low-key, relatively low-budget production with an innocuous name, it managed to pass unnoticed until just a couple of months before release, when Paramount's publicity machine swept into operation. The producer is JJ Abrams, the co-creator of Alias and Lost and the director of Mission Impossible III and the new Star Trek movie, so his name immediately generated a lot of interest. The result was a bit of a sleeper hit, winning critical acclaim and popular success in what is typically a very slow month at the cinema. 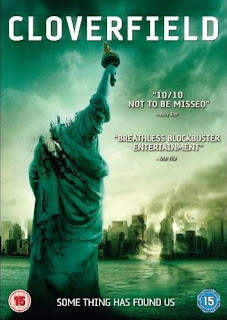 One possible way to sum up Cloverfield is to call it Godzilla meets The Blair Witch Project with a ton of 9/11 imagery chucked on top. The POV for the movie is a guy given a camcorder at his friend's leaving party and told to go record a bunch of 'goodbye' messages for him. Halfway through the party the city suffers a momentary power failure. Suddenly massive explosions can be seen in the distance, the Woolworths Building collapses into a pile of rubble and the head of the Statue of Liberty lands in the street. Clearly something is up.

From there the pace doesn't let up. Our four intrepid heroes (who aren't actually particularly heroic) initially attempt to flee the city via the Brooklyn Bridge, but then have to return to Manhattan to rescue the ex-girlfriend of one of the characters. Along the way they have various encounters with what appears to be a genuine huge city-destroying monster and its parasites. Along the way they see the attempts by the US Army and Air Force to take the monster down, and discover some horrible things about its abilities along the way. The ending is extremely dark and not what you'd expect from a typical monster movie (there is also an audio clip at the end of the credits that is somewhat disturbing).

First off, the camcorder POV works pretty well. You have to swallow some disbelief that during the scenes of chaos and fury the camera would conveniently always end up pointing in the right direction whilst the person carrying it is running for his life, but then this is a movie about a 500-foot-tall monster tearing up New York City. Picking nits about the camera work is probably a bit redundant. Unfortunately, the camera movements can be extremely jerky, with sudden shifts in perspective and very dizzying moments combining to induce nausea in the viewer. Neither myself nor the friend I watched the movie with have ever suffered from such problems before in a movie, no matter how loud, confused or gory, but during Cloverfield we both experienced bouts of dizziness and vertigo. Very strange, but then we were using a massive projector screen. The effects will no doubt be much less pronounced on a standard-sized TV set.

The camcorder approach also strengthens the storyline. Whether the monster comes from outer space or from the depths of the ocean is irrelevant really, and any attempt to explain the monster's origins would probably draw more attention to its innate silliness. Instead, we get to the meat of the storyline pretty quickly. The opening 10-15 minutes at the party also do an effective job of establishing the characters and making us sympathise with them. The actors are largely unknown but all do solid jobs of selling the situation as well.

There are a few other problems. One character suffers a debilitating wound that should really either have killed them or knocked them out through shock, but they recover remarkably quickly. There is also a scene where the main characters are accompanied by two military personnel, armoured and armed, and they die extremely easily whilst our unarmed, unarmoured and untrained civilians walk away without a scratch on them. But again, these are hardly major criticisms and you could say the same about almost any other monster movie. What has caused a bit more of a furore is the use of a sequence which is nearly identical to some well-known camcorder footage of the Twin Towers coming down: a skyscraper collapses, the wall of dust and debris shoots down the street, our characters take cover in a nearby store, and then emerge onto the dust-enshrouded street. Whilst it adds an element of realism to the film, and from a technical standpoint is an absolutely stunning achievement, there is perhaps the feeling that the film-makers were deliberately trying to invoke the same kind of terrors people experienced on 9/11 as part of a cinematic thrill, and them doing that is in questionable taste. The ending is also rather too obviously left open for a sequel.

Cloverfield (****) is an interesting, innovative take on the standard monster movie formula that succeeds in drawing the viewer in and doesn't have a cheesy, high-five happy ending either. I would certainly recommend it, but for once not on the big screen. The film is available in both a standard DVD edition (UK, USA), a special edition with extra special features (UK, USA) and on Blu-Ray (UK, USA). Apparently Cloverfield 2 is already in development, but the director and producer have indicated that they may wish to explore other projects before proceeding with it.
Posted by Adam Whitehead at 14:48