The second season of Avatar picks up where the first left off. The Northern Water Tribe has successfully defended itself against a Fire Nation invasion, with the help of the Avatar, Aang. With Katara having mastered Waterbending and now capable of teaching Aang, Team Avatar (as Sokka dubs the group) heads south into the Earth Kingdom to find Aang someone to teach him Earthbending. Meanwhile, Prince Zuko and his uncle, General Iroh, have been exiled and outcast by the Fire Lord, who has sent his daughter Azula to hunt down them and the Avatar. To this end she recruits two fellow female warriors to succeed where her brother failed. 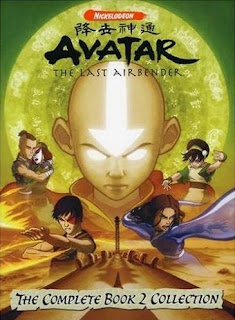 Season 2 starts off with our heroes on a high after their victory over the Fire Nation and their securing of the Northern Water Tribe as allies. Their luck seems to hold up, with the Fire Nation apparently keener on tracking down the 'traitors' Zuko and Iroh than pursuing the Avatar, and they soon meet Toph, a blind girl who 'sees' through Earthbending and is the teacher Aang needs. However, no sooner has Toph joined the group then things start to fall apart: a valued member of the team disappears without a trace, the Earth Kingdom capital of Ba Sing Se comes under attack by the Fire Nation and political intrigue within the Earth Kingdom weakens the allied forces as the Fire Nation advances.

Avatar's second season (or 'Book', in the show's own parlance) is a splendid follow-up to the first. It's the middle part of the trilogy, but if it adheres to an existing format, thankfully it's the original Star Wars trilogy: Earth is The Empire Strikes Back of this story, putting our heroes through the wringer emotionally, physically and mentally, and ending on a surprisingly downbeat note. The notion of 'mentorship' is investigated thoroughly, with Aang's mastery of bending now in the hands of two people barely older than himself, whilst Zuko's relationship with Iroh goes through some tough times. In fact, it's the internal war between Zuko's dual natures over his soul which forms the most satisfying through-line of the series, and Zuko's painting as a young man tortured by his own past with his own strengths and weaknesses rather than as a simplistic bad guy, or a bad guy who turns to good, is a surprisingly mature theme for what is apparently a kid's show.

Many individual episodes are of note, although Tales of Ba Sing Se is especially noteworthy. With our heroes forced to stay in the Earth Kingdom capital for a protracted stay, this episode doesn't feature a major crisis but instead follows them on several minor plot strands, from Sokka getting into a haiku-off with some poets ("That's one too many syllables!") to Aang establishing a zoo to an especially splendid instalment in which Iroh pays tribute to his late son. It's an extremely accomplished episode, as is Appa's Lost Days, in which the most under-explored member of the team gets his very own episode. However, there are far less stand-alones this season, with every episode linking into the main story arc and minor characters from the first season returning with more concrete roles.

With its second season, Avatar continues to impress, exploring themes of redemption, honour and extreme property damage in a consistently intelligent and amusing manner.

Avatar: The Last Airbender - Book II: Earth (****½) is available on DVD in the USA, but has not been officially released in the UK yet. Import Region 1 copies can be found on Amazon.co.uk. Season 3 returns to Nickelodeon for its final five episodes (also the final five episodes of the series) in mid-July.
Posted by Adam Whitehead at 10:25

Great review! I agree that Tales of Bah Sing Se was one of the best episode. Zuko Alone was also one of my favourite, would it be only for the western atmosphere. Good points about mentorship being examined.

Really? That's a cool reference. The totalitarianism stuff was also cool but I was thinking I might drift into spoiler territory by discussing that (and some parts of the review are borderline at the moment).

Great review! I think you did a good job at covering the most important plot points of the second part without giving away the real twists. I'm very much in love with the narrative structure of the show, that gives almost every episode an individual "tone", sometimes as a homage, sometimes as a parody.