Roger Zelazny has the reputation of being one of the most interesting and innovative speculative fiction writers of his generation. His Amber novels are regarded as classics of fantasy and Damnation Alley is highly regarded to this day. Unfortunately it wasn't until recently that I got into his work, starting with his Hugo-winning 1967 novel, Lord of Light. 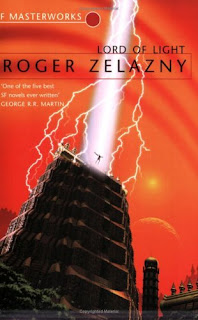 The setting is the distant future. Earth - now called Urath - is nearly forgotten. Mankind has settled a distant colony world, but the original crew of the colonisation ship have, through advanced technology, become extremely powerful beings and taken on the mantle of the Hindu gods. The general population is kept in harsh, downtrodden servility to these deities. Advanced AIs and the gods judge the 'karmic debt' of each person when they die, deciding if they are to be reborn in another human body or reincarnated as an animal or elevated to godhood. It is the ultimate hierarchal structure, designed to keep the powerful in power and the downtrodden under the heel. Every time a major technological discovery is made, the gods crush it with merciless force to ensure that the status quo continues.

One person thinks differently: Mahasamatman. He is one of the First, but has never claimed to be a god. But then, he has never claimed not to be a god. He refuses to believe in the innate superiority of the gods and finds what they have done to the people they were supposed to be protecting and serving repellent. To this end he carves an identity for himself as the Lord of Light, Buddha, and seeks to bring about the end of his world...

Lord of Light is an exceptionally clever, thought-provoking and intelligent novel. It is an incredibly fresh work. 1967? It could have been written yesterday. Zelazny is a funny and poetic writer, approaching each chapter, each interlude and each character from a slightly different angle, sometimes invoking rich mythic imagery. He bears some influences on his sleeve: at some moments the book feels like a Hindu cover version of The Dying Earth (complete with Vancian dialogue exchanges), but only momentarily. The mystery of how a futuristic, space-faring civilisation became a dramatic reenactment of Hindu mythology is never fully explained, but Zelazny gives us enough clues to work out ourselves how it happened. He also packs a hell of a lot into this 300-page tome, including vast wars and battles, struggles with body-stealing alien entities, brief-but-intriguing philosophical discourses on the nature of humanity and humourous monkey episodes. It's a story about myth, power and absolute corruption that resonates as strongly now as it did forty years ago.

Lord of Light (*****) is yet more proof that Gollancz's SF Masterworks list is one of the best, most definitive lists of the SF&F classics anyone could ask for. It is available in the UK from Gollancz and in the USA from Eos.
Posted by Adam Whitehead at 16:49

The mystery of how a futuristic, space-faring civilisation became a dramatic reenactment of Hindu mythology is never fully explained, but Vance gives us enough clues to work out ourselves how it happened.
Vance wrote Lord of Light? Learn something new everyday XD

The mix of poetic, mythic and epic with a fresh, modern often irreverent tone is one of Zelazny's stone mark. It just works. He's also an awesome storytellers in a way only Neil Gaiman or, yes, Vance, equals.
In Lord of Light there are those images that you can't forget, the assassin that was the true buddha, playing dice games with Rakshasa, the chariots of the god, Yama the God of Death who was old before he was young, and the little girl who was once Kali... Very powerful images.

I miss the days of writers like Zelazny who didn't care if a work was fantasy or SF as long as it made a cool story.

I wish it wasn't dated. But it is. Mostly by its sexism. (I always wince when Sam guesses who the new Brahma is by his ubermasculanity, with the unvoiced assomption that of course a woman would want to be a man, and an ubermasculine one at that, and still fall short, yikes)

I always find the scene near the very end with Yama, the little girl who was Kali, and Kubera incredibly moving and it's one of my very favorite written passages period.

Sigh. And I didn't notice the mistake until after I'd reposted it to 5 different forums. Arse. All fixed now though :-)

That reminds me that I owe someone a review of Lyonesse. Promised it to them about a year ago and should really get on with it. I read it for the third time right before I started the blog as well, so it's reasonably still fresh in the mind.