Released in 2004, Jonathan Strange and Mr. Norrell was a huge success for its author, who had spent ten years writing the novel. It sat on the bestseller lists for quite some time, was hugely promoted (for over a year I couldn't go into either of my local Waterstones without seeing the book everywhere) and won both the 2005 Hugo Award and World Fantasy Awardfor Best Novel. Unusually for a self-proclaimed fantasy novel, it was also longlisted for the 2005 Booker Prize (which normally prefers authors who refuse to admit their novels are SF or fantasy, such as Margaret Atwood). Time Magazine also named it the best novel of 2004. 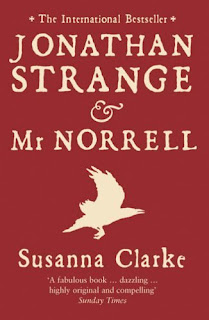 The book opens in the early 19th Century. Britain used to be a centre of magical prowess and for three hundred years a powerful magician ruled a magical kingdom in the north (based around Newcastle) before disappearing, but in recent centuries magic has faded out of view and become purely a theoretical science. A theoretical magician, John Segundus, discovers a 'real' magician named Mr. Gilbert Norrell and reluctantly convinces him to make his magical prowess known to the public at large. At first resistant to the idea, Norrell soon changes his mind and finds himself the toast of London society and is greatly valued by the King and Parliament for the magical aid he gives in the war against Napoleon. However, Norrell's profile is soon upstaged by the emergence of a new magician, the young and handsome Jonathan Strange. Norrell sees Strange as headstrong and dangerous, whilst Strange thinks Norrell is controlling and old-fashioned. As their feud escalates across the years, a lord of faerie, known only as the 'gentleman with thistledown hair', returns to Earth and sets in motion a number of villainous plans that ensnares a beautiful young woman and a black servant of kingly countenance.

Jonathan Strange and Mr. Norrell is a terrific and major accomplishment in fantasy writing: the recreation of a 19th Century novel as if it was written by Dickens or Austen with magic merely part of the backdrop. It is a rich book dripping in atmosphere and, at times, humour that is reminiscent of Jack Vance but fits in with the time period. The core of the plot - the rivalry between the two magicians - is simple, but the details that embellish it make it far more complex and involving. The book is accompanied by intriguing and amusing footnotes and some excellent Victorian-esque illustrations by Portia Rosenberg.

Indeed, for much of its considerable length the book looks like it's going to walk off with top marks. Unfortunately, it hits a snag about two-thirds of the way into the volume that threatens to unbalance the whole enterprise. Having already channelled Dickens and Austen with the merest dash of Tolstoy in the short battle sequences, Clarke seems to have decided that what the book really needed was some kind of extended European adventure in which our main characters are put through hell and back, suffering illnesses and bouts of insanity, almost as if she wanted to put Strange through a Byron or Keats-esque nightmarish wringer for the sheer hell of it. And it seems to go on forever. If I hadn't been on holiday at the time with this as the only book to hand, I question whether I could have gotten through it. The book does recover somewhat towards the end, with an intriguing reapproachment between Strange and Norrell that unfolds in a totally unexpected way with a somewhat appropriate ending, but the unexpected, extended interlude of misery into a story enlivened by its earlier, lighter moments is a jarring tonal shift that makes it difficult to recommend the book unreservedly.

Jonathan Strange and Mr. Norell (***½) is a book that very nearly achieves greatness through is rich character-building, its lavish descriptions and lively humour, but is let down by an unnecessarily long and drawn out latter third. If you can bear with it, the novel does ultimately end with a fitting conclusion, but it's possible you may lose interest before that point.

The novel is published by Bloomsbury in the United Kingdom and by Tor in the USA. A short story collection expanding on characters from the novel, The Ladies of Grace Adieu and Other Stories, was released in 2006. Clarke is currently working on a sequel to the novel.
Posted by Adam Whitehead at 22:36

Good review. This pretty much mirrors my own opinion. I enjoyed the book, but somewhere in the latter half I found myself doing a lot of page flipping.

Funny. I had a hard time getting through the first 100 pages, but when I passed that, found the pacing perfect up until the ending :)

Otherwise, I really loved the book originality. The depiction of magic and faery, the humour!

I'm with etrangere on this. I found the first third of the book incredibly slow and opaque and nearly gave up on it before it drew me in... I did enjoy it though, and would be interested in reading a sequel...