Control is the 'biopic' of Ian Curtis, the lead singer with the late 1970s rock/post-punk band Joy Division. Between 1977 and 1980 Joy Division were a number of bands who helped establish Manchester as a centre of musical excellence in the UK. They released two absolutely seminal albums - Unknown Pleasures and Closer - and a slew of hit singles and EPs, culminating in 'Love Will Tear Us Apart', which catapaulted them into the charts and set the scene for their first tour of the United States. But, on the eve of that tour in May 1980, Curtis committed suicide at the age of 23. A year later his bandmates reconvened, renamed themselves NewOrder, and went on to become one of the most successful bands of the 1980s. Control is Curtis' story. 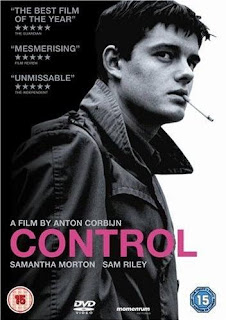 Control is the first full-length film to be directed by Anton Corbijn. This is somewhat surprising, as Corbijn has been directing music videos for a quarter of a century, working with bands such as Depeche Mode, U2, Nice Cave, Bryan Adams, Red Hot Chili Peppers, Mercury Rev and Coldplay, not to mention directing the 1988 re-release of the Joy Division song 'Atmosphere'. He is also a highly acclaimed photographer, responsible for the sleeve design and photography for, among others,U2's The Joshua Tree.

For this film, Corbijn chose to use his trademark black-and-white imagery. It may be a cliche - this is a dark and somewhat depressing film - but it works well, especially when compared to Michael Winterbottom's 24 Hour Party People which covers same of the same story in blazing technicolour. Still, I couldn't help wondering if perhaps Corbijn should have moved outside of his comfort zone and perhaps bled colour and black-and-white together as the film moves from the happy optimism of youth into darker and more suffocating territory.

The film opens in 1973 with Curtis still at school, showing him as a massive fan of David Bowie and falling in love with his first girlfriend, Deborah, whom he marries shortly after leaving school before getting a job working for the local unemployment office. He dreams of being a writer and a rock star, and hears about a local band called Warsaw founded by guitarist Bernard Sumner and bassist Peter 'Hooky' Hook, but they're lacking a singer. After catching a performance by the Sex Pistols, Curtis decides to join up, providing lyrics and taking over the microphone. A blazing trail of success follows: they change their name to the more successful Joy Division (the name of a brothel made up of Jewish women used by the SS in WWII, which immediately earns them the ire of some groups who accuse them of being Nazi sympathisers), get some performance slots on TV and record a successful debut album, Unknown Pleasures. Ian and Deborah also have a baby daughter. But, coming back from the band's first gig in London, Curtis is struck down by epilepsy. Unable to take the pressure of being in the band and in his job at the same time as suffering from his illness, he resigns from his job and Deborah has to bring in a living wage. During a foreign tour Ian meets and falls in love with a Belgian fanzine-writer, Annik, which complicates things even further.

A film like this lives and dies based on its performances and they are universally excellent. Newcomer Sam Riley gives a stunning performance of the haunted, intense Curtis. The only major criticism I have is that Curtis' sense of humour doesn't come through in his performance, but that may be more the fault of the writer. 24 Hour Party People and Deborah Curtis' book, Touching from a Distance, both make it clear that Curtis wasn't constantly down and depressed, but from this movie you don't get that impression. Deborah Curtis is played by the much more well-known Samantha Morton, who gives a sympathetic performance as the wife who is left behind when her husband finds fame (but not fortune) as a rock star. Another stand-out is German actress Alexandra Maria Lara (who was excellent in the 2004 movie Downfall), who plays Annik. Also of note is Toby Kebbell, who plays the band's infamously acid-tongued manager Rob Gretton, who provides much of the film's humour.

Control is a haunting movie consisting of stunning performances and a soundtrack to die for (the actors, impressively, actually play and sing all the Joy Division songs themselves). It makes for uncomfortable viewing at times, but is an engrossing piece of work.

Control (****½) is available on DVD in the UK at the moment. The US edition will be released this week.
Posted by Adam Whitehead at 17:09