Hang on, aren't there ten episodes in the first half of BSG Season 4, you may be asking? Correct, there are. But episode ten is pretty monumental - actually the biggest episode of the series to date - so much so that I'll be discussing it by itself (a first on the blog for a standard 45-minute episode of television) later on in the week, after it airs in the UK and Ireland on Tuesday. 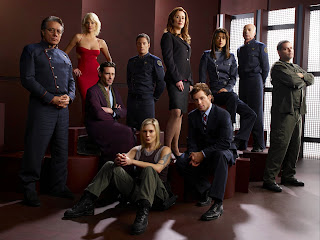 Anyway, the first five episodes left off with Starbuck facing a mutiny against her command on the Demetrius after she decided to trust the Cylon Leoben and have him take them to his basestar. Faith opens with a stand-off as Helo, Starbuck's XO and best friend, joins the mutiny. However, Anders steps up and supports Starbuck, but takes a step too far by shooting Gaeta in the leg. As the crew rally to save their comrade, Starbuck realises her actions have been irrational and decides to take a skeleton crew of volunteers (consisting of Athena, Anders and Barolay, a former member of both Anders' and the New Caprica reistance movements) on a single Raptor to investigate. As Starbuck tries to forge a peace with the stricken basestar, Laura Roslin faces her own mortality with the help of another cancer patient, Emily Kowalski.

Faith is an effective episode that begins to batter down the lines drawn in the sand between the Cylons and humans. Whilst misunderstandings continue (two Cylons and a human die before the two sides seem to be able to start trusting one another), the episode effectively builds to the point where you can believe that some sort of mutual accomodation may be possible, even if Starbuck's sudden acceptance of Leoben as some kind of guide to her visions after what he did to her on New Caprica is a bit much to swallow. Katee Sackhoff does sterling work this episode, especially her reaction to what the Cylon Hybrid tells her about her future and that the Final Five know the way to Earth (which also gives the show a much-needed sense of direction for the first time since New Caprica). There are also effective moments depicting Anders' reaction to being on a Cylon baseship for the first time, such as him comforting the dying Eight and wondering what would happen if he stuck his hand in a Cylon control node. However, the acting meat of the episode is back on Galactica as producer Ronald D. Moore calls in one of his Deep Space Nine cohorts, Nana Visitor, to depict the dying Emily. Whilst it's an expected storyline - the first step in softening the hardass that Roslin has become and making her question her own views of religion and what Baltar and his cult are preaching to the fleet - both Visitor and McDonnell pull it off.

Guess What's Coming to Dinner? opens with the now-compliant Cylon basestar jumping right into the middle of the fleet, triggering a major crisis. Luckily, a tardy Demetrius shows up just in time to stop the Galactica fragging the basestar. We then have some nice revelatory moments where the Cylon rebel leader, Natalie, explains that Cylon resurrection technology is based around a single, huge mobile space station, the Hub. If the Hub is destroyed then the Resurrection Ships stop working and Cylon resurrection becomes impossible. She is offering the Colonials the opportunity for a joint mission to rescue D'Anna Biers, retrieve the identities of the Final Five from her, destroy the Hub and then proceed to Earth as partners. Obviously the Colonials are skeptical but the temptation of destroying the Hub and ending the Cylons' biggest advantage over the humans is too much for Roslin and Adama to ignore.

This is a solid episode, although it seems rather convenient that the Resurrection Hub, which was never mentioned until a few episodes ago, is such a massive Achilles' heel for the Cylons. Presumably the Hub took so long and so many resources to build it cannot easily be duplicated or replaced, but it still seems awfully convenient that such a weakness exists. Ignoring that plot convenience, there is much of interest in this episode with the Cylons and Colonials having to plan a joint attack mission and the Cylons debating about whether to betray the Colonials or not. Athena's reaction to what happens to Hera at the end of the episode is a little hard to swallow, however, considering that Natalie isn't even the same Six who picks Hera up in her vision of the Opera House on Kobol, and that there is no evidence that either the Six or Baltar in that vision actually wants to harm her. As a result the episode feels a little under-developed, and the methods used to ensure that Baltar and Roslin are on the basestar at the end of the episode are somewhat contrived. Nevertheless, a solid instalment that advances the plot. The CGI for the showdown between Galactica and the basestar is also, as ever, spectacular.

At this point the narrative splits in half. Sine Qua Non follows events on Galactica and in the fleet whilst The Hub switches to events on the basestar. Sine Qua Non is, frankly, the most bizarre episode of BSG in its history. The events that happen in the episode are not surprising, but the speed with which they occur and the reasoning behind it is. First off, we learn that Lee has apparently been in regular contact with Romo Lamkin (a welcome reappearance by Mark Shepherd) since the Season 3 finale but there has been no evidence for this. Secondly, the decision to replace Roslin as president seems premature. This episode makes it ambiguous how long she's been gone for, but the next reveals that both episodes cover a period of some two days only. As a result the political events in the fleet that lead to Lee becoming President seem ludicrous. If Roslin had gone missing for a week, perhaps this would be conceivable, but as it stands it's possibly the single most contrived plot development in the history of the series. Lee being President is logical, even predictable given his character development since the mini-series, but it happening so fast is not believable. Then we have Romo losing it, having cat hallucinations and threatening Lee at gunpoint, which is all extremely silly.

Elsewhere, Adama becomes consumed by the need to search for Roslin and endangers the fleet's security to do so. Sound familiar? It's a re-run of the Season 1 episode You Can't Go Home Again, where Starbuck crashed on a desolate moon and Lee and Adama endangered the fleet by staying to look for her long after any hope for her survival had passed. The parallel between the two events is even drawn in this episode by Adama admitting to losing his focus far more readily. The problem is that the situations are totally different: Starbuck was just one pilot, whilst Roslin is the President of the Twelve Colonies. Also, 50% of Galactica's Viper wing and pilots are also missing. Once they confirm that the Hub has been destroyed as well, it's also possible that the missing baseship also contains D'Anna and the information that will lead to the discovery of Earth. Employing all means to search for the ship makes perfect sense, and the sequence of events that leads to Adama stepping down in favour of Tigh - whom he has just berated for getting the captive Six pregnant! - and staying behind in a Raptor on the off-chance the basestar shows up again is utterly implausible. That said, seeing Adama get into a flight suit again and take on his callsign of 'Husker' is quite cool. But overall Sine Qua Non is a badly-conceived episode that takes us back to the dark days of mid-to-late Season 3 when things were happening that didn't make any kind of sense.

The Hub switches over to the basestar and thankfully things are much more interesting here. The Hybrid is unhappy with Natalie's death and decides to attack the Hub by herself ("We don't need no stinking battlestar!", or something). Whilst Baltar and Roslin try (and fail) to get some sense out of the Hybrid - who is in danger of just becoming a convenient plot device at this point - the Cylon and Colonial pilots have to learn to get along, which isn't as easy as it seems. There also very amusing subplots where Helo meets an Eight who has downloaded his wife's memories and knows some very intimate things about him, which freaks him out a bit, and Baltar tries to find out if the robotic Centurions believe in the Cylon god. However, the latter part of the episode belongs first to Mary McDonnell as she finds out about Baltar's involvement in the destruction of the Colonies and debates leaving him to die when he is wounded in the battle, and then Lucy Lawless as D'Anna returns from the dead, kills Cavil and then confounds Roslin's desire to know about the Final Five. There are some more nice CGI sequences in the battle, ending with the double-nuking of the Hub in slow motion, which is almost beautiful to watch, with Bear McCreary's score doing some excellent work over the top.

The episode ends with Roslin finally admitting her feelings to Adama, and Adama giving the best comeback to that phrase since Han Solo in The Empire Strikes Back.

These four episodes provide plenty of build-up to what is BSG's biggest, and possibly best, cliffhanger episode to date. Check back for a review of that later in the week.

Forthcoming: Episode 410, Revelations, aired in the USA last Friday and will be shown in the UK on Sky One on Tuesday evening.
Posted by Adam Whitehead at 00:12

Overall same as my own thoughts :)


I'll from now on only refer to Adama as Emodama for saying a phrase like "I can't live without her" in all seriousness. :)

True, but he gets points back for his reply to her declaration of love: "About time." I refuse to believe the writers weren't thinking of Leia/Han Solo when they wrote that.

which is probably why I thought it was just as ridiculous and overdone :p anyway I was wincing so hard at all the shippiness of the episode that I wouldn't have noticed even if it was awesome.

Adama does get more emo in episode 410 (although more on that in a couple of days ;-) ) but it kind of makes sense. The Adama/Roslin stuff I could take because it came after Baltar chatting up the Centurion and lots of huge nuclear explosions :-D