The Fall of Hyperion by Dan Simmons

The Fall of Hyperion is the second novel in the four-volume Hyperion Cantos, although it does effectively resolve the storylines opened up in Hyperion. When the first book ended, the pilgrims had arrived at the Valley of the Time Tombs on Hyperion where each was supposed to confront the Shrike and petition it for a wish. However, one of their number, Het Masteen, had vanished without a trace. At the same time, the 'barbarian' Ousters are launching a massive assault on the Hyperion system which the Hegemony of Man's space fleet, FORCE, has proven unable to repulse. All eyes in the Hegemony turn to the Hyperion system where the fates of billions will be decided. 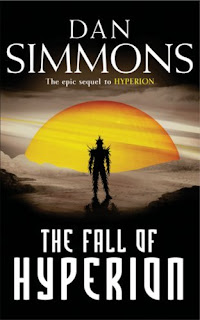 The novel proceeds along two parallel paths. In the first, we see events unfolding on Hyperion as the surviving pilgrims explore the Time Tombs. In the second, we follow Hegemony CEO Gladstone as she plans the defence of the Hegemony of Man against both the Ousters and the AI TechnoCore, humanity's extremely unreliable ally. Both storylines are related through a second 'cybrid' based on the poet Keats, who is telepathically linked to Brawne Lamia, one of the pilgrims on Hyperion, and has also been called into the advise the CEO.

Fall of Hyperion is therefore a somewhat different book to the first. Much bigger and more explosive events are depicted than in the first book. This is definitely a less character-intense book, although it could be argued that the original Hyperion did such a good job of defining the characters we don't really need to delve further into their skulls. Fall of Hyperion is, however, more action-packed and much faster paced, developing into a real page-turner as the book proceeds. In particular, Gladstone becomes a fascinating character, her decisions at the end of the book likely to doom her to infamy for all time, despite the necessity of her actions.

There are a few more problems than there were with Hyperion. The Keats angle in the first novel was interesting and allowed Simmons to explore his obvious love of the poet quite thoroughly. However, having a second Keats avatar pretty much relate the entire story of the second novel is a massive overkill. If you have no interest in the poet, there are long stretches of this second novel that are just extremely tedious. Also, after the massive build-up to galactic apocalypse with the promise of billions dying and humanity falling into a huge dark age, the ramifications of 'the fall' are seriously downplayed. Perhaps the next book in the series, Endymion, which picks the narrative up some 200 years later, will do a better job of expanding on this, but it feels like Simmons pulled his punches at the end of the book.

That said, Fall of Hyperion is an enjoyable, at times gripping science fiction novel and a worthy sequel to Hyperion. Well recommended.

The Fall of Hyperion (****) is available from Gollancz in the UK either in a one-volume edition or in an omnibus with Hyperion. The book is available from Bantam Spectra in the USA.
Posted by Adam Whitehead at 18:52

where Endymion concerned Simmons doesn't expand on anything important really - it's a pretty straightforward space opera; which is a shame, if compared to Hyperion and The Fall of Hyperion. Great review Wert.

There is a new website for news and info about Hyperion and the books and movie: Hyperion Cantos