The Grand History of the Realms by Brian R. James & Ed Greenwood

The history of the Forgotten Realms fantasy world is long and complex. Since the Realms first appeared in print in 1987, with the novel Darkwalker on Moonshae and the original first edition of the Forgotten Realms boxed setting, over 210 novels and dozens of game products have been published, each adding to the canon and history of the world. This doesn't include the extensive history and backstory built up by creator Ed Greenwood whilst he ran the Realms as his own private creation for the twenty years prior to that. Needless to say, the story and history of the Realms have become somewhat convoluted in the forty years they have existed. 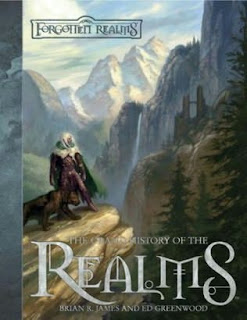 According to the blurb, The Grand History of the Realms is supposed to detail the complete history of the Realms as explained in the novels, computer games and RPG ame products previously published. That claim has to be taken with a grain of salt the size of Lake Michigan. It's a suspiciously slim tome for such a grand endeavour, and indeed the events of many novels, sourcebooks, computer games and adventure modules go completely unmentioned in the book, making its worth somewhat dubious. More irritatingly, the book also fails to mention the sources for its dates and events. What is new material and what is old? What comes from existing game products and what comes from the novels? Combined with the lack of an index, this even further lessens the value of the book. Reading up on the Tuigan Invasion is cool, but if you want to delve further into the events, what novels do you read? What game products do you look up? The book doesn't give you any help on that score.

Of course, what makes this all the more irritating is that the original, free version of the book (assembled by Brian R. James when he was just a fan providing a resource to candlekeep.com) does annotate all of its dates with the source in question. And, seperately, other sourcebooks and Dragon magazine articles have provided dates for all of the novels. Combining these sources into the book and providing a more substantial tome would have been more useful.

Unfortunately, the book's biggest hindrance is that it is simply a timeline, not a narrative history, so if you want to read up on the history of Elminster, for example, you have to trawl through the entire book and pick up his story as you go (this is made all the more difficult as, ridiculously, Elminster's birth date is not mentioned either). A narrative history would put together Elminster's history in one chapter and set it in context among the greater history of the world. This book singularly fails to do that. There is also the issue that where certain dating contorversies have emerged, rather than come to some conclusion about each one, the writers have sometimes put in both conflicting dates. As a result some notable historical figures die in a civil war, only to die again in exactly the same civil war fourteen years later. Right.

The next problem is that the transition of the Dungeons and Dragons game from 3rd to 4th Edition, including the adoption of a completely new system of magic, means that the Realms have also got to change and rather than simply retcon the transition (as they did between 2nd and 3rd Edition) the game designers have decided to nuke the Realms by killing the Goddess of Magic (along with about fifty other deities), disrupting the magic system for the planet, nuking an entire continent for no logical reason and devastating several of the others (including Faerun, the main Realms continent). Oh yeah, and they've also advanced the timeline by 104 years (meaning that about half the characters and NPCs in the Realms that fans are familiar with are suddenly dead of old age). Needless to say, many Realms fans aren't happy about this. You can probably hear the screaming over the Internet from here.

Finally, on the criticism front, the book uses a ton of recycled art, sometimes with wrong or incorrect captions, and some of it is from completely different settings with no relevance to the Realms (the unexplained presence of a warforged - a sort of killer robotic golem - from Eberron being a clear example).

The book does have some saving graces, however. A few loose ends left dangling from 2nd Edition in areas that were not addressed in 3rd (such as the outcome of the Sythillisian War between an empire of ogres and the human merchant kingdom of Amn) are finally resolved, and the timeline advances the current history of the Realms forward by about ten years (before the centry-long leap into 4th Edition), making it slightly easier for Dungeon Masters running games advancing in real time to keep track of what is going on. There's also some fine new pieces of Realmslore, such as the first-ever maps of the Imaskar Empire and the Kingdom of Jhaamdath, and an interesting map depicting the landmasses of Toril when they were just one huge supercontinent. Also, since the book doesn't introduce any new rules, it can be used happily by those who are playing either 3rd or 4th Edition, or even the die-hards still using older systems. That said, although the writers have gone to some lengths not to make it an obvious gaming product (no D&D logo anywhere on the book, encouraging sales to bookshops as well as gaming hobby stores), its worth for non-gamer fans of the Realms, such as perhaps readers of RA Salvatore's Drizzt Do'Urden novels or Paul S. Kemp's Erevis Cale books, is virtually nil due to the lack of focus on many of the events in the novels.

The Grand History of the Realms (**½) is therefore a failure, albeit an ambitious one, but some Forgotten Realms fans may appreciate it as a one-stop resource for researching some of the dates in the setting's history. The book is simply nowhere near as exhaustive or detailed as it needed and promised to be. The book is available from Wizards of the Coast in the UK and the USA.
Posted by Adam Whitehead at 20:06

Just discovered your site today, so sorry for posting a comment on such an old post, but the Sothilisian Empire actually was addressed in some 3e products -IIRC, Power of Faerun, maybe others. Yeah, I know, nitpicking...