I think in recent years there's been a tendency to take Terry Pratchett for granted. He has consistently churned out, on average, two high-quality novels a year for the better part of a quarter of a century. His Discworld is one of the most fleshed-out secondary worlds in existence. Ankh-Morpork is routinely voted 'greatest fantasy city' ever. Out of 36 Discworld and a dozen non-Discworld novels, there are very few which can be said to be sub-par. There seemed to be this assumption that this was going to carry on for some considerable time to come. With the announcement of his illness last year that seems to have changed, and each new Pratchett novel is likely to garner more coverage and more interest than ever before. 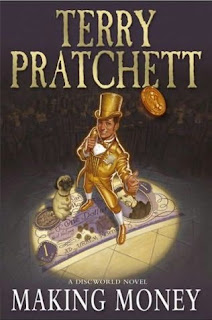 Making Money is the 36th Discworld novel and its paperback release comes in the year that the flat world carried through space on the back of a giant turtle celebrates its 25th anniversary; The Colour of Magic, the first book in the series, was published in 1983. The book is also the sequel to an earlier Discworld novel, Going Postal. In that book, conman Moist von Lipwig was rescued from the gallows by the Patrician of Ankh-Morpork, Lord Vetinari, and set to work restoring the Post Office to its former glory. He succeeded handsomely.

Making Money opens a year later. The Post Office is a roaring success, but Moist is feeling a little bored, and has taken to breaking into his own bedroom to keep his skills fresh. The Patrician seems to have concluded that Moist would make an excellent troubleshooter to sort out Ankh-Morpork's other failing public services and tasks him with getting the Ankh-Morpork Bank back on its feet after the former chairwoman passed away, leaving her dog, Mr. Fusspot, to inherit the role of chairman. Moist is initially reluctant, but soon relishes the new challenge. Unfortunately, a family who own a share in the bank, the Lavishes, are not so keen on Moist's appointment and are soon digging into his dirty past to find something to use against him. Thrown into the mix are lots of golems (including a gender-confused one), an undead necromancer with an eye for the ladies, a very dedicated bank clerk and a lot of clockwork items of an intimate nature.

As usual, the book is an effortless read. Pratchett's prose sparkles and flows as easily as ever, although careful reading is required to catch every observation and piece of satire as it flies past. Pratchett's typical approach of standing back, putting a mirror in front of something we take for granted (banking, in this case) and saying, "Look, this is a really daft system on quite a few levels," is again quite successful here. As with the other later Discworld novels, the broad out-and-out humour takes a back seat to more wry observations, although a comical interlude involving a dog becoming attached to a new 'rubber chew toy' that in this case has fallen out of a cupboard of erotica, and then playing with it in polite company, shows that Pratchett still has time for a good old-fashioned piece of outrageous farce. That said, as with a number of other Pratchett novels the ending is somewhat contrived and the characters get out of the various fixes they're in with some fast-talk, handwaving and a nod from the Patrician, which is a resolution that has perhaps been used a few too many times in this series.

Whilst it's not up there with the series at its best, and the tendency for characters who are intelligent and forthright in their own books to come across a bit as bumbling fools when appearing in cameos outside them (in this case various members of the City Watch) is a bit wearying, Making Money is a solid addition to the series and adds a lot to the evolution of Discworld and Ankh-Morpork (which is now starting to get its own underground rail network, the Undertaking). Somewhat unusually for the series, the ending also sets up a third Moist von Lipwig adventure, Raising Taxes, which is likely to be another two or three Discworld books down the road.

Making Money (****) is available now in the UK from Corgi Books and in hardcover in the USA from Haper Books. The US mass-market paperback is due out on 30 September 2008. Terry Pratchett's new, non-Discworld novel Nation will be released on 11 September 2008. He currently has three more Discworld novels on the go: Unseen Academicals, about the Unseen University's football team; I Shall Wear Midnight, the next Tiffany Aching novel for younger readers; and Raising Taxes, a sequel to Making Money. Expect to see them over the next year or two.
Posted by Adam Whitehead at 15:38