Temeraire is an epic fantasy/alternate history crossbreed novel by Naomi Novik, first published in 2006. Confusingly, it is also the first novel of the Temeraire series, an open-ended series which now encompasses five volumes with several more on the way. In the USA, possibly more sensibly, it is called His Majesty's Dragon. 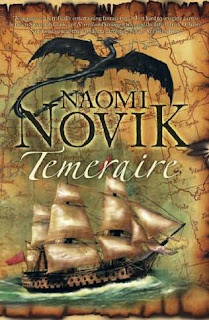 The Napoleonic Wars are raging across Europe, but this is not the history we are familiar with. Dragons exist in this world and most nations have harnessed them to be used as weapons of war. Captain Will Laurence of the Royal Navy wins a great coup for Britain when he captures a French vessel transporting a rare Chinese dragon egg to Napoleon. The egg hatches and the newborn dragon immediately bonds with Will, to his consternation. Once a dragon has chosen its rider, the bond cannot be severed and Will has to give up his career in the navy to train as a dragon-rider.

The rest of the novel follows Will as he learns the basics of serving in Britain's aerial corps and bonds with the young Temeraire, who rapidly grows to maturity, before taking part in a series of engagements with Napoleon's forces culminating in the Battle of Trafalgar and a French aerial assault on the British coast.

Temeraire is a fun read. It's light but enjoyable. Novik paints her characters with a light touch, and after numerous recent dark and gritty fantasies it's something of a relief to read something that is enjoyable and amusing without being drenched in blood every five pages. Conversely, this makes the book something of a popcorn read: a somewhat disposable product. There's some fairly broad characterisation going on there and some of the background doesn't make sense (it's still unclear to me why aviators are considered the scum of the earth compared to soldiers and naval crew), not to mention some fairly wince-inducing, Eddings-esque dialogue between the aviators and their dragons. However, that tends to get forgotten when the muskets start blazing and French and British warships are pounding away at one another with giant lizards battling one another far above, which is all splendidly exciting and well-realised. Given Novik's background in computer programming, it's appropriate to describe the Temeraire concept as an obvious 'killer app', and it's no surprise it was rapidly snapped up for a movie adaption by Peter Jackson (it would be interesting if Smaug in the upcoming Hobbit movie adaption turns out to be a prototype for the dragons in the Temeraire move to follow).

Temeraire (***) may be fluff, but it's fun and easy to read, and I really need to get around to reading the sequels, but as I said with so many other, meatier books around it's easy to forget about this series. The novel is published by Voyager in the UK and by Del Rey in the USA (under the title His Majesty's Dragon). The sequels are Throne of Jade, Black Powder War, Empire of Ivory and Victory of Eagles, with more volumes forthcoming.