Reviewing is something of a solitary habit, so it's good when an opportunity arises to test something with five friends over an extended period of time. In this case, it was the new, fourth iteration of the Dungeons and Dragons pen-and-paper roleplaying game (actually it's the seventh, but we won't dwell on that). I got into playing D&D back in school with 2nd Edition about fourteen years ago and we got used to changing rules systems every few years: we took on board a lot of changes from the '2.5' rules set (the Player's Option/DM's Option books), gratefully changed over to 3rd Edition and incorporated some, but not all, of the 3.5 edition rules as well. Along the way we have played many other RPGs, running from the World of Darkness games through the splendid Deadlands, the old-school Robotech, Cyberpunk, Star Wars (West End rules, obviously) and a number of the D20 games, including Wheel of Time, Judge Dredd and Babylon 5. 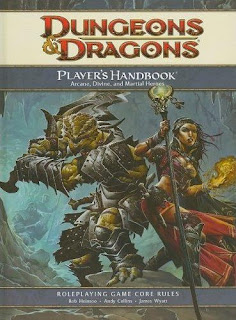 Let there be no mistake, D&D 4th Edition has been the most controversial new edition in the game's history. The flamewars on various Internet sites have been something to behold, with the fans of 4E accused of being simplistic morons who want to turn the game into World of WarCraft and the antis accused of being terrified of change. The change-over from 2nd to 3rd Edition, which was pretty controversial at the time, had absolutely nothing on this. I'm trying to take a balanced view in my approach and sum up what I find to be good and bad with the game.

First off, even the most ardent fans of 3rd Edition had to admit there were substantial flaws with the game. Preperation time for DMs was quite high, characters ascended levels very quickly unless you constantly gave them weak opponents to fight or changed the XP tables, and although the core classes and prestige classes were nicely balanced, some of the prestige classes in the add-on books were broken. In addition, multiclassing, although a vast improvement on the abomination of 2nd Edition, still didn't work as well as it should have done. The changes for 3.5 fixed some of these issues but a lot of the core problems remained.

4th Edition does successfully answer some of these issues. Level advancement is now very slow. After four sessions and killing dozens of enemies between us and achieving several major story and campaign goals, we still hadn't hit 2nd Level. Making a campaign last a decent, long time with 4E isn't an issue, which is good. We didn't get a chance to test multiclassing in the game, but the way it works does seem to be reasonable, giving you some major abilities from another class without totally destroying your levelling rate in your primary class, leaving you underpowered compared to the rest of the party. Preperation time for DMs is also much reduced. In fact, 4E seems to be a lot easier for DMs to prepare campaigns for all-round, thanks to the completely different track that monsters and NPCs work under, and that is a good thing as well. Unfortunately, character generation, which was supposed to be streamlined for this edition, still takes about as long as 3E. Although 3E's confusing morass of skills has been streamlined (a good idea, although some extremely useful skills were lost in the process) and the feats have been toned down, the new class powers have replaced them.

Some sacred cows have been killed along the way, which although admirably bold does lead one to ponder if the resulting game can be called D&D any more. The Vancian magic system is out. Given it was one of the cornerstones of the game, it's a pretty radical change. Some people hated it as being illogical, but the variation on it they brought in for 3E worked pretty well in my opinion, and many iconic spells are now gone. In fact, spells don't exist any more. They're either wizard or cleric powers they can use at will, once per combat or once per day, or they're 'rituals'. It's a very interesting idea that more or less works, but it does feed into the overwhelming 'balance' problem of the game, which I'll come to momentarily. Other big changes including the temporary removal of some core classes and races, but it's okay as they'll be back in another book you can pay more money for, the permanant removal of others (the new system doesn't really allow for sorcerers, for example) and the new way healing is approached. Fed up with the cleric being treated as the party medpack, the creators have changed things so that every character can heal 25% of their hit-points at will, several times a day or once per combat. Clerics and paladins can do a bit more healing than that, but essentially PCs are going to stay on their feet a lot longer than in 3E.

Then there is the 'balance' issue. Balancing is important in a game. No-one wants to have a character who's special skills only come into play once a day and they spend the rest of the time bored whilst everyone else takes care of business. The problem is that D&D was never that sort of game. I've read horror stories of 2E and 3E games where the wizard would simply fire off their one magic missile a day or whatever and take no further part in the game, and the player would end up feeling bored. All I can say is that any DM who ran a game like that should be shot. Keeping your players engaged in the game is vital, and I've lost track of the number of times my 1st Level party was about to be obliterated only for the wizard to save the day with a sleep spell or a fine piece of negotiation aided by a charm spell. Unfortunately, WotC's quest for balance has been too successful with 4th Edition. There is now zero difference between one class and another. A wizard hangs back and pelts the enemy with limitless magic missiles for similar damage that a ranger does with his bow or a warrior does with his sword. Mechanically, everyone is identical, they just approach the problems from different angles. Lots of people really like this, but I find it against the spirit of the game. One character being able to do something the others cannot is the whole point of assembling a party of different adventurers in the first place. That now feels redundant.

4th Edition is a good game. In fact, I look forward to the inevitable martial arts expansion for the game, as it could be the most successful depiction of martial arts in an RPG to date. The rules really lend themselves well to it. However, it's not really in the spirit of how our group plays D&D. We veer towards realism (including realistic use of shields, borrowed from the excellent Game of Thrones RPG, and the correct, damage-reducing application of armour) and 4th Edition veers towards cinematic exuberence. The DM said he enjoyed the fact that the game lent itself well to a Crouching Tiger, Hidden Dragon style of flamboyence. That's great, but our group doesn't particularly like to do that (maybe a result of several people in the group with a solid grasp of medieval history and weapons) in D&D. For us, 4th Edition felt like either a solid optional ruleset like the old 2nd Edition Player's Option books, or a completely different game. It is also inherently a high-magic game (even non-magical classes have magical or supernatural abilities) that will clash badly with people running a low-magic setting. Plus you cannot transfer characters from 3E to 4E. If you want to start a new campaign which is very heavy on combat in a high-magic setting and uses miniatures, then 4E is for you. If you don't, than the new system will likely be of no use whatsoever.

It's annoying because there is a lot of good stuff in 4E, but overall it doesn't feel like the next logical step forward in the rules, as the progression was from 1E to 3.5E. There's definitely some interesting ideas in there, but overall nothing that really warrants our group to permanantly switch from 3.5E. Obviously, each D&D group plays the game slightly differently, and 4E will no doubt appeal to other groups more than 3E and beginners will probably find it a lot of fun, but it didn't quite do the job for us. Fortunately, with several of the 3E designers now working on the Pathfinder D20 game, those hankering for new rules and material for 3E can still get it, so no longer is it a choice of "stick with old books for a dead system or get with the new rules," which is all to the good.

Some notes on the book itself: the font is quite large and the borders are huge, leading to a lot of wasted space compared to the busy 3E books or the crisp and efficient 2.5E ones. The art direction feels rather conservative compared to 3E, but the illustrations are good. The layout is horrendous, however, and the index is laughably bad. I was quite shocked at how difficult it was to find information in a hurry, as this is something previous editions of the game going back to the 2.5E revised rulebooks in 1995 had fully delivered. I also had a chance to look at the Monstrous Manual and was really surprised at how bad it was: stat-blocks, a picture and maybe a single paragraph of text and that was it, easily the worst iteration of the book to date (including that loose-leaf foldered 2E thing).

I'm not going to give a score to 4E D&D because it's a very subjective game. The things I outlined as being weaknesses for our group may very well be huge strengths for yours. I can only say that I was disappointed that the game didn't offer more to our group, but it is impossible for one game to appeal to everyone. The Dungeon and Dragons 4th Edition Player's Handbook is available now in the UK and USA from Wizards of the Coast.
Posted by Adam Whitehead at 16:37

Email ThisBlogThis!Share to TwitterShare to FacebookShare to Pinterest
Labels: dungeons and dragons, rpg

It is fun reading your reviews. Thanks.

This is an excellent, well-balanced review. I'm of the "anti" camp, having been away from the game for several years, and coming back into it for 3.5e - spent hundreds of dollars on books and supplements, and then facecd with yet another edition. I got fed up, and decided to stick with 3.5, which I find quite useful for my purposes. Based on your review and others that I have read, I think I'll stay away from 4.0 entirely - it just doesn't seem to have the original flavor of the game for me.

Thanks for the Heads-Up, I'll be staying far away from 4E. Me and my group still run on 2.5E, as even 3E has been oversimplified and alot of the spirit of the game was extinguished as WotC continued the dumbing-down and PCing of the game, more so than the sad step of removing the Assassin from 1st to 2nd Edition.

It's nice to see that DnD is becoming approachable - that people who are not interested in spending hours or hundreds of dollars on a tabletop game can still have the DnD experience and tell the DnD stories. This review is exactly what I needed to hear to come back to DnD with 4th Edition. Thanks.

I am very interested in knowing more about those house rules for shields and armour. Have you published these somewhere?