Seagalogy: A Study of the Ass-Kicking Films of Steven Seagal by Vern

Vern is the guy who used to write reviews of action movies for Ain't It Cool News, mostly low-budget, direct-to-video/DVD stuff that most people wouldn't touch with a bargepole. Whilst writing these reviews he'd engender a lot of debate, arguments and flamewars with one exception: the movies of Steven Seagal. It turned out that there are many fans of the Seagal out there, people who watch his movies religiously, drink cans of Steven Seagal's Lightning Bolt (his own energy drink) and listen to his two albums of blues music whilst analysing the themes and motifs of his work. And some of them weren't being all cool and ironic. Fascinated, Vern set out on a mission to watch and review all of Seagal's movies. This proved difficult, as Seagal was entering his most prolific period to date, churning out ten movies during the book's production. However, with his next couple of pictures delayed, Vern was finally able to catch up and write a book about his experiences. This book. 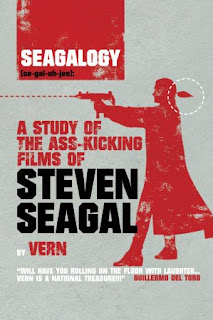 The first thing that hits you about Seagalogy is that the title is grammatically dubious. However, it turns out that there is a website called Seagalology which just takes the mickey out of Seagal on a boring surface level, and Vern wanted to avoid any association with them, so that's fair enough. The second is that this is a very good book. It's genuinely funny, interesting and, in its own way, incredibly barmy. Vern isn't writing serious film criticism here but he's also not taking the piss either. He obviously respects Seagal (and given how many people he's thrown through windows over the years this is probably a good thing) and is genuinely interested in what makes his films tick.

An early discovery is that Seagal is a left-wing action star, which immediately puts him in a different boat to Schwarznegger, Stallone etc. His films usually don't portray America in the best light, and the most common theme between them is how corrupt the CIA can be and how the US' own developments in areas like chemical and nuclear weapons are not really helping make the world a safer place. In fact, by analysing the motifs that repeat themselves in every single movie, Vern draws some interesting conclusions. You might say that one film about a lone wolf agent trying to redeem himself from a corrupt CIA past by opening a martial arts dojo is a typically cheesy action movie plot, but fifteen involving dodgy government shenanigans is probably an indication that there's some message trying to be gotten over here.

Most of the book is taken up by a film-by-film analysis of his works. There are 27 movies here, ranging from the very-well-known action flick Under Siege to the direct-to-DVD debacle that is Submerged (a movie that would have had Seagal fighting aliens for the first time, but it was changed in post to fighting strange people driven mad by drugs; only 13 minutes of the film is spent on a submarine, submerged). Vern clearly loves the early movies the most, when Seagal is younger, in his prime, does all his own stunts and the plots are pretty straightforward, generally a variation on the "Bad guy killed his partner/girlfriend/wife or kidnapped his dog/daughter/pen-pal and he has to sort it out," set-up. The first movie or two are generic action flicks enlivened by Seagal's slightly unorthodox fighting abilities (he uses aikido, which is not usually featured in martial arts movies as it favours defence over offensive attacks), but very quickly we start seeing some of Seagal's iconic touches coming in as he becomes more powerful and able to exert influence on the movie's direction. He starts wearing some truly rididculous outfits, gets a ponytail, and delivers some message about karma. Vern points to On Deadly Ground as being a vital point in Seagal's movie development, namely the legendary bar fight scene where, having defeated his goons, Seagal suddenly neutralises the bad guy (a lackey of, almost unbelievably, Michael Caine) by playing a weird game with him and then engaging him in a debate about if it is possible to change the essence of a man whilst stirring, epic music plays in the background.

From then on, it's batshit insanity all the way as Seagal stops some villains from blowing up a petrol station with a stick of dynamite by shooting the burning fuse off the dynamite whilst it's tumbling in mid-air (Fire Down Below), saves the USA from a horrific nerve agent by spraying the countryside with flowers from an Apache (The Patriot) and travels across the planet to save his 13-year-old pen-pal after he's sold into white slavery (Out of Reach), even though he hasn't actually been told this and just guesses randomly that something is up. Along the way, he plays cops, ex-CIA agents, ex-Navy SEAL chefs, and a respected expert in Chinese archaeology serving at Yale (but who actually turns out to be the male, retired version of Lara Croft). He fights the mafia, yakuza, corrupt government agents, drug-dealers and bent cops with guns, martial arts, swords, a snooker ball wrapped in a handkerchief and, on one bizarre occasion, a credit card (The Glimmer Man). He throws dozens of people through windows and narrowly avoids enormous explosions on countless occasions. On one occasion (Executive Decision) he even dies, which is rather jarring. As the films become stranger, Vern continues to analyse what makes these movies work or, in the case of the later DTV films, what makes them fall apart.

You also find out more information than you ever needed to know about the formulation of energy drinks and Steven Seagal's musical career. I must admit I found the revelation of his musical background to be pretty cringe-inducing, but a quick trip to YouTube reveals that Seagal is a surprisingly accomplished guitarist, although his vocal range is limited. He even has a few decent reggae, funk and blues songs up there. I mean, Jimmy Cliff doesn't need to start worrying about the competition, but it's light-years beyond most actor-turned-musician projects (Dogstar comes immediately to mind).

Vern's central thesis, that Seagal is an auteur film-maker who imprints all his movies, even the ones not written specifically for him, with his own interests and unique sensibility in a way that Chuck Norris or Jean-Claude Van Damme do not, is hard to refute. This is partially what makes the book a success. The other part is that it is absolutely hilarious. Whenever Vern seems to be getting a bit too serious about his ideological analysis of the politics of the films or something, he'll drop in a casual comment or train of thought that will leave you giggling like a fool (after a lengthy musing on the plot of one film, he returns to the point with, "Meanwhile, Seagal continues to escalate his war on testicles," for example). By the time you reach the end of the book you can't help but agree with Vern that there is something interesting going on with some of these movies beyond a surface reading. And even when there isn't most of the films are unintentionally very funny.

Complaints? Well, if reading a book makes you want to go and watch Attack Force or Submerged, it's probably not an entirely good thing. Also, the later DTV movies tend to blur into one and it's rather hard at times to care enough about some random awful film you're never going to watch to read a ten-page analysis of it, but Vern ususally drops in enough interesting analysis or comedy to make it all worthwhile.

Seagology: A Study of the Ass-Kicking Films of Steven Segal (****) is available now in the UK and USA from Titan Books. Vern is interviewed here about the book, and his own website is here.
Posted by Adam Whitehead at 15:36