A brief note here: the Ultraviolet of which I speak is a mini-series that aired on Channel 4 in the UK and is absolutely no relation to the godawful Mila Jovovich move of the same name, and should not be confused with it. 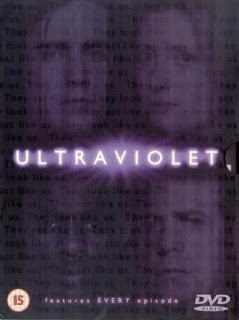 Ultraviolet ran for six episodes at the tail end of 1998 and rapidly picked up enormous critical acclaim. Unfortunately, various factors combined to mean that a planned sequel series never went into production. The series was the brainchild of Joe Ahearne, who wrote and directed all the episodes (the exhaustion brought about by which, and C4's request he do the same for the second season, is apparently the key reason why it never happened). Ahearne had formally worked on the acclaimed BBC-2 series This Life and more recently has directed several episodes of the new Doctor Who.

Ultraviolet is a modern take on the vampire myth. As it was airing at the same time as Buffy the Vampire Slayer, the writer clearly wanted to take a different approach (borrowing a fair bit from The X-Files as well). Ultraviolet is more realistic than Buffy, delving more into science of how vampires might work and showing in some cases greater fidelity to the myth (for example, vampires do not appear on camera as mirrors are part of the camera's focusing mechanism, whilst in Buffy they do) and taking it to new levels: these vampires cannot appear in any form of electronic recording, and cannot use phones either. Also, to avoid certain connotations of the word they never once use the term 'vampire' in the whole series, instead using the phrase 'Code 5' (which is rendered as 'Code V') or the nickname 'leech'. Ultraviolet does have a wry sense of humour, however, especially in the use of carbon bullets and ultraviolet-emitting detection gear (which replicates the effects of sunlight) to replicate more traditional vampire-killing weapons.

The story follows Detective Sergeant Michael Colefield of the London Metropolitan Police Force (played by Jack Davenport, better-known these days for his turn as Captain/Commodore Norrington in the Pirates of the Carribbean trilogy). When his best friend and fellow policeman vanishes without a trace on the eve of his wedding, Colefield discovers his friend was leading a shady double-life that was being investigated by a organisation that the government refuses to acknowledge exists. This organisation is soon, almost reluctantly, forced to recruit Colefield into their ranks once he uncovers evidence of the existence of the 'leeches'. He is integrated into a team led by Father Pearse Harman (the Catholic Church co-funds the war against the leeches alongside national governments; played by Philip Quast), Dr. Angela March (Susannah Harker) and Vaughn Rice (Idris Elba, best-known for his role as Stringer Bell in The Wire), but intriguingly he doesn't fully trust his new team-members and they remain wary of him until quite late in the series. This is mostly because Colefield has a hopeless crush on his friend's jilted fiancee, Kirsty and continues to have contact with her, which the rest of the team suspects is a weakness the leeches will employ against him. However, when it is discovered that Harman has cancer, the leeches also find that they have a temptation they can use against him...

Even though there was supposed to be a sequel, as a mini-series Ultraviolet works extremely well, with events starting at one point and coming full circle as the series proceeds. The notion of science versus faith is explored intelligently in the series: crucifixes and other symbols of faith are treated as placebos and only have an impact on those vampires who themselves are superstitious. The vampires themselves employ technology for their own ends, able to drive around with with use of UV-resistant glass and use vocoders to make phone calls, whilst the longer-lived specimens are able to manipulate the stock market over decades to make immense fortunes. The central theme of the series is also compelling: the vampires and those opposed to them have endured an uneasy truce over the centuries because the vampires want to protect their food supply and enjoy being the elite; they have no wish to turn the whole human race into vampires, for example. The truce is now over because humanity is getting perilously close to the point where it will destroy itself, and the vampires need to save us from ourselves...but whilst this may sound great the suggestion is that their preferred mode of existence for 'normals' is in immense battery farms. At the same time, the world governments are scared of going public for fear of causing a panic and the creation of a state of intolerance, surveillence and fear. As one character says, they walk the line between living on a Bernard Matthews farm or in Iran-writ-large. These themes, even more timely now than when the show was first transmitted, are explored intelligently and in-depth.

This is a great series and no mistake, well-written, excellently acted (Davenport's finest hour by far; Quast is just fantastic as the multi-layered Harman) with moments of moral doubt, character drama and occasional moments of bad-ass action (Vaughn gets two of the most spectacular vampire kills in screen history), whilst the revelation of the vampire's final plan for humanity in the last episode is spine-chilling.

Criticisms? Frankly, no, not really. When the episode aired with the paedophile case I was a bit bemused and pondered if the show was just trying to be 'edgy' for the sake of it. However, it ended with an absolutely monumental and somewhat disturbing twist that was just brilliant and exceedingly logical given the parameters of the show. Of course, the biggest criticism is that we never got a second season, but that may be for the best. The conclusion to the series would seem to make any further continuation of the story a bit too black-and-white, whilst it's the moral ambiguity of the two sides that makes Ultraviolet so interesting.

Ultraviolet (*****) is available on DVD in the UK and the USA and is absolutely 100% recommended as being probably the finest exploration and use of the vampire in modern fiction I have come across.
Posted by Adam Whitehead at 19:26

You just made me order it. Shame on you.

Its a wonderful drama, and you don't have to be into the whole Vampire thing to appreciate it. Its actually about people facingg their biggest fears. Which is one of the principles of good story-telling. Throughout the series, each character has to face what he/she is most afraid of.
Philip Quast is particularly good as Harman. Many people will be unaware that he is a celebrated Musical theatre actor...and recognised as one of the best theatrical baritones of his generation. His 'Javert' in Les Miserables is legendary.
Take that together with other stella performance and guest spots by people of the stature of Corin Redgrave and its clear why this series worked so well. Superb. Thought=provoking...and as such, rare indeed.

A series I have watched more than once over the years; certainly the most adult take on the vampire mythos I have ever come across. And I agree that the non-appearance of the sequel was deeply disappointing.