The Edge of Reason by Melinda Snodgrass

Melinda Snodgrass is another of the excellent coterie of SF&F authors hailing from New Mexico, along with the likes of Daniel Abraham, George RR Martin and Walter Jon Williams. Snodgrass' background credentials are solid: she wrote a number of notable Star Trek: The Next Generation episodes in the first few seasons (most notably the early classic, The Measure of a Man) and was co-editor and a contributor to the Wild Cards series for many years. Although she has written many short stories over the years, The Edge of Reason is her first novel in over fifteen years. 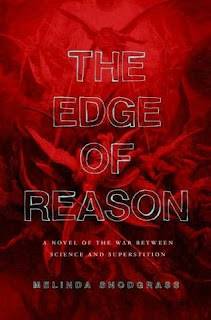 The story opens in Albuquerque, New Mexico. Officer Richard Oort finds two strange creatures attacking a young woman and intervenes. This is the start of a path that leads him to a secretive organisation known as the Lumina. The Lumina represent the forces of progress, science and technology, opposed to the Old Ones, creatures from other universes who have broken into this one and, through the creation and manipulation of magic and religion, feed off the fear and doubts of humankind. This is the ultimate war of science versus faith, made manifest and fighting for very high stakes.

The novel opens in a faltering manner. Whilst the writing is good, the age-old problem of how the protagonist reacts when told reality as he knows it is a lie and magic and demons and other supernatural forces are real rears its head. The reaction of Oort and several other characters when faced with the truth is somewhat underplayed: after a few minutes of the traditional, "But that's impossible!" reaction (although Oort doesn't even get that) they're ready to sign up and fight the 'bad guys'. This is preferable to the Thomas Covenant extreme of going the other way, and once you get past it the book picks up the pace tremendously, weaving Oort's mysterious past and his troubled family life into the narrative with some skill. One point that I thought was a weakness - the character of Rhiana, the young woman who leads Oort into the story in the first place, fades into the background for the middle third of the novel - turns out to be an important plot point as well.

The story twists and turns entertainingly towards the end, although I don't think anyone who's read Neil Gaiman's American Gods or the works of Stephen King are going to be too shocked by the way events unfold. But it's all done in an engrossing manner, the characters are sympathetic and well-defined and the last fifty pages or so roar past at a furious pace. Given that this was marketed as a single novel, the sequel-baiting ending is slightly disappointing, but at the same time I would welcome a return to this setting and characters.

The Edge of Reason (***½) is an enjoyable and at times thought-provoking novel which, after a slightly faltering start, gets going and is fun to read. Recommended.

The book is available in the UK and USA from Tor Books.
Posted by Adam Whitehead at 18:43

Email ThisBlogThis!Share to TwitterShare to FacebookShare to Pinterest
Labels: melinda snodgrass, the edge of reason

Thank you for your informative and enjoyable review.
The book is on my to-read list.
In case you want to have a deeper look please look at:

There you can download first 169 pages of The Edge of Reason.

i love this book the detail Mrs. Snodgrass uses and the action in the book made it a book i could not put down. I cannot wait until the Edge of Ruin come to book stores.