The Hedge Knight first saw light as a 1998 prose short story, published in Robert Silverberg's Legends anthology (but now available in the Dreamsongs collection from Gollancz, specifically the second volume of the paperback editions). This is the graphic novel version, superbly illustrated throughout by Mike S. Miller, whilst Silverberg contributes a foreword and a section on heraldry at the end is provided by Elio Garcia and Linda Antonsson of the Westeros.org website. As a bonus there is also a short excerpt from the sequel, The Sworn Sword, in the second edition of the graphic novel. 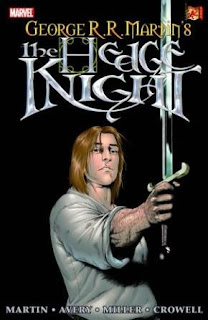 The story opens 89 years before the events of A Game of Thrones. Lord Ashford has called a great tourney and noble warriors and knights from all the Seven Kingdoms have arrived to take part and display their prowess on the field. Among them is Ser Duncan the Tall, a hedge knight seeking his fortune. He finds himself joined by an irritating boy determined to become a squire, Egg, and eventually, reluctantly agrees to take him on. Dunk's plans to make his mark in the lists are dealt a serious blow when he provokes the wrath of Prince Aerion Targaryen, and the story - and the history of Westeros - is wrenched onto a different path.

The story is superb. George RR Martin is an acknowledged master of the SF&F short story and that is evident in The Hedge Knight, which is concise but so tightly and meticulously plotted it's difficult not to just gawp at it in admiration. GRRM employs his usual historical fidelity, showing the tremendous risks that young, poor knights took by fighting in tourneys (a single loss can result in total financial ruin and destitution), whilst colouring it with the pomp and pageantry of the Seven Kingdoms. Miller's artwork is excellent throughout, capturing the characters well and the landscape and heraldry in vivid detail. The detail in the story is also excellent, setting up plot points in the main novels almost undetectably. Ever wonder why the Fossoways are divided into a 'green' and 'red' branch? The answer is provided here. We also see the start of the unlikely chain of events that led to Prince Aerys (not even born at this point) taking the throne as the Mad King and thus kick the entire storyline of the novels into gear. As is often the case with GRRM, re-reading the story, particularly the very start, reveals other things going on under the surface which are very intriguing indeed, and cast the whole story in a very different light.

This is a superb story, one of George RR Martin's finest works of whatever genre and medium, and excellently presented.

The Hedge Knight (*****) is available now in the UK and USA from Marvel (Amazon.com seems to be down at the moment but I'll put in the link as soon as I can). The Sworn Sword is also available now.
Posted by Adam Whitehead at 01:10

Email ThisBlogThis!Share to TwitterShare to FacebookShare to Pinterest
Labels: a song of ice and fire, george r.r. martin, the hedge knight