Season 1 of the new BSG picks up where the mini-series left off: the Twelve Colonies have been destroyed in a surprise nuclear attack launched by their former creations, the Cylons. A ragtag fleet of about 80-90 ships has assembled under the protection and leadership of the last surviving battlestar, the Galactica, and have fled into deep space. Commander Adama and President Roslin have promised to guide the people to the long-lost thirteenth colony, Earth. However, contrary to public belief, they have no idea where it is. As the search for Earth unfolds, the crew of Galactica are also relying on Dr. Gaius Baltar's project to build a device to smoke out the Cylon infiltrators among the fleet. There is a great deal of dramatic tension to be mined by the fact that, as a result of the mini-series, the audience knows who one of the Cylon infiltrators is, but neither the crew nor the character know. 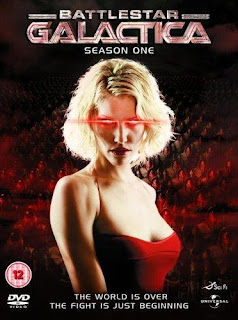 An ongoing subplot takes us back to Caprica, now devastated by nuclear explosions and radioactive fall-out, where Lt. Karl Agathon, callsign 'Helo', is trying to find a way off the planet after being stranded there in the mini-series. However, the Cylons have their own plans for Helo...

Season 1 of Battlestar Galactica is its most concise: 13 episodes compared to Season 2-4's 20 apiece. It's also its most consistent in quality, with no longeurs or unwatchably bad episodes. The pace of events is relentless, with the constant Cylon pursuit of the fleet and their hounding of Helo's attempts to flee from Caprica driving the narrative forwards. The emphasis here is less on the mystical elements that come to dominate the later seasons and more on the cold, hard realities of survival: finding or growing the vast amounts of supplies that 50,000 people need to survive on, finding water and fuel, and putting in place an administrative structure to govern the people more effectively. The clash between the military and political perspectives (espoused by Adama and Roslin) provides an underlying thematic structure to the season culminating in the events of the startling finale. Numerous subplots are established and expanded upon with confidence and verve.

For the individual episodes, the award-winning 33 is an astonishing piece of work. The ticking clock element and the constant Cylon attacks on the fleet turning the crew into strung-out wrecks is handled superbly. Water deals with the supply problem effectively whilst increasing the paranoia quotient. Bastille Day introduces the recurring character of Tom Zarek (excellently portrayed by the original series' Richard Hatch) and a number of political subplots that culminate at the end of Season 2. Act of Contrition and You Can't Go Home Again mix together the problem of recruiting new soldiers and pilots from a very limited pool of recruits with a more dynamic storyline involving Starbuck crashed on an inhospitable planet. Litmus addresses the some of the apparent plot-holes of earlier episodes by having someone investigate the security lapses on board the ship. Six Degrees of Separation puts Baltar on the spot when he is accused of treason, with James Callis delivering a stand-out performance. Flesh and Bone is another excellent piece of work, with Starbuck having to torture a Cylon prisoner for information but ends up having her own soul stripped bare. Tigh Me Up, Tigh Me Down is the first season's only misfire, an attempt at a 'comedy episode' that doesn't work too well, although it does introduce the magnificent, Lady MacBeth-esque character of Ellen Tigh. The Hand of God is a simple balls-to-the-wall action show, with Galactica and her Viper squadrons having to launch a massive assault on a Cylon base. The CGI is astonishingly good and the tactical nuances of the planned attack are portrayed well. Colonial Day is another political episode, showing how the fleet's new administration is going to work. The assassin subplot is muddled and confused, and the resolution to the episode hints at a subplot that is never again addressed. Nevertheless, it's entertaining enough. Events culminate in the two-part Kobol's Last Gleaming, which mixes together the storylines from the entire season and delivers a succession of plot revelations and intriguing ideas culminating in a shocking cliffhanger twist ending that leaves the viewer eager to watch Season 2 immediately.

Battlestar Galactica: Season 1 (*****) is an excellent piece of work, establishing the characters and storylines superbly. It is available on DVD in the UK and packaged with the mini-series in the USA.