Not since the release of The Return of the King in 2003 has a movie adaption attracted the keen attention of so many SF fans, ready to pounce and tear it apart should it fail to meet their standards. The original graphic novel of Watchmen is rightly held as one of the supreme works of genre fiction of the past twenty-five years, the only graphic novel to make it onto Time's list of the most important works of literature of the 20th Century. Heralded as the moment that comics 'grew up', Watchmen is a dizzying tour-de-force of imagery, metaphors, ideas and themes, all bolted onto the subversion of the traditional superhero story. Original writer Alan Moore declared it unfilmable and many directors of note, including Darren Aronofsky, Terry Gilliam and Paul Greengrass, spent months and years of their lives trying to bring it to the screen before agreeing and giving up. 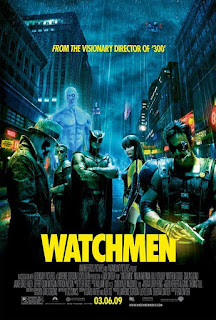 It eventually fell to Zack Snyder to bring the movie to the screen, a choice of director which many fans cheered and others were horrified by, for pretty much the same reason: his previous movie was the extraordinarily divisive 300. And I suspect Watchmen is going to be far more divisive still.

The plot remains unchanged from the novel. It is 1985, but it's an alternative history. Richard Nixon is still President and a bellicose USA is on the brink of nuclear war with the Soviet Union. The USA has a 'real' superhero to defend it, Dr. Manhattan, whose powers, although vast, may not be sufficient to intercept a nuclear barrage from the USSR. In the past, other costumed heroes fought crime but have since been outlawed by the government. The only other exception is a man named Edward Blake, who works for the US government as an agent named 'The Comedian'. When the Comedian is brutally murdered by being hurled from his apartment window, another former 'hero' named Rorschach takes it upon himself to investigate and see if there is a threat to the other retired heroes. His attempts to warn the other heroes soon see events put in motion that will lead to the annihilation of the world, or its salvation.

Watchmen, the movie, closely follows the story and events of the graphic novel. In fact, as with 300, Snyder's problem here is how closely he follows the novel. Movies and novels, graphic or otherwise, have different rhythms and different pacing, and finding a happy middle ground between extreme fidelity to the source text and ending up with something that has little relation to the original is a difficult task. Snyder probably felt like he was erring on the side of caution in trying to appease the comic book fans but in doing so he causes a few narrative problems as well. In a book you can stop the action for 30 pages to deliver a massive character flashback, but in a film it feels a lot more jarring. Snyder pulls it off about as well as it can be done, but I suspect this will be a problem for some people, particularly during the funeral scene which goes on for absolutely ages with multiple flashbacks framed within it.

On the plus side, the film does work. The story is translated faithfully and virtually all of the central characters' arcs are carried over intact. The sole exception is Ozymandias, who gets too little screentime and his backstory - largely delivered in newspaper clippings and text pieces in the graphic novel - is only perfunctorily established. Secondary characters far worse, with Hollis Mason's story cut in half (presumably the rest is on the DVD) and the removal of the Black Freighter story (again to be restored on the DVD) carrying some other characters with it, such as Rorschach's psychologist, the newspaper-vendor and the boy reading the comic. Confusingly, these characters aren't absent and sometimes show up in establishing shots of New York.

One of the greatest challenges the movie faced was making Dr. Manhattan work as a being who has evolved beyond most of the cares of mortals, and Billy Crudup, working under some severe limitations of both character and make-up (having to walk around with CGI marker-dots on his face all day), really sells the character and his alien thought processes. Most of the other actors do good work, with Jeffrey Dean Morgan successfully making the Comedian vile, unrepentant and violent whilst also displaying his charisma. Jackie Earle Haley sells Rorschach 100% with a blisteringly intense performance that is truly remarkable (although in some scenes his gravelly voice suffers a lack of clarity due to a curiously unclear audio mix), whilst Patrick Wilson gives Nite Owl the humanity and heart the part - the closest thing to a 'normal person' the central cast has - really needs. Malin Akerman is okay as Silk Spectre, but her more emotional scenes come across a little flat. Matthew Goode is clearly a talented actor but is possibly slightly miscast as Ozymandias, getting across his intelligence but lacking the sheer presence the character had in the book.

The movie is astonishingly violent, and it more than earns its 18 certificate. Blood drips from the ceiling, bodies explode in gushing geysers of fluid, and lumps of burst human flesh are surprisingly commonplace. It all feels a bit gratuitous, to be honest. The film needs to be uncompromising, as the book is, but that's not the same as needing to be insanely bloody. The book isn't, so why the director felt the film had to be, I don't know.

The special effects are as astonishingly good as you expect these days, and Dr. Manhattan in particular is an impressive achievement. Even better is the music. The original score is excellent and the songs chosen for the movie are appropriate, particularly Bob Dylan's 'The Times They Are A-Changin' running over the title sequence showing the changes to this world's timeline. There are also nice homages to other movies, such as a New York sequence employing Philip Glass' music for Koyaanisqatsi (also recently heard in the Grand Theft Auto IV trailers) whilst a Vietnam scene calls on the requisite Wagner score from Apocalypse Now.

The most important part of the film, and its greatest success, is the total moral ambivalence of the story. Who is right and who is wrong? When the world is about to be destroyed by nuclear war and every living thing slaughtered, what price is too high to ensure the survival of humanity? And who gets to make that decision? The film doesn't shirk away from these questions and doesn't provide pat answers. Despite eliminating two of the most iconic lines from the book at this point and changing the mechanism of the story's resolution (to something that makes more sense, it has to be said), the movie ends on the right, murky note it needs to. And whilst the mechanism of the ending has been changed, rest assured that the iconic final shot of the book is transferred to the screen intact.

Watchmen (****) is not a flawless film or adaption, but it may be as close an adaption to the comic book as we can reasonably expect. It is on general release across most of the world now.
Posted by Adam Whitehead at 23:34

Email ThisBlogThis!Share to TwitterShare to FacebookShare to Pinterest
Labels: watchmen

What are the two iconic lines that were eliminated?

"I did it!" is gone altogether, maybe to stop Ozymandias looking like Hiro Nakamura. Unforgivably, "I did it 35 minutes ago," has been altered to "I set it in motion 35 minutes ago," which is clunky and done solely because the director felt flashing back in time half an hour would confuse the audience.