The Last King of Scotland

1970. Nicholas Garrigan graduates from medical school in Scotland. Unhappy with the idea of joining his father's practice, he instead decides to pick a country at random to go and work in. By chance, the country he picks is Uganda. He arrives whilst the country is rejoicing at the rise to power of the charismatic General Idi Amin Dada. By chance, Garrigan happens to treat the general after he is injured by a bull. Amin, a great fan of the Scottish people, insists on making Garrigan his personal physician. Initially Garrigan enjoys his privileged position and develops a personal friendship with Amin, scorning attempts by British diplomats to recruit him as a spy. However, both internal and international dissatisfaction with Amin's brutal repression of political enemies start to gather steam and Garrigan is caught in the whirlwind as Amin's rule begins to unravel. 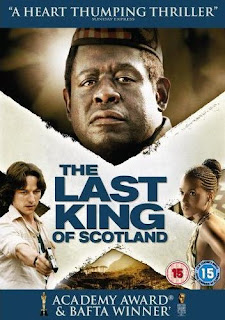 The Last King of Scotland is not a true story, although the brutal nature of Amin's rule of Uganda is pretty accurate. Garrigan is a fictional creation (although he is very loosely based on a British soldier who was far more directly complicit with Amin's regime), ably played by James McAvoy, who convincingly portrays a young, callow doctor who rapidly finds himself out of his depth. However, most of the praise for the film centers on Forest Whitaker's stunning portrayal of Amin. In fact, 'portrayal' is wholly inadequate as a term. Whitaker pretty much becomes Amin for the duration of the movie and rightly won an Oscar, a BAFTA and a Golden Globe for his performance. He nails the contradictory nature of Amin, a man of tremendous charisma who could also snap into a cold-blooded and ruthless murderer in an instant. Gillian Anderson also impresses, although her role is little more than an extended cameo.
The movie overall is mostly impressive, with the optimism and hope of the first half gradually giving way to something much darker and more intense. However, this is accompanied by some problems. The movie takes a turn more for the fantastical towards the ending as Garrigan decides to assassinate Amin, and subsequent events are unconvincing (and extremely gruesome). Also, turning the 1976 Entebbe Airport hostage crisis into a mere backdrop for the finale feels like a bit of a slap in the face to those involved in this very real and dramatic event.

Whitaker's performance is unimpeachable and McAvoy manages to hold his own against him very well, but overall the somewhat muddled ending dilutes the earlier power of the movie. Also, Garrigan - and the viewer - are perhaps too isolated from the horrors of Amin's leadership. The addition of perhaps a secondary plot (maybe using the massively under-used Gillian Anderson character) showing the 'sharp end' of Amin's criminal actions may also have helped to put the sheer evil of this regime into better perspective.

The Last King of Scotland (***½) is an ambitious movie worth seeing for one of the great acting achievements of our time, but it unfortunately comes a bit unstuck towards the end. The film is available now on DVD in the UK and USA.
Posted by Adam Whitehead at 23:59

Email ThisBlogThis!Share to TwitterShare to FacebookShare to Pinterest
Labels: the last king of scotland