Chris Wooding's Retribution Falls: A Tale of the Ketty Jay takes off from your local bookstore in June, but if you want to get a leg-up on the story and characters, the captain of the ship is posting a blog here about events leading up to the start of the novel.

Steven Erikson has - more or less - finished the penultimate Malazan novel, Dust of Dreams. A preview chapter will be included with the paperback of Toll the Hounds but can already be read here. Blogger kcf has also provided an image of the cover: 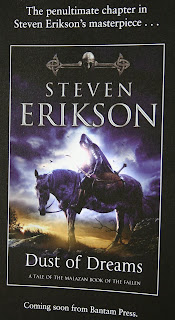 Tor are due to issue a press release in the next week or so about A Memory of Light. Going by Brandon Sanderson's blog entries, I heavily suspect the release will be news that the book is going to be split in two with the first volume published in November 2009, but we'll see. Clarification of the news (whatever it is) should be given at JordanCon in South Carolina on the weekend of 18 April, where Brandon, Tor head honcho Tom Doherty and Robert Jordan's widow and editor Harriet will be in attendance. In the meantime, you can check out this interview with the artist working on The Eye of the World comic book, which will launch in the next couple of months.

Breaking News: A Swedish website is reporting that A Memory of Light is going to be split into three volumes released at 12-month intervals, with the first volume given the title The Gathering Storm. I'm hoping this is the Swedish translation, which would probably require more words thus splitting the books further but since Volume I is due in November 2009 that seems unlikely. If this is true, expect the fanbase to explode in rage over it very soon.

The third Dunk 'n' Egg Song of Ice and Fire prequel novella, The Mystery Knight, will now appear in the anthology Warriors, due in March 2010 from Tor. The third and final (for now) new Wild Cards book, Suicide Kings, will just precede it in December 2009, also from Tor.
Posted by Adam Whitehead at 21:57

Re: Dust of Dreams cover.