Originally released in 2000, Pitch Black is a low-budget SF/horror movie that became something of a hit, and helped propel lead actor Vin Diesel to action superstar status. A sequel (which I will be reviewing presently), The Chronicles of Riddick, followed four years later and a third movie is currently in pre-production. 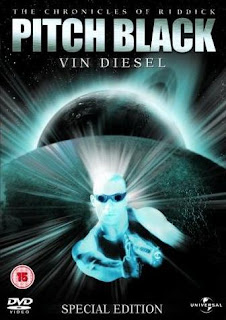 Pitch Black opens with a spacecraft passing through the tail of a comet and suffering serious damage. Thrown off-course, it enters the atmosphere of a habitable moon. The pilot, Carolyn Fry (Radha Mitchell), almost jettisons the passenger compartment to help save the rest of the ship, but her co-pilot manages to stop her (although he dies in the crash). Of the forty passengers and three crew, there are only ten survivors. A major problem is that one of the survivors is bounty-hunter William J. Johns (Cole Hauser) and his prisoner, an exceedingly dangerous man named Richard B. Riddick (Diesel), who introduces himself as "Riddick, escaped convict, murderer." After initially escaping in the aftermath of the crash, Riddick realises he needs the help of the other survivors to escape from the moon and agrees to join forces with them. A great deal of tension in the movie is mined from the unpredictable behaviour of Riddick and the fact that Johns has his own demons and has allowed his obsession with capturing to Riddick to override his humanity. Carolyn also has issues of guilt over nearly killing the other survivors of the crash.

The character study part of the movie is very interesting, although the English survivor Paris (Lewis Fitz-Gerald) is a walking caricature and we don't get to know Australian prospector Shazza very well, despite her being played by well-known genre actress Claudia Black (formerly of Farscape and later StarGate SG-1). The other key characters are Abu al-Walid (Keith David), an Imam on a pilgrimage to New Mecca, and a youngster named Jack (Rhiana Griffith). Al-Walid finds his faith tested as the experience on the planet continues, whilst the impressionable Jack seems to find Riddick 'cool', despite the concerns of Carolyn and Johns.

The focus on the characters is extremely well-done. It's unusual for an action/horror movie to have such well-rounded and believable characters, and the actors all bring their best talents to the job. Diesel is extremely impressive as the anti-hero Riddick, whilst Mitchell makes a rather dislikable character interesting and her gradual move towards redemption believable. As the movie moves into its second half the SF backdrop to the movie becomes clearer: the moon, which is normally permanently exposed to the light of the three suns in the system, is about to pass into the shadow of its gas giant parent planet, at which point a race of vociferous flying creatures who are harmed by light will be released. The horror elements kick in as the characters have to find some way of generating enough light to keep the creatures at bay whilst they make their way across the wasteland to salvation.

These sequences are very tense and handled well. The movie may be low budget, but it makes the most of its resources very well, with the CGI creatures still holding up convincingly a decade later. Even in the middle of these action sequences the director keeps the mutual mistrust and paranoia between the survivors going quite nicely.

Pitch Black (****½) is a genuinely excellent movie, with a well-explored premise and an unusually sophisticated level of characterisation. It also features a highly positive portrayal of Islam, and pretty much all of the actors bring their A-game to the project. The only minor niggles are some stylistic flourishes of the director that are artistically interesting but a bit weird when taken literally (Riddick casually showing up unnoticed in the background of shots as the other characters anxiously search for him at the start of the movie), and the rather one-note writing of the token British character. Otherwise, this is an enjoyable and highly underrated movie.

The sequel is...different.
Posted by Adam Whitehead at 18:57

Adam, you are totally spot on about Pitch Black. It is a quite fantastic piece of sci-fi, peopled with a cast of well drawn characters.

'I always thought I would die in France...'. What a line.

Shame about the sequel. Totally over the top, overblown nonsense. The sequence where Riddick and the rebels escape from the sun through the canyons in a series of slo-mo shots is truly awful.

The Xbox game is good though.

The sequel felt like it was taking part in another universe altogether. I'll try and martial my thoughts on it for a review later tonight or tomorrow.

Escape from Butcher Bay is great though. I felt the sequel to the movie compromised Riddick's ambiguous status by making him into too much of a hero, whilst the game kept up the suspense over what motivates Riddick (admittedly by surrounding him with nasty bad guys, but it still worked) quite well.

Also, you should mention The Chronicles of Riddick: Dark Fury, which is an animation film. Not that bad , either.

Thanks for recommending this film, Adam. I picked it up on the basis of your recommendation and thoroughly enjoyed it. Riddick was chilling and the ending packed a huge punch. Out of the SF films I've watched recently (Star Trek, Wolverine, the X-Men trilogy) this was the best by a country mile. Not that that's hard.