The Chronicles of Riddick

Pitch Black was an excellent low-budget movie with great characters and a tense, dramatic storyline built on an interesting SF premise. The director and the studio obviously thought it was missing a few things, such as big men in eyeliner, vast reams of CGI and a scenery-chewing English bad guy (seriously, what is up with that?), and decided to more than make up for it in the sequel. 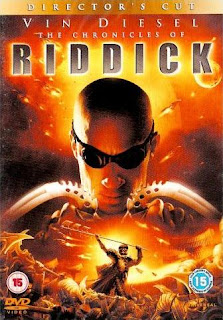 The Chronicles of Riddick is a bit of a mess. A gloriously insane and entertaining-in-its-dementia mess, true, but it's still a movie that feels like what happens when you chuck every single idea you have into a melting pot and randomly shake it around rather than think about things seriously for a few minutes.

The movie opens with the director telling you the editing is a bit rubbish in places, which I must admit was very good of him, especially as I'd never have noticed without him bringing it up. Cheers for that. Then we're on a desolate ice planet with a bunch of mercenaries tracking down antihero Riddick. The mercs are armed with miniguns, nets and a faster-than-light spaceship. Riddick is armed with an unconvincing beard. Obviously my money was on Riddick here. Riddick travels to the planet Helion Prime to find out who's put a bounty on his head and is reunited with the Imam from the first movie. However, the planet is invaded by the 'Necromongers', a bunch of iron plate-wearing American football players who feel like they belong in a totally different film (and that film being David Lynch's Dune). Riddick humiliates the chief Necromonger bad guy (the aforementioned scenery-chewing Colm Feore) and escapes, only to be picked up by the mercs from earlier and taken to the prison planet Crematoria.

But! It's all part of Riddick's cunning plan to break out Jack (the other survivor of the first movie) from the same prison, which is located on a planet where the dayside is so blisteringly hot the air catches fire. This leads to a truly bemusing sequence which reverses the events of Pitch Black as the characters have to stay ahead of the daylight and keep in the shadows (clever writing or lazy recycling of past ideas? You decide). At the same time, a Necromonger attack force under Vaako (Karl Urban) is hot on his tail. Events culminate in a showdown between Riddick and the Necromongers (bet you didn't see that coming, eh?) and a quite unexpected ending.

Chronicles of Riddick is a massive, epic story compared to the first movie, although it shares some of the same driving forces. Laudably, the movie is strong on characterisation and Karl Urban's Vaako (coping manfully with a dodgy haircut and even dodgier make-up) is given some genuine moral dilemmas to chew over as his own ambition clashes with his personal loyalty to his leader, with his wife (played with relish by Thandie Newton) egging him on to do things against his conscience, Lady MacBeth-style. Riddick remains a strong character, although the things he does to save Jack does push him out of the 'ambiguous antihero' role and more towards a straight-up good guy, although he retains enough ambiguity to make the film's ending not as 'happy' as it may first appear. There's also no faulting the impressive set or prop design, which channels Lynch's Dune adaption rather than blander or more antiseptic views of the future.
All of that said, the movie comes across as being fairly ridiculous and over the top, although that could be considered part of its charm. The re-using of familiar elements from the first movie (particularly the inverting of the day/night threat on the planet) is also disappointing. The character of Jack is also not served well, not helped by a change in actress (the hero-worshipping and awkward tomboy of the first movie being replaced by an ass-kicking babe). Judi Dench also has a pretty surreal cameo as an ethereal 'elemental' alien, or something. I wasn't too clear on what was going on there. Oh yeah, and some of Riddick's backstory is explained in the cheesiest manner possible.

The Chronicles of Riddick (***) is an insane movie, but it is also curiously compelling to watch. The action is serviceable and its ambition is admirable, but this is a movie that collapses under the weight of its own ideas. That said, there is still scope for another good movie featuring these characters, and the forthcoming third movie (which will have apparently a smaller budget) should still be quite interesting.