A Name Change for The Sci-Fi Channel

The American Sci-Fi Channel has decided that now is the time to rebrand themselves and give themselves a new name, perhaps to pre-empt the inevitable fact that after this Friday they are going to be referred to as 'the channel that used to have Battlestar Galactica but now just has really rubbish z-movies instead' anyway.

The cable channel contacted branding consultancy Landor Associates and went through 300 names, testing them with a 'techno-savvy' focus group of ages 18-34. The end result? 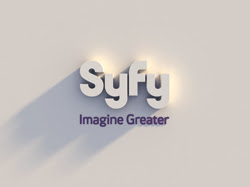 I shit you not.
Seriously? I could have come up with that in about fifteen seconds and stuck it on the reject pile without a moment's hesitation. Dave Howe, the president of the Sci-Fi Channel, expands on this:

“We really do want to own the imagination space,” Mr. Howe said. “We want to get the credit for the range of content that we already have on our air and that we’ll be doing more of in the future. When we tested this new name, the thing that we got back from our 18-to-34 techno-savvy crowd, which is quite a lot of our audience, is actually this is how you’d text it. It made us feel much cooler, much more cutting-edge, much more hip, which was kind of bang-on what we wanted to achieve communication-wise."

The source article also features some particularly clueless comments by 'TV historian' Tim Brooks about how people don't realise they are watching an SF movie when they see something like Star Wars (I think the lasers and spaceships might have given the game away) and how the term 'Sci-Fi' is considered derogatory in SF circles (true enough) but is still regarded as being 'cooler' than 'Science Fiction' (no, it isn't).

All of this goes to show that what the Sci-Fi Channel (sorry, SyFy) probably needs more than a name change is getting a clue and making some programmes that will actually fill the void when BSG finishes. Caprica may do it (although its very different setting and format will likely repel as many old fans as attract new ones), but otherwise the channel's original programming slate is looking pretty empty at the moment.

EDIT: A Polish friend tells me that the new name does not translate well into Polish at all...
Posted by Adam Whitehead at 17:53

SciFi-Channel and www.scifi.com just cannot compare with SyFy and ... will they use SyFy.com instead of the lame scifi.com, too?

That just reeks of coke-addled advertising guys adding up up the results of a bunch of polls and then convincing themselves they've had a good idea before banking an enormous paycheque and rolling off in a limo to down bottles of champagne while eating sushi off some Russian prostitute's thigh.

Sad. Aside from Battlestar you are right, the programming is TERRIBLE and I don't think the powers that be would have a clue what good science fiction was if it bit them in the ass.
Note to SciFi channel programmers: An endless parade of bad monster movies is not considered good science fiction!
Lame new logo. I'm a graphic designer and I could have come up with that in 10 minutes or less. Pathetic attempt at trying to be "hip".

Blimey ... I nearly swallowed my gum!

And, Chris Wooding's comment just about finished me off!

Truly retarded. But I expect no less from anyone employed as an executive at the Sci-Fi channel.

I caught wind of this earlier today thanks to The Swivet, and I've since been pondering the implications of some of the comments by Brooks in the TVWeek article.

The best (worst?) is this gem: "'The name Sci Fi has been associated with geeks and dysfunctional, antisocial boys in their basements with video games, and stuff like that ....'"

(I mean, my video games are played right in the living room, but I digress ....)

Regarding Battlestar Galactica, certainly one consequence of the show has been its ability to cross a number of audience/demographic lines -- noted by several TV critics and commentators, who like pointing to how BSG is more than good SF, it's just good (and relevant) television. Clearly, part of the SCI FI channel's problem is its sense of the current audience for SF, whether that's Star Wars or Star Trek or BSG and so forth.

Another problem is the sample group it went to on this issue. It would be intriguing to know the gender breakdown of the "18-to-34 techno-savvy crowd" used to spur the change to "SyFy." More importantly, though, "SyFy" is "cooler" and "more hip" because, well, because "'this is how you'd text it.'" Texting is the basis for "techno-savvy," then?

Instead of attempting to distance itself from its cultural associations, why doesn't the channel embrace them? I mean, those dysfunctional, antisocial geeks came up with stuff such as BSG and The X-Files, didn't they? Hmm.

I wonder if this will backfire on the channel ....

reminds me of when they re-branded The Post Office as Consignia.

If you have a name everyone recognises just change it to a name that the marketing twats decide is cool and froody (pricetag $1,000,000) that no-one uses and change it back to the original after a year (pricetag $3,000,000)

I'm off down the shops to buy some Opal Fruits and a Marathon.

Reminds me of the £1 million the BBC apparently spent changing their logo in the late 1990s. As far as I can tell it was achieved by highlighting the letters 'BBC' and un-italicising them.

I just read on BrokenToys.com that "Syfy" has a lot of dirty meanings in slavic languages, veneric disease, dirt and so on: http://www.brokentoys.org/2009/03/16/a-brief-comment-contained-within-an-image/#comments

I am sure Landor Associates checked that carefully... not. ;)

It's kind of like the 2012 Olympics logo. Surely no-one's pleased with it except the person who came up with it and the person who signed it off.
Also, anyone who's (re)branding and uses the word 'hip' in the marketing jargon should instantly know that they're not. Being up to speed with 'today's yoof' and the word 'hip' as describing cool are mutually exclusive.

Hah this is too funny. I think it isn't a great idea but it's their own funeral.

Though I do like that Sci-fi had Stargate (new one coming) and airs Doctor Who for us since I don't get a BBC. Of course, Battlestar was their gem.

I have to say that I am not a bit surprised by this. If they are terrible at what they are supposed to do (tv programming) how can you expect them to be good at anything they do?

Besides, how come all good TV series get cancelled after a few seasons while crap like Smallville and Mutant X fills the TV screens? It must have something to do with the audience as well.

And last but not least, BSG was great in its first two seasons. The mystic Lost like part in the last two disappointed me to the point that I don't really feel bad about the show ending.

I agree. First two seasons were awesome because it was 2/3rds military/civilian relationships and politics and 1/3rd badly thought out pseudo-religious psychobabble starring Baltarr. By the middle of season 3 the balance started to tip more and more, and now it's at the point where, after 4 and a half seasons, I'm questioning whether I can be bothered to watch the final few episodes. I so wish they had just stuck with the good stuff...

I gave up on Sci-Fi aka syfy when they cancelled Farscape. Then added wrestling. They might as well change the name - geeks are too good for them, and they do NOT represent good science fiction.

I've actually been looking as SPACE - Canada's equivalent - and been much more impressed with their attitude to the genre. It's very funny that their BSG trailers have been much stronger than the Sci-Fi Channel's.