The clock is ticking. The punishment that the already-50-years-old Galactica has sustained over the last four years has caught up with her and the ship is suffering minor hull breaches, fractures in the load-bearing beams and is starting down the slope that will lead to total structural failure. Meanwhile, the revelation of the Final Five's past has meant that they now have a greater understanding of the Cycle of Time and what it means, but not what that means for their own future. 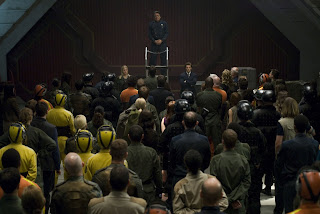 Deadlock sees Ellen Tigh and Boomer return to Galactica. Naturally Ellen's return is an excellent opportunity for the remaining members of the Final Five to get the answers they couldn't get from Anders the prior week before he passed out. Except they don't, for reasons never adequately explained. Also, remember how Tigh killed Ellen in Exodus Part II? You do? Excellent! The writers, however, do not, and that fact isn't even addressed. Also remember how Caprica-Six turned out to be pregnant? Apparently the writers did that because it was 'interesting' rather than because they had any idea on how to resolve it, so this episode arbitrarily kills off the unborn baby. In a subplot that redefines the meaning of the word 'random', Baltar convinces Adama to give heavy weaponry to his harem and employ them as an auxiliary security force.

Deadlock is pretty much a total disaster of an episode. It's not just inconsistent with the previous episode, it renders it totally nonsensical. At the end of No Exit Tory is muttering about not getting a chance to ask Anders about his song which switched them on ('All Along the Watchtower'), whilst Tyrol was bemused to hear about the 'head-beings' that the Final Five had apparently seen whilst on Earth. Do either of them ask Ellen about these matters instead? No. Not even remotely. The episode instead descends into mawkish soap opera relationship shenanigans which really don't work at all. Michael Hogan deserves some kind of award for heroic acting in the face of an incoherent and nonsensical script (despite everything, he totally sells the loss of his child at the end of the episode and his performance is 100% responsible for the extra star this episode gets below).

Someone to Watch Over Me is a far superior and more interesting episode, which considering it consists largely of Starbuck re-learning how to play the piano may sound insane. However, it's written by David Weddle and Bradley Thompson, responsible for many of the series' high points, and for my money the only writers to really 'get' Starbuck. This episode is a thematic sequel to the earlier Maelstrom, but those hoping for an explanation of how Starbuck came back from the dead are in for a disappointment (and the answer this episode is apparently leaning towards giving turns out to be an unintended red herring). Instead, Starbuck spends the episode developing a curious bond with a new piano player in the bar, even going as far as confessing her discovery of her own corpse on Earth. As Starbuck struggles to remember a melody from childhood it falls to the somewhat-neglected Hera, the child of Athena and Helo, to provide the missing piece and, sure enough, the song turns out to be hugely significant, finally providing a major clue as to what Hera's much-discussed role in events is. Of course, the crew only realise this just as Boomer is freed from prison (after playing Tyrol like a chump), kidnapping Hera and gets off the ship. Whoops. This is a pretty strong episode sold by a great performance by Sackhoff with an exciting climax that recalls the strongest moments of the series to date.

Islanded in a Stream of Stars is a quieter episode, mainly dealing with the emotional fall-out from Hera's abduction and the Fleet's abortive attempts to locate the Colony, Cavil's base of operations. On a plot level, the episode is somewhat static, but instead we are really shown how Galactica is dying and in its death throes it is tearing Adama's heart out along with it. This is well-played (although it gives us another 'Adama breakdown' scene, which is getting a bit old) and the final scene with Adama and Tigh is excellent. Elsewhere, Baltar learns Starbuck's secret and shares it with the entire Fleet, but Starbuck finds the response and the support surprisingly positive. Anders is hooked up to the Cylon datastream to try to reboot his mind, but instead it turns him into a Hybrid, which is a surprising turn of events. Overall, the episode is reasonably watchable but there is a distinct sense here that money is being saved for the big finale.

That finale kicks off with the first part of Daybreak. As a stand-alone episode, it is odd and doesn't really work, but as the first third of a longer story it is more effective. Unexpectedly, we are taken back (complete with some absolutely stunning CGI cityscapes) to Caprica two or three years before the Cylon attack and get to meet Roslin just before she lost most of her family in a car crash, and the first meeting of Lee and Kara and also Baltar and Caprica-Six. There's some great character moments here, such as meeting Baltar's father and seeing more of his background, but the timing feels a little bit odd. A season or two back this material would have been fascinating, but coming at the end of the series it feels a bit out of place.

In the present, the crew are preparing to abandon Galactica but Adama is dissatisfied at the way the ship is going to be left to die alone in space. When he learns that photos of the fallen are being left in the hallway of remembrance because the people who put them up are themselves now dead, he snaps and decides that going after Hera, and in the process giving Cavil a bloody nose and sending Galactica out in a blaze of glory is the way to go. Somewhat bizarrely he doesn't really sell the (considerable) military benefits of the operation to his crew, instead asking them to just come along because Hera's a nice kid. Unsurprisingly he doesn't get a huge number of volunteers. Hey Adama, you suck at PR. Never go into politics. Anyway, he does just about manage to scrape together the barely viable number of crewmen needed by pardoning a bunch of the former mutineers and the mission is on! Thanks to Anders' new Hybridness they track the Colony to the accretion disk of a black hole and learn there is no other way in or out of the local system except just dropping right on top of the Colony and opening fire. So plans are formulated, gruff and stoic looks are exchanged and the 'to be continued caption' drops inevitable into place.

Wowsers. I'll be discussing the (massively) controversial final episode in its own review in a day or two, so stay tuned for that.

Hey, guy, keep on the good work on the blog! I'm adding it to my feeds -- just thought I'd let you know that you have another appreciative reader.