"Go tell the Spartans, strange passing by,
that here, obedient to their laws, we lie."
- inscription on the monument to the fallen at Thermopylae, by the poet Simonides

480 BC. The Persian Empire's invasion of Greece proceeds apace. Their army marches down the east coast meeting little resistance until they reach a narrow pass between Mount Kallidromos and the Malian Gulf, called the Hot Gates, or Gates of Fire. Here, the armies of Greece have sent a small force to delay their advance. Four thousand Greeks in all, with three hundred elite warriors of Sparta forming their core, to stand against the uncountable multitudes in service to the Persian King Xerxes. For the better part of a week, the Greeks delay the Persian advance, giving time for Athens to be evacuated and for other armies from across the Peloponnese to muster. The Persians finally exhaust more than 20,000 lives to kill less than a fifth of that number. 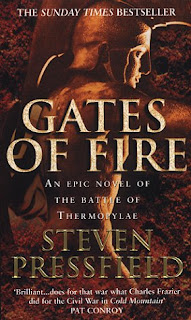 After the battle, advancing on Athens, Xerxes is troubled by the supreme valour of his foe, and guilt-stricken at his own orders to desecrate the corpse of Leonidas, King of Sparta and leader of the Greek coalition. He receives word that a single auxiliary in the service of Sparta has been pulled from the stack of corpses at the site of the final confrontation. Eager to learn more of his enemy, Xerxes orders that this man, Xeones, be treated and healed so he might tell his story. The captive haltingly recounts the tale of his life, how his home city of Astakos was sacked by the Argives, how the Spartans later sacked Argos in turn, and how this led to him voluntarily swearing allegiance to the Spartan cause. Xeones tells of Sparta and its military code, of its king Leonidas, of its great warriors, and of its women, whose bravery and fortitude give the Spartans their backbone. The Persians destroy Athens but suffer a naval reversal at Salamis which threatens the campaign. As they prepare to confront the remaining Greek armies at Plataea, Xerxes gradually learns the true nature of his enemy.

To anyone who hated the graphic novel and movie 300, Gates of Fire provides the antidote. If you liked 300, then Gates of Fire provides a much more accurate account (if slightly less mythic) of the same events. Of the two works, Gates of Fire is the vastly superior. Steven Pressfield is a superb writer, structuring the novel as a report from the Persian historian to his king, but at the same time telling the story of a simple Greek soldier, Xeones, whose fate becomes intermingled with that of the mighty. Pressfield's portrait of Sparta is unflinchingly brutal. This is a harsh, almost fascistic society in which the weak and crippled are killed and only the strong and fit survive. But moments of kindness and humility show that even this supreme race of warriors is still human. Pressfield is also careful to pay tribute to Sparta's allies, who often receive short shrift in recountings of the battle. The bravery and capability of the Thespians is in particular recounted, and even the Persians are humanised. Xerxes himself is a king carrying out his father Darius' planned invasion, but at times seems torn by indecision and inexperience. 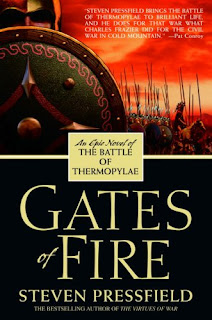 Pressfield's mastery of character is impressive, with even the most positive of characters shown to have a dark side, and the darkest have their moments of charity and bravery. The book addresses the themes of honour and how a man may master his fear, but just when the testosterone threatens to overwhelm the narrative he cuts away to the women of Sparta, showing how their role and station in Spartan life is essential and without them, the Spartan men could not achieve what they must in battle.

Gates of Fire (*****) is an impeccably-researched and gloriously compelling account of war, love and honour in the struggle that secured the future of Greek - and thus European - civilisation. The novel is available now in the UK* and USA.

* Amazon.co.uk, ludicrously, doesn't have a listing for the book, so I have linked to the Book Depository website instead.
Posted by Adam Whitehead at 20:37

A book I've been intending to read for a looong time (ever since my Ancient History degree, really...). Which is why I know it's on Amazon, because it's on my wishlist :) http://www.amazon.co.uk/Gates-Fire-Novel-Battle-Thermopylae/dp/0553812165/ref=wl_it_dp?ie=UTF8&coliid=I2EVSPIQ8AYCQH&colid=2S4MEQ9GKZRHG

This is Pressfield's best book by a country mile. While he has written several excellent books set in Ancient Greece he really hasn't written a book as involving as Gates of Fire. Perhaps it is because of the glorious nature of the source material and the heroic stand of the Spartans but Tides of War and the others just don't reach the heights of his first Greek novel.

As you rightly say it is vastly superior to 300, which left me fuming.(I studied Ancient History at uni). Spartans looking like buffed Chippendales?? A mutated hunchback Ephialtes?? A ten foot tall gay icon as Xerxes?? WTF?

If you don't mind coming forward a couple of millenia, Pressfield has released a book about the SAS attempting to assassinate Rommel during WW2. It's a bit outside the old SF/Fantasy world but it is quite fantastic. Very heroic, very moving, just like Gates of Fire.