Some Major WHEEL OF TIME News

It just goes to show how quickly news can develop on the Internet. 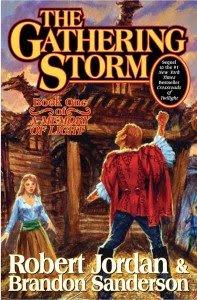 Rand al'Thor busts some moves on the eve of the apocalypse, for some reason.
The final Wheel of Time novel, A Memory of Light, has been split into at least two but possibly three volumes (i.e. if the recession gets worse it'll be three). The first sub-volume, given the hilarious generic title The Gathering Storm, will be released in November 2009. But sub-volumes II and III (if it goes that far) will only follow at 12-month intervals. According to the website to break the news, Tor will be releasing the book in tradeback rather than hardcover, which sounds insane to me.

EDIT: Rereading the press release, I think they mean there will be a tradeback as well as a hardcover. This is still noteworthy as Tor haven't issued a volume in this series in tradeback in some considerable time.

EDIT2: Some fans seem to be clinging to the hope this is a hoax. I hope so too, but given that Barnes & Noble and Amazon.ca now both list the book under the new title (not the cover though), I really doubt it. The cover and the three-volume thing could be fake and indeed I hope it is.

EDIT3: Dragonmount have confirmed a formal announcement will follow in the next couple of days on this issue.

Brandon Sanderson's comments (via DarthAndrea on Dragonmount, many thanks!):

"I wish I could say something official, but it's just not my place. Harriet rightly gets to release information like that. I did just fire off an email to Harriet and Tor, suggesting that they respond to this and speed up their timetable for a press release.

As for that cover, that strikes me as a rough mock-up rather than the final version. For instance, I'm surprised it mentions this as a sequel to Crossroads of Twilight, rather than Knife of Dreams. (At least, I think that's what the image says. The text is kind of hard to read.)
That's just one of the things that strikes me as odd about the cover. I can't say more yet, I'm afraid.

The short of it is I doubt this is a hoax, but I also doubt that everything you see here is official. Some things are getting garbled as they get passed from ear to ear. Keep an eye out for more news, hopefully Thursday or Friday. Feel free to pass this along."

Sanderson also has a blog entry on the matter here.

In a later blog entry, Sanderson reports that he has received word from Harriet that she has not seen, approved or signed off on any cover art at all, and the cover art released must be a very rough mock-up released by accident. Sanderson also now reports that the official press release will follow early next week. Tor considered releasing it early, but had already timed the release with other news outlets, so it cannot now be changed.

"There is no cover for the next Wheel of Time book available yet. The formal Wheel of Time update has been scheduled to release two weeks before JordanCon, with personal words from Harriet McDougal and Tom Doherty. This is going to be an exciting year, so we appreciate your patience and enthusiasm!

Check out Dragonmount and Tor.com on Monday morning."

There you have it.
Posted by Adam Whitehead at 00:52

This is getting released in hardcover in the United States.

This seems like someone's idea of a joke. A dumb unnecessary joke.

100% agreed. Knife of Dreams had a 1 million hardcover print run which apparently sold out. That's more than Stephen King got for the last DARK TOWER book. It is totally preposterous the next book wouldn't get released in hardcover. I could see them dropping the quota due to the recession, but just not having a hardcover release at all? Highly unlikely.

I am, however, convinced that Tor is fully capable of going to three volumes for this. I'm hoping they won't out of respect for their formerly biggest-selling author and if it is three volumes, it's because Sanderson has decided he can't do this in less than 900,000 words.

Either that or the whole thing (including the horrendous cover) is an April Fools gag that slipped out early.

I'm also very skeptical. Tor is prepping an annoucement for next week and this seems like someone's idea of a bad joke prior to that real announcement.

I fully expect it'll be two volumes though.

Hmmm, a Tor publicist just told me last week some Wheel of Time news was about to break, so this might be legit. I guess their expecting fans to snap up the books just to see how it all turns out.

SQT: She told me, too. But I don't think this exactly would be the news. It's probably official cover art and reconfirmed publication date for Volume 1. Maybe titles for Vols 1 & 2.

But three volumes? That makes me skeeve and I really don't think they'd do it. Maybe for MMPB, but not the hardcover release.

Jason at Dragonmount, who has contacts with Harriet, Brandon and Tor, said cryptically that this was an 'interesting find' and Dragonmount would carry the official news in the next few days.

I assume he'd crush a fake cover or false press release outright if he could, so it looks like at least some of this info is legit.

I am trying to find independent verification.

I see that the American Book Center lists ISBN and ISBN-10 numbers for "The Gathering Storm", but searches for those numbers on Barnes & Noble, Amazon, Amazon.ca, and Borders return no results.

Does anyone else have independent corroborating evidence from a well-known and well-respected bookseller website?

They are listing both a hardcover and a leather-bound edition for November 2009 under the title 'The Gathering Storm by Robert Jordan and Brandon Sanderson', and a mmpb in November 2010.

Barnes and Noble's entry is really hard to find. I had to leave the site and do it through Google instead:

I hope Bran Sanderson is not digging his own grave for his promising career. I just discovered him, I liked Elantris and really look forward to his next novels.

Having to finish a great series that turned into mud over time is not really a thankful task, I fear he will become the punching ball of critics and fans alike.

Splitting the final novel in 2 or 3 volumes is ... horrible. Jordan himself said something along the lines to make a Memory of Light the final novel, even if it would mean that it would become a 1100+ pages monster.

Sanderson has a new post up that says Harriet hasn't seen nor approved of the cover art. It's looking more and more like hoax.

The art could be, yes, and maybe the 3 volumes thing is as well. But the title is up on several 'proper' booksellers now, so I doubt that is a hoax.

And by 'hoax', I mean 'mistaken early release'. Unless it is an April Fool's joke that escaped early (and I doubt Tor would be that tasteless), I don't see how anyone could put together such a hoax in such a short time. And it would be a bit pointlessly lame (admittedly because it is simply impossible to create a cover so bad we would not believe that Darrell K. Sweet was capable of drawing it).

Maybe he lets his kids do the drawing these days. :D

It appears as though the taint on saidin has caused Rand to develop rickets. The Dragon Reborn needs more sunshine and milk or else someone's going to have to carry him to the Last Battle.

I hope this is a joke... at the very least the cover art is horrendous! And a 12 month break would be terrible - I could live with 12 weeks. The title doesn't bother me for some reason. I am only up to The Dragon Reborn on my Wheel of Time reread, so I am trying to pace myself to finish up in November (lots of other books to read in between Wheel of Time books).

I really hope this is a joke.

"It was never supposed to go outside of Tor, and is NOT the final cover, not even close to it. ... There is truth to some of the rumors, but there is also a lot of bad information going around."

Interesting. I bet the husband is going to enjoy reading it. Is this available on kindle?