The Player of Games by Iain M. Banks

Jernau Morat Gurgeh is a master games-player. From his home Orbital, he has mastered many different games played by many different species and been beaten rarely. Slightly bored with his life, the Culture offers him the chance to travel to the cruel Empire of Azad and there take part in the most complex game the Culture knows of, a game so important that those who win it can become generals, statesmen and even emperors. 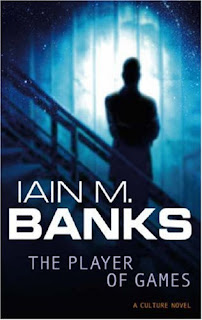 As an alien, Gurgeh is of course barred from winning public office from the game, but is determined to win anyway, even when doing so may strain relations between the Azadians and the Culture. However, nothing is as it seems.

The Player of Games, the second Culture novel originally published in 1988, is less epic than Consider Phlebas and much more personal. It is nevertheless every bit as compelling. The first third or so of the novel follows Gurgeh's life on his home Orbital and his growing dissatisfaction with life there which provokes him into making a rash move which soon has him considering the offer to journey to Ea, the Azadian homeworld. As the story develops, we explore both the Culture and the alien society through the games that Gurgeh plays, but the book itself is also a game. The characters are the pieces, being moved around for stakes far greater than those in the fictional game itself, and the finale offers a highly satisfying resolution and explanation of what has gone before.

Gurgeh isn't the most likable of protagonists, as he's an obsessive who is naive about the world outside his games, but at the same time his conflicts make for interesting reading. The secondary cast of drones, Azadians and fellow Culture agents are all well-drawn, and their reactions to Gurgeh tell us a lot more about his character than he reveals himself (with a couple of very brief exceptions we are in Gurgeh's head in a limited third-person POV for most of the book). Banks' black sense of humour is also present and correct.

The Player of Games (****½) is an unusual but highly satisfying SF novel that couldn't be more different from its predecessor but works just as well. An ingenious and compelling story of games, intrigue and character, and well worth a look. The Player of Games is available now from Orbit in both the UK and USA.
Posted by Adam Whitehead at 17:31

Email ThisBlogThis!Share to TwitterShare to FacebookShare to Pinterest
Labels: iain m. banks, the culture, the player of games

I felt that because Gurgeh was written to be an unsympathetic character that there was a possibility that he actually ended up destroying the only thing that he ever really loved.

I also enjoyed the shift in Gurgeh's temperament as he spent more and more time in the Empire. It was subtle, but there was a bit where he was watching mail from his drone friend which showed people wandering around his home. "Who did they think they were" marked a very unCulture like attitude.

A nice review of my favourite book.