Hothouse is a 'fixup' novel originally published in 1962, comprising five novelettes originally published in 1961 in The Magazine of Fantasy and Science Fiction. The combined novelettes were jointly awarded the 1962 Hugo Award for Best Short Fiction (and not Best Novel as sometimes claimed: that went to Heinlein's Stranger in a Strange Land that year). In those pre-modern telecommunications days, the first the author knew of the achievement was when the award turned up on his doorstep. 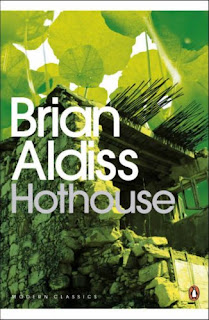 Hothouse, for a long time published under the title The Long Afternoon of the Earth, is set in an vastly distant future when the Sun has begun to swell to its nova stage. The Earth has become tidal-locked, with one face always pointing towards the Sun, and the Moon has drifted out of orbit around the Earth into a co-orbiting position around the Sun, where it has become tethered to the Earth in vast cobwebs spun by mile-long spider-like entities. As the eons have passed, most forms of animal life on Earth have perished, allowing the plants to become dominant. A vast banyan tree now covers most of the Indian subcontinent, with a few surviving tribes of humans (now shrunk to a small size by evolutionary needs) running around its city-sized branches in constant fear of the mythical 'ground'.

The book follows the fortunes of one such tribe when the adults decide the time has come to ascend via the strands to the Moon, leaving the children to fend for themselves. The actions of the wilful man-child Gren sees the group splintered, and Gren's encounter with an intelligent but parasitic entity known as the morel leads him and his mate on a long, curious journey through the landscape of the dying world.

Hothouse fits firmly into the 'Dying Earth' subgenre of SF&F, preceded by Vance's Dying Earth books and followed by Gene Wolfe's Book of the New Sun. Hothouse is deliberately not a hard SF novel - orbital dynamics would prevent the Earth and Moon being permanently tethered together - but a sort of picturesque travelogue through a bizarre and often grotesque land of fat 'tummy-belly' men, giant stalkers, sentient mosses and flying predators. In terms of atmosphere it is stunning and Aldiss' inventiveness does not let up, with every other page seemingly bringing new creatures, new races and new ideas to the reader. 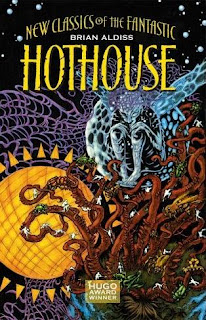 As Neil Gaiman's introduction says, it is not a conventional or modern novel. Characterisation is not the focus of the book and although Gren is an interestingly-drawn protagonist, the actions and thought-processes of the post-human characters are so far removed from our own that they are not always easy to relate to. But Aldiss' lesson in this book, as much as there is one, is that life, even in some distant, alien and unfathomable way, will still find a means to survive and propagate.

Hothouse (****½) is a demented, dark fairy tale of survival at the end of time, and is weird, baffling but sometimes brilliant work of the imagination. It is available now in the Penguin Modern Classics range in the UK and in the IDW New Classics of the Fantastic range in the USA.
Posted by Adam Whitehead at 15:30

Obviously I'm a sucker for Dying Earth books; I've now ordered this one!