Iain Banks had already published three mainstream novels by the time Consider Phlebas was published in 1987. When his publishers suggested using a pseudonym to make it easier to distinguish between his SF and mainstream work, Banks decided to adopt the impenetrable alias 'Iain M. Banks' for his SF and leave his mainstream work under the name 'Iain Banks', a tradition he maintains to this day. 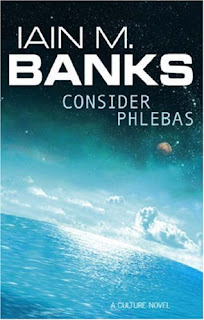 Consider Phlebas introduces the Culture. A vast, utopian society of trillions of humanoids populating planets, Dyson Spheres, Niven-esque Rings and Orbitals and vast sentient starships, the Culture is the ultimate civilised society where the people have given over the running of their civilisation wholly to machines - the Minds - so they can chill out and have a good time. Of course, this leads other species to view them as weak, indolent and decadent. Suspicious of the steadily expanding sphere of Culture influence in the Galaxy, the fanatically religious Idirans decide to take action and declare war against the Culture. Soon, the Culture is retreating on every front as the aggressive Idirans sweep towards the Culture homeworlds, and the Galaxy anticipates a quick end to the war with a negotiated settlement.

Four years into the war, the Culture is still holding out, to the bemusement of the Galaxy at large. Whilst warships fight across mind-boggling distances, Idiran and Culture agents are also battling for influence on various neutral worlds. During one such clandestine operation, the Changer operative Horza (leasing his services to the Idirans) runs afoul of a Culture Special Circumstances agent and is arrested. Managing to escape under the cover of an Idiran planetary assault, he finds himself shanghaied into the crew of a mercenary ship and then dragged halfway around the Galaxy before he can undertake his next Idiran mission, namely the recovery of a Culture Mind that jettisoned from its ship and crashed on a planet sealed off from the rest of the Galaxy by an ultra-powerful 'ascended' species. 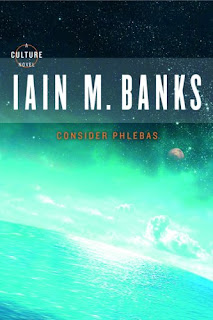 Consider Phlebas wasn't Banks' first SF novel: he had written several others previously (including the ones later published, after much revision, as Player of Games and Use of Weapons). This experience shows in a book which is highly polished and thoroughly readable. The storyline is gripping and, thanks to Banks' black humour, highly enjoyable with some decidedly Douglas Adams-esque moments of humour (the increasingly exasperated Culture drones are particularly amusing). Horza makes for a fascinating protagonist, a sympathetic guy (despite doing some very bad things) whose problems and arguments with the Culture are understandable. By introducing the Culture in this way - by making it almost the 'bad' guy from Horza's point of view - Banks allows for much greater analysis of the society and the way it works (not to mention some excellently subtle worldbuilding) rather than having a Culture hero telling us how great it is.

The result is a book that is fast-paced, overflowing with ideas (the Orbital Vavatch, its Megaships, the Culture ships and the Command System are all genuinely impressive SF concepts) and is genuinely funny in places, although still with a thoughtful, wry ending. An excellent introduction to Iain Banks' work. The prose isn't quite as polished as his later works, but is still of impressive quality.

Consider Phlebas (****½) is available now from Orbit in the UK and USA.
Posted by Adam Whitehead at 22:44

Gonna read this thanks to your review.
I'll let you know what I think, cause I'm sure you're dying to know.

Banks is definitely one of the defining modern authors of the genre, so he's definitely worth a look. Let me know what you think!

Nice review. Orbit US sent me their reissues of the first three Culture books as they released them last year. Reading your review here and the thread at Westeros prompted me to pluck this one off the "to read" pile.

I read Matter when it published, really liked it so I hope the early books work just as well.