On 12 October 2009, the sixth Hitch-Hiker's Guide to the Galaxy novel, entitled And Another Thing, will be released. This is an impressive feat, given that the series' creator and writer Douglas Adams passed away eight years ago. The new novel has instead been written by Eoin Colfer, creator of the popular Artemis Fowl series. 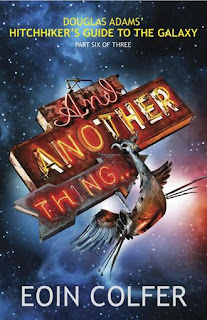 The notion of an author picking up the works of a deceased writer and carrying on has always been controversial. Sometimes it has led to interesting results. Most times it hasn't. If a series with a major, ongoing storyline is cut short by the author's untimely demise, and if the author had enough warning to prepare detailed notes and give his blessing for another writer to finish the work, than that is one thing: David Gemmell and Robert Jordan did this for their novels Fall of Kings and A Memory of Light respectively. But for an author to pick up a series that was essentially finished seems dubious.

Of course, Colfer was asked to pick up the baton by Adams' widow, and Adams himself had spoken of a sixth Hitch-Hiker's novel to retcon the overtly nihilistic ending of the fifth book, Mostly Harmless, which he had written in a burst of depression. So the existence of this book isn't entirely foreign to his wishes. But whether he had any notes for a new author to work from, or if he would have approved of another author picking up on his signature series, is another matter altogether.

Eoin Colfer - who offers his take on the job here - is a talented and funny author, and certainly an excellent choice for this project. But I cannot help feeling uneasy whenever this sort of thing happens, and questions over the publishers' motives are certain to arise. However, as a tribute to Adams and his series - 2009 is the thirtieth anniversary of the publication of the first novel - this could still be worth a look.
Posted by Adam Whitehead at 21:22

Email ThisBlogThis!Share to TwitterShare to FacebookShare to Pinterest
Labels: and another thing, douglas adams, eoin colfer, news, the hitch-hiker's guide to the galaxy