To the east of Midderland and the Union lies the land of Styria, a feuding patchwork of city-states consumed by the 'Years of Blood'. Duke Orso of Talins has spent years expanding his power across the land, and city after city has fallen into his grasp thanks to his strong right arm, the mercenary army known as the Thousand Swords, led by Monza Murcatto and her brother, Benna. Their victories have made them famous and popular in Talins, perhaps a shade too popular. A brutal and bloody betrayal takes place, but the job is not completed and Monza is left - barely - alive. 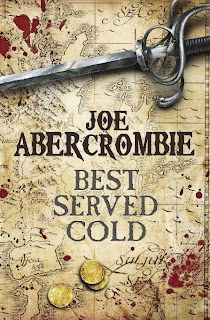 A shadow of her former self, Monza is consumed by the need for vengeance but she cannot kill seven of the most powerful men in Styria by herself. She needs allies, and finds them in a prideful poisoner, a thug obsessed with numbers and a barbarian from the North who just wants to do the right thing. Seven men they have to kill in six cities, and murder, mayhem and war lie before them.

Best Served Cold has been billed as the stand-alone follow-up to The First Law Trilogy, but that isn't entirely accurate. Whilst this novel can certainly be read with no foreknowledge of the series, it does pick up on some dangling plot threads from the trilogy and also lays a lot of pipe for future books. In fact, it feels a little bit more akin to reading Steven Erikson's Deadhouse Gates compared to Gardens of the Moon: a new land, a new and mostly self-contained storyline (although referenced in the prior work and setting up some things for later) and some new protagonists whilst at the same time remembering to include some of the characters from the first work (I counted at least five characters from the trilogy as reasonably major characters in the book, with several more cameos and a few mentions of others). The result is a book that satisfies as both its own work and a thread in a much larger tapestry. 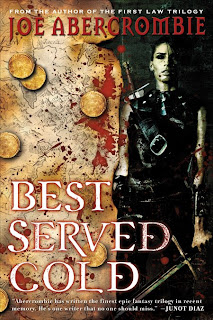 Best Served Cold is also one of the most morally ambiguous books I've ever read. Seriously, not a single person in the whole story comes off as in the right or in the wrong. The protagonists (the word 'hero' cannot be applied to a single person in the whole story) are often as dislikable and sometimes far more ruthless than the 'villains' whom they are trying to kill. They have their reasons and motivations which are pretty convincing, but none of them are nice people. The fact that Abercrombie still engages the readers fully with this tale of bloody mayhem and makes them care about what is going on is impressive.

The story is gripping and compulsive, the humour is blacker than midnight, the prose is a notable step up from the already-enjoyable First Law Trilogy (although the gloriously terrible sex scenes remain intact) and the characters massively conflicted. There are more enormous battles and some even bigger, eye-raising twists than those from the end of the prior trilogy (although nicely set up along the way). The only minor niggle I had was with the "Ha! I poisoned you, but no, I'm just kidding...or am I?" plot device, which has now gone way beyond cliche. It is a very minor element, however, that does not spoil overall enjoyment of the book.

Best Served Cold (*****) is not for everyone, but if you like your books gritty, dark, funny and violent, than I can recommend this book without hesitation. Between this and Retribution Falls, it's shaping up to be an amazing year for genre fans.

Best Served Cold will be published on 18 June 2009 in the UK from Gollancz and on 29 July in the USA from Orbit US.
Posted by Adam Whitehead at 21:09

Looks really interesting. I had already heard about Joe Abercrombie, but you really convinced me!
Maybe I'll think to buy the books. Are Joe's English difficult to understand?
;)

(Sorry for the English, you know, I'm portuguese...)

He's not too difficult to understand. I was checking his foreign sales and he has Russian, German, French, Spanish and Czech editions but no Portugese one yet.

Yes, I know :P We, the Portuguese SF&F fans, are trying to convince Portuguese publisher Saída de Emergência (one of the best in the genre, in Portugal :P) to translate this author to our language :)


PS: I've arrived from Speculative Horizons, and I rally enjoyed! ;)
Keep up the good work! ;)

I like "gritty, dark, funny and violent" and I will definitely read this novel. And Joe Abercrombie will reach the Romanian market soon too :)
Very nice review, Adam :)

Can't wait for this one! Nice review!

Curse you, Abercrombie! This means war! ;)

Oh, ps, Adam, I will be heading to Eastercon this year (I've sorted it out now) so give me a shout if you do decide to go.

Roaring laughing at the serendipity! Just finished Best Served Cold and am three quarters of the way through Retribution Falls at the mo..!

My only minor gripe with BSC was that the blurb on the back "...And a Northman who just wants to do the right thing.." kinda implied it was Ninefingers... But then I guess I shouldn't have assumed!!

It was a cracking read, much darker than the First law series...

I did find Murcatto to be far more moral than one would expect, perhaps she's the only one I could consider a hero... it's interesting to learn the real reasons for her actions throughout the book. Hmm, I can't say more to those who haven't yet read... but DO READ IT!! :-)