Mistborn Heads to the UK

Brandon Sanderson, who has had four successful fantasy novels published in the USA with a fifth on the way, is going to have his books published in the UK for the first time, starting at the end of 2009. His Mistborn Trilogy is going to be released over the course of six months from Gollancz, with The Final Empire currently planned for October, The Well of Ascension for December and The Hero of Ages for February 2010. The trilogy, which has already attracted a lot of acclaim in the USA, shows a world in the aftermath of a traditional 'hero sets out to save the day from Dark Lord' narrative where things went pear-shaped and the Dark Lord won. 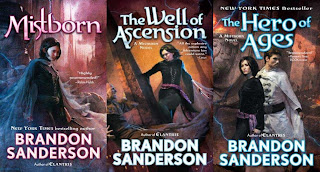 Sanderson is also the writer chosen to finish Robert Jordan's Wheel of Time series. Currently it looks like an official announcement about the status and publication date for the final book, A Memory of Light, will be made at JordanCon in the USA in April, where Sanderson, his editor Harriet (also Jordan's widow) and Tor Books head honcho Tom Doherty will be in attendance. The money is currently on the novel, already considerably longer than any other book in the series, being split in two, with the first part being released on 3 November 2009 with the second being released in spring or summer 2010.
Posted by Adam Whitehead at 17:41

I read a lot about this trilogy.
So I decided to buy the trilogy (US version) next month (April).