Over the past decade, The Dresden Files has turned into one of the big success stories of the urban fantasy genre. Set in modern-day Chicago, it follows the fortunes of Harry Dresden, a wizard-for-hire who offers his services to those in need (and who preferably can pay him). Mixing up elements of the supernatural with a detective story format, the series has proven successful on both sides of the Atlantic with ten further books in the series published and a short-lived TV adaption proving a cult hit a couple of years back. Storm Front is the first novel in the series. 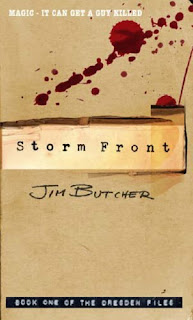 The perpetually cash-strapped Harry Dresden is given some financial relief when two cases land on his desk at the same time. A woman is searching for her husband, who has gone missing after becoming fascinated by the use of magic. Meanwhile, the police have called on Dresden's aid after two people are found dead in an apartment, their hearts apparently remotely exploded by magical means. It isn't long before Dresden is up to his neck in trouble, as the two cases start overlapping with the interests of the Mafia and Dresden's own unorthodox approach soon lands him in trouble with the guardians of magic, the White Council. 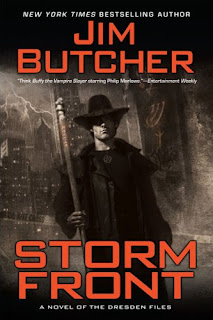 Storm Front is a decent debut novel. The plot clips along at a fair old pace, and as a mystery it's fairly well plotted and laid out. The characters are strong, with Harry making for an engaging protagonist and his circle of friends, allies and enemies all being an interesting bunch. There isn't a lot of 'weight' to the novel, and it feels a bit on the slight side, but there's much fun to be had here. 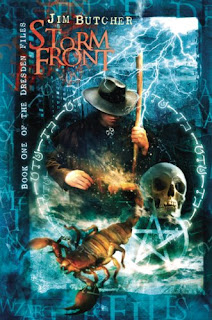 However, I wasn't too impressed by the Luddite diatribe we get no less than three pages in, in which all of the evils of the world are blamed on technology and progress. Yeah, it makes sense for Dresden to have those views as a wizard who can't use technology (his magical field causes computers and other electrically-powered items to fritz out around him), but it was a bit too preachy too early in the book and left a bit of a sour taste in the mouth. Luckily this was forgotten within a few chapters as the story picked up and really got going. There are some other problems, though. The 'mystery' is completely solvable by the reader within the first fifty pages (you may be even be able to work it out from the plot synopsis on the back of the book), so waiting for Harry to catch up to where you are can be a bit mildly frustrating. The book is also inconsistent in its worldbuilding: after spending the first chapter or so telling us that no-one believes in magic and most of Harry's callers are pranksters thinking he's a nutter, we then learn that the police keep him on a retainer to investigate crimes and even average people on the street know not to look a wizard in the eye for too long, which seems self-contradicting. There's also the nagging feeling that you've seen this story before, with a few names and roles swapped around, on Angel. But, despite these problems (all of them hallmarks of a first time writer), the book is still reasonably fun to read. Butcher has an easy, approachable and undemanding prose style and after Dresden spends most of the book being passive and reactive to events, watching him go all Takeshi Kovacs at the end is a treat.

Storm Front (***) is a fun and breezy novel that is more of a light snack than a full meal, but still an enjoyable way of passing the time. I'll be checking out the remaining books in the series in the near future. The book is available from Orbit in the UK and Roc in the USA. A special limited edition from Subterranean Press came out a while ago and you may still be able to track down some copies online.
Posted by Adam Whitehead at 16:08

I found the first several books in the series to be enjoyable for light reading.

As someone very familiar with modern-day Chicago, my biggest problem with Storm Front was how unfamiliar Butcher clearly was with the city.

It promises to be a fun series, and I'll definitely be looking at the other books over time.

The review pretty much tallies with my thoughts- the first book is froth. Lots of fun, but the series wouldn't have the increasing (and, in parts, increasingly manic, it seems) fandom it enjoys if it didn't build up.
Happily, it does, I reckon you'll noticed a marked improvement with each of the next three books - it's still fluff, but it's supremely competent fluff.

I more or less enjoyed the first couple books in this series as well, and while the reading was incredibly light, I tore through the books fast. I don't know if that's a good or a bad thing, but it generally feels good to read a book that fast and move on to something else. But then I usually forget the book fairly quickly, which certainly isn't good. Butcher has a fantasy series out too, have you checked that out yet?