In a surprise move, Taika Waititi has confirmed that his next project will be a follow-up to his 2017 movie Thor: Ragnarok, rather than his live-action take on Akira that Warner Brothers had fast-tracked for a May 2021 release. 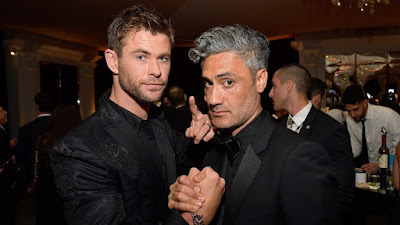 Waititi was in the middle of meeting Japanese actors for the key lead roles in Akira (presumably Tetsuo and Kaneda), so the decision to pivot to Thor 4 is surprising. However, according to the Hollywood Reporter's sources there were some concerns over the currently in-development script, and by putting Thor 4 first, Waititi is giving the script more development time. This seems to have been confirmed by the fact that Warner Brothers is still keen on having him direct, so have put the film on hold until Thor 4 is done rather than looking for another director. The power Waititi has over the project is notable in that he apparently convinced the sceptical studio to cast Asian actors, re-set the film back in Neo-Tokyo (several previous iterations of the script relocated the action to a futuristic New York) and mount the film as a multi-part project, all of which seems to remain in play.

Waititi's next projects for release are Jojo Rabbit, a smaller-scale movie starring Scarlett Johansson, which is due for release in October, and several episodes of The Mandalorian, the Star Wars live-action show debuting on Disney+ in November. Waititi may also helm an episode or two of the second season of What We Do in the Shadows, the hit comedy based on his 2014 movie of the same name (he helmed three episodes of the first season), depending on other commitments.

Disney and Marvel likely put significant monetary incentives in front of Waititi to helm Thor 4, especially given that the movie may also function as a stopgap Guardians of the Galaxy film (given the events of Avengers: Endgame) which Disney may find desirable given that James Gunn will not be able to start work on Guardians of the Galaxy Vol. 3 proper until 2021 (for a likely 2022 or 2023 release at the earliest), given his commitments to the new Suicide Squad movie.

A timeline for Thor 4's release date is likely to be announced this weekend at the San Diego Comic-Con, where Marvel will outline their movie projects for the next few years.

Akira fans don't have too much to complain about, however, as the original creator is working on a brand-new anime adaptation of the original manga for television. Unlike the 1988 movie (which is also getting a Blu-Ray and 4K remaster for release next April), this new adaptation will faithfully cover all six graphic novels and over 2,000 pages of the story. The original film, released before the manga was complete, had to heavily compress the story to fit into two hours.

It is also possible that the new anime - which we'll be lucky to see before 2022 or thereabouts - will further interest in the live-action movie, which Warner Brothers has taken into consideration in the decision to bench the film whilst Waititi is busy at Marvel.
Posted by Adam Whitehead at 22:05