Terry Goodkind has, for reasons unknown but open to speculation, chosen to self-publish his latest Sword of Truth-related novel, The First Confessor: The Legend of Magda Searus (not the sequel to The Omen Machine, which will apparently follow next year from Tor, but a new prequel to the series). 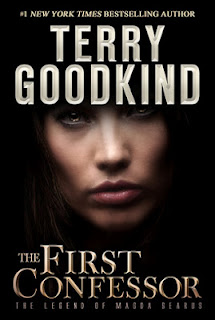 This new book was released as an ebook exclusive several days ago. As an ebook-exclusive, it is little surprise that the book was heavily pirated on release, even after Goodkind posted a message to his website explaining how the economics of ebook publishing worked and politely requested that people refrain from doing so. So, on his Facebook page, Goodkind named and shamed one of the alleged pirates, posting their personal information and several websites where he was active. The alleged pirate apparently withdrew several of his pages and 'attempted' to offer an apology, according to a Goodkind fan monitoring the situation (posting on Westeros.org in this thread). Apparently, this was after several private overtures to the individual were ignored.

An surprising situation. Sharing someone's personal information on the Internet without their permission, even in this situation, is highly dubious (although Goodkind allegedly took legal advice before proceeding with this move). The individual appears to have admitted culpability, which helps, but it is still a bold step to take. At the same time, 'naming and shaming' can be an effective tactic in discouraging piracy. It could also backfire and result in even more piracy and negative publicity for the author. Seeing how this unfolds over the next few weeks should be very interesting.

EDIT: Apparently the original offendor did not and has not offered any kind of apology or restitution to Terry Goodkind or his representatives.
Posted by Adam Whitehead at 16:29

I would argue that he gets enough negative publicity from writing lousy books. But that's just me.

Imagine the shame of being outed as a Goodkind reader.

This is very interesting.

On one hand, I don't have much sympathy for pirates and actually applaud someone as high profile as Goodking really calling them out. Stuff like this may actually put a dent in it.

On another hand, I have real bad taste in my mouth after writing that paragraph above.

On yet a third hand, I find it interesting that Goodkind is so anti-piracy. The philosophy he advocates for should applaud piracy as perfectly legitimate. I suppose that it's no surprise to see him draw the line at his bank account.

Yeah, I wasn't going to go into the quality issues of the book (the Westeros link has a detailed discussion of the novel in some detail and it sounds like the same old). The situation does raise some interesting questions about the piracy issue, however.

"On yet a third hand, I find it interesting that Goodkind is so anti-piracy. The philosophy he advocates for should applaud piracy as perfectly legitimate. I suppose that it's no surprise to see him draw the line at his bank account."

Exactly. According to his own heavily preached philosophy of a completely free market, it's just basic logic that something with unlimited supply (like an e-book) would see its price go to zero.

Hmm, what a very strange situation. I really have to wonder how much of Goodkind's piracy-monitoring is really just a marketing scheme.

I mean, until this news broke, I had no idea he was even working on a prequel, much less self-publishing it. Now, simply because he took the bold step of calling out a thief, his book is suddenly 'hot'.

I did some looking trying to find Goodkind's actual post where he did the "name and shame" routine but I can't seem to find it. Could you post a link to it, if you've got one?

Goodkind is, it seems, as skilled at contradicting his own philosophies to get as extra buck as he is at writing pure unadulterated crap.

First reaction was to salute the Yeard for doing this - even though I can't stand the guy, I liked seeing anyone crucify someone stealing books in any form.

BUT - as mentioned above, TG complaining goes directly against his entire philosophy espoused in his trashy treatises on free markets and S&M. In a world with TG's ethics, its only fair that someone takes his book for free and passes it on.

Wait? WHO in their right mind would pirate a shitty excuse for a series of fantasy novels?

Neth: Not as anti-piracy as you might imagine. See here:
http://www.terrygoodkind.com/theoracle/ebooks

This is vigilantism, plain and simple. Very creepy to see it coming from a fairly big name in SFdom, but I'm not terribly surprised, given Goodkind's philosophy. The guy has always exuded that quintessential libertarian "I've got mine, f--- you" vibe. This is just a natural extension of it: "touch mine and I'll f--- you."

I wonder what people would say if it was Martin or Erickson that did this. A lot of people dislike Goodkind but outing a pirate. Bravo.

Come on, guys. I assume that most of the readers of this blog really likes books, and therefore should be against piracy (Take a long hard look at PC games for reference) regardless of how you feel against the author of the (e-)book in question.

The calling out of the pirate seemed to do the trick, and would appear to be a better deal for him than if the author had pressed charges or initiated a lawsuit.

I would really hate for piracy to ruin the e-book market because it is fantastic to be able to lug around your entire library everywhere you are.

Neth, Bonzi, The Writer, & Anon: I'm not an Objectivist or a libertarian, but you are each fundamentally misrepresenting those philosophies. A libertarian would say that my right to punch ends at the tip of your nose. They would agree that free speech ends at the point where someone screams "Fire!" in a crowded theater. Their point is to have the _minimum_ amount of government involvement to guarantee individual rights--such as the right to property. Thinking they're okay with theft is a total misrepresentation. There are some very intelligent libertarians out there: they realize that a free market doesn't work if people can just steal whatever they want. Call Goodkind whatever you want, but he's not being a hypocrite on this point.

Pirates these days... That's like raiding a bank and leaving with an old, dirty rug.

It is moronic to talk of "stealing", when its really copying. Stealing involves taking something from the owner which then is not in his posession any more.

Nobody is forced to write for a living. So, writer, if you cannot any more make ends meet, you are invited to do something different.

The problem with ebooks (and electronic media in general, including games on Steam, movies on-demand etc) is that they overcome the scarcity issue which has previously defined supply-and-demand and the economics of book-buying.

So if a paper book is not successful, it goes out of print and becomes unavailable, until it is brought back by demand or the author becoming more successful later on etc. There is a 'use it or lose it' element to encourage people to buy new books or otherwise risk losing access to them. Ebooks defeat this because the amount of data on a server somewhere they use up is negligible, and will effectively remain in print forever. 'Stealing them' is not possible, because the supply remains infinite.

However, this does not automatically make piracy okay and still impacts on the scarcity angle. An author still spends significant time writing a book. If he cannot make sufficient money from writing books, he will have to take on other work, therefore reducing the frequency with which new books are released, or will simply give up altogether, reducing the rate of new books coming out to zero.

The biggest-selling authors whose sales are in the tens of millions - such as Martin, King, Goodkind etc - are not necessarily threatened by this problem, but certainly for low and mid-list authors, it is a major issue and will likely become even more of one as ebooks become more and more successful.

I am a proud Terry Goodkind reader, have been for 13 years and always will be. I will never be ashamed of that. Don't like his books? Fine. Don't talk trash about them just because you can, and don't use your dislike to justify thievery on any level. A mature adult would simply say they didn't care for them and reasonably state WHY. That said, grow up and shame on YOU.

Adam, there's enough incorrect information in your post, but the pirate we called out never offered an apology. We attempted to contact them to discuss the issue and they ignored us. So we informed everyone of what happened. We've been transparent about every aspect of this book, from creation to reveal, sale, and beyond. This is another part of that story.

Also quoting the Westeros forum (notoriously unkind to all of my books) as any kind of source on the matter is a little less-than-honest with your own audience, wouldn't you think?

I will be happy to amend any inaccuracies in the entry, and will do so with regards to the alleged apology.

The person I was quoting on the Westeros forum was the poster 'goodomens', who claims to be an 'ambassador' from the Terry Goodkind fan community, not a long-standing member of the 'hater' community.

What I find odd is that whether or not the pirate apologizes or not or takes any action (positive or negative), how can Goodkind out a private citizen? As a public figure he has a lot of clout but this sort of vigilantism is overkill where the individual ends up deleting their on-line presence to recover from the fallout . Fine the inidivual, take him to court etc. but this? Doesn't match the crime - its more like a withhunt.

Shouldn't Goodkind have followed up via appropriate channels upon discovering the piracy and taken the individual to court or served him papers or something? Over the music companies aren't allowed to scarlet letter regular Joes.

Goodkind may have evidence but that doesn't mean he can work around the legal system himself and tar and feather the pirate without getting a court to back him up.

Neth I disagree with you saying that Terry Goodkind phiolsphy advocates piracey, as a matter of fact its just the oppisite. Im not trying to be rude, truley, but read the books again. He teaches about self worth and choices to make, he is for thinking for yourself and not just go with blind teachings. He is about working hard and helping, not once does he allow his main characters take what does not belong to them.

While his characters are written in such a manner that they "think for themselves", Terry Goodkind has proven to me and 299 other people that he does not uphold the practices that he preaches. The Collectors Edition (hardcover, signed, numbered, along with some other trinkets) was sold by him for $300 a pop. We have no delivery date, we have not received the weekly updates we were promised with regards to this package, Terry Goodkind is blatantly ignoring all forms of communication on this subject, and people are getting very angry and disappointed that he could write about people who are noble and have honor when he himself has none.

A libertarian believes that you have the right to make money from your work. Pirating copyright-protected material is not libertarian. There's no hypocrisy in this.