Earth, 2005. Rose Tyler is a normal 19-year-old Londoner, working, partying and still living at home with her mum. A mysterious stranger known as the Doctor whisks her off on adventures through time and space. Gradually, Rose learns of his origins as the last of his race, the once-mighty Time Lords of Gallifrey, and the Great Time War that destroyed his world. But their journeys through space and time are being followed, two words that appear almost everywhere they go, foreshadowing the great battle that is to come: Bad Wolf. 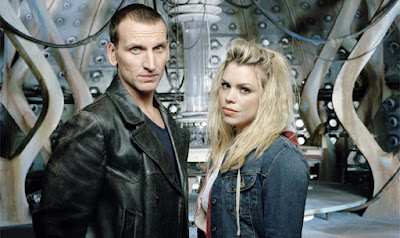 In 2005, TV writer and producer Russell T. Davies was faced with a daunting task: resurrecting and restoring to relevance the vintage British SF TV series Doctor Who. The show had aired across twenty-six seasons between 1963 and 1989 before being "rested" by the BBC due to declining ratings (the result of deliberately being put in a dead slot opposite the country's most popular TV show, Coronation Street). In the sixteen-year interregnum there had been several attempts to resurrect the show for TV and film, including a one-off 1996 TV movie as a co-production with the American Universal and Fox Studios. There'd also been enormous numbers of novels and audio dramas, with Davies himself making his Doctor Who debut by writing Damaged Goods, which saw the Doctor going undercover in a working-class housing estate to flush out an alien threat.

To bring back Doctor Who, Davies decided to make it a fast-moving, action-packed adventure series inspired by American shows like Buffy the Vampire Slayer, but, also like Buffy, featuring serialised elements spanning the series, greater continuity, a larger cast of recurring characters and some quieter character moments. He also wanted to firmly reset Doctor Who as a show suitable for the entire family, feeling (as many critics had) that in the 1980s Doctor Who had become too focused on adults and long-term fans and was no longer entertaining to young children, who had felt that the show had become cheap and outdated compared to contemporary American shows. Davies also wanted to move the show on in terms of progression and representation, with a more balanced role for the companion, and more roles for characters of all colours and sexuality.

He did - eventually - succeed, but it is fair to say that it took most of the revival season to get there.

Airing on 26 March 2005, the episode Rose can be charitably described as a hyperactive live-action cartoon. It introduces Christopher Eccleston as the Ninth Doctor and Billie Piper as his new companion Rose, both excellent performers but here performing in a story that has all the grace and subtlety of being hit in the face with a brick made of cow dung. Almost wholly lacking in logic or sense, the episode was a mess in 2005 and remains so today, and it's frankly remarkable it spawned a renewed series lasting thirteen seasons (and counting). The best thing about the episode is its enthusiasm, as well as its nostalgia-tugging by redeploying the memorable Autons from the Jon Pertwee serials Spearhead from Space (1970) and Terror of the Autons (1971). It got the job of resurrecting Doctor Who done, but rather unpleasantly, with gurning performances, a silly script and cheap effects.

Fortunately things improve immediately: The End of the World is an effective "base under siege" story of the kind that Doctor Who does so well, with the Doctor, Rose and assorted alien dignitaries stuck on a space station overseeing the final moments of the planet Earth, five billion years in the future. The Unquiet Dead, by resident Victorian expert Mark Gatiss, is an excellent horror story set in Victorian Cardiff, complete with Charles Dickens (a superb performance by Simon Callow). Other season highlights include The Long Game, with a cast-against-type Simon Pegg as an evil villain, and Boom Town, a surprisingly moving story which runs as a morality play with the Doctor and his companions being given the power of live and death over a villainous character and struggling with how to deal with that.

The season flags again with the Aliens of London/World War Three two-parter where the Earth is held to ransom by the Slitheen, a very silly race of farting aliens. Despite some effective set-up (including Big Ben being destroyed by an alien spacecraft crashing into the Thames) and some continuity-pleasing nods to the existence of UNIT, it's a story poorly afflicted by poor direction; it's notable that the director of this two-parter (and Rose), Keith Boak, never worked on the show again, and seems to have been criticised by Christopher Eccleston for how he ran the set.

The latter half of the season improves immensely. Dalek can be best described as Doctor Who's answer to Alien, employing a single Dalek to show the immense danger posed by just one of the Doctor's signature foes. Even better is Father's Day, by possibly the greatest living Doctor Who writer, Paul Cornell. Rose sets out to meet her father Pete, who died in 1987 when she was just a few months old, and inadvertently changing history for the worse. This is a five-star episode let down only by the poor execution (and inexplicable nature) of the monstrous Reapers.

The two-parter The Empty Child and The Doctor Dances marks the arrival of future showrunner Steven Moffat to the franchise. The serial slightly over-eggs the pudding (the creepy child saying "Are you my mummy?" starts off being uncanny and horrifying but gets rather old before the first episode is over) but is nevertheless effective, with superb guest performances, a great WWII period feeling and the debut of John Barrowman as fan-favourite Captain Jack Harkness.

The series finale is a tale of two halves, with Bad Wolf being amusing but now painfully dated with 2005 pop culture references which really don't mean anything any more. The cliffhanger is certainly impressive. The Parting of the Ways is far superior, a much more ambitious episode with impressive vfx and a real epic sense of danger as the Doctor takes on a Dalek battle fleet head-to-head, culminating in the first regeneration of the modern era.

The first season of the revived Doctor Who (***½) has gotten a reputation of being rough and ready over the years, some of it much-deserved, but much of it has aged surprisingly well (dated CGI and the unfathomable decision not to shoot the show in proper HD until 2009 aside). Dalek and Father's Day are among the finest episodes of the revival era of the series, and most of the rest of the season is at least watchable. It's only really Rose and the Slitheen two-parter which emerge as really poor. Ultimately Russell T. Davies achieves his goal of resurrecting the show with enthusiasm, verve and heart, and beginning the process of turning it into a phenomenon. The season is currently available in the UK via iPlayer and in the USA via HBO Max.

Looking back on them The Long Game and Bad Wolf/Parting of the Ways were really pissed at the Culture of Tony Blair's Britian: https://tribunemag.co.uk/2020/06/the-blair-show

The line "Are you my mummy?" has become almost as iconic as a Dalek saying "EXTERMINATE!!" Sorry for the all caps but honestly how else to write that line?

Yes, Davies was not a huge fan of Blair. The "massive weapons of destruction" lines in Aliens of London/World War III was a constant dig at his role in the Iraq War, as was using one of Britain's own cruise missiles to blow up 10 Downing Street.