Worldcon! The World Science Fiction Convention is one of the highlights of the SFF scene, taking place each year in a different city, often alternating between the United States and other parts of the globe. This year it was in London, the first Worldcon in the UK for nine years and the first in the capital for forty-nine. With over ten thousand attendees, it was also the largest Worldcon ever. 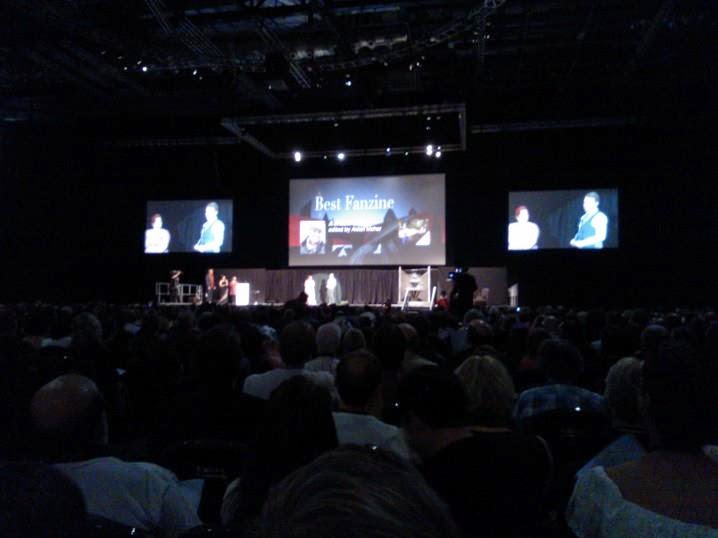 It was also my first Worldcon, although not my first SFF con. Fortunately, it was held on the closer side of London to my home town of Colchester and was enjoyably easy to get to: just over an hour from home to the door of the con. If I attend next year's event in Spokane, Washington (which may be - just about - possible) it will be a rather longer journey. I missed the early events as I only had a hotel room from Friday to Monday, so rolled up on Friday morning just in time for George R.R. Martin's reading.

Martin read from an account of the reign of King Aenys I Targaryen and the strained relationship between Aenys and his brother, Maegor the Cruel, which focused on the beginnings of the civil war against the Faith Militant. It was good stuff, even though we're not going to get the full story for a long time: this was a section that Martin has removed from The World of Ice and Fire (which will feature a briefer summary of these events) and will instead be part of a book called Fire and Blood (formerly nicknamed the 'GRRMarillion'), a much more detailed account of the reign of the Targaryens. This book will probably be mostly written and published after A Dream of Spring comes out, so don't expect it any time soon. 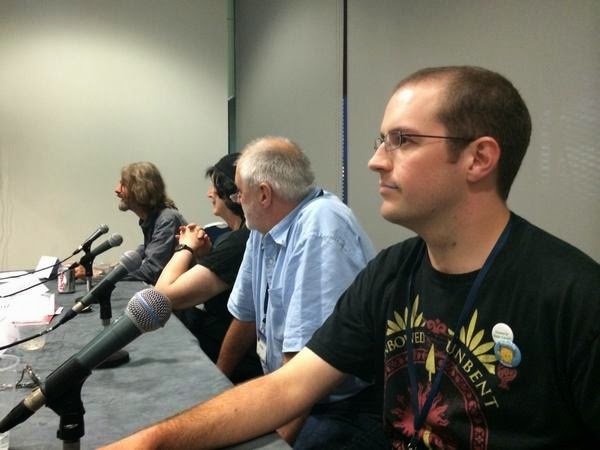 In the afternoon I grabbed a cup of tea with fantasy author Kate Elliott and her daughter, along with blogger and author Foz Meadows. I've long been a fan of Kate's work and it was fun to sit and talk to her about various issues (including dodgy SF books of the 1970s). After that I had my first panel, Comparative Criticism with Paul Kincaid, Roz Kaveney, Nick Lowe and Mahvesh Murad. This panel was interesting as we moved between discussions of the various different forms of SF (as games, TV, film and literature), and Mahvesh gave a fascinating insight into the popularity of SFF and how it is perceived in her native Pakistan (she hosts a very popular literature radio show in Karachi). One of those panels which took a little while to get into its groove, but when it did it was great and of course we ran out of time.

The long-standing GRRM fan group, the Brotherhood Without Banners, hosted a party in the Worldcon Fan Village on Friday night which was a lot of fun, although limited by atmosphere (try hosting an intimate gathering of old and new friends in the corner of an aircraft hanger to get the idea). The excellent punch made up for it though. 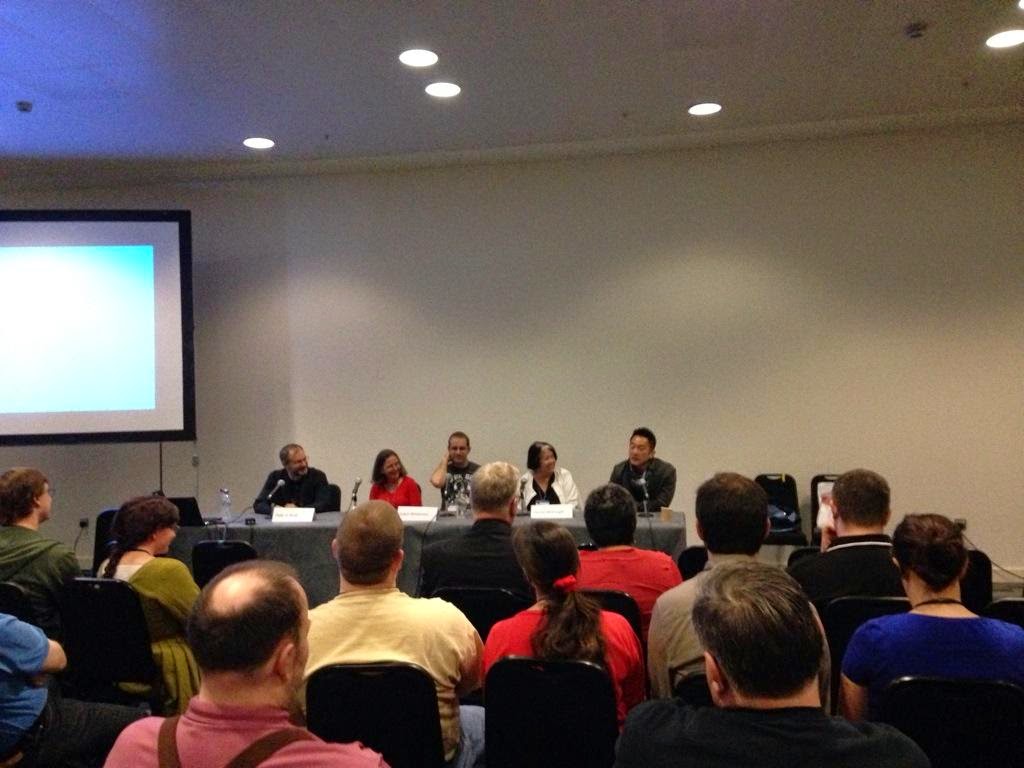 The Wheel of Time panel.

Saturday was a busy day on the blogging front. My first panel was on the Wheel of Time, which I helpfully discovered I was moderating fifteen minutes before it started. With WoT legends Harriet McDougal (Robert Jordan's widow) and Maria Simons (his research assistant) on hand, along with fantasy writers Wesley Chu and Peter V. Brett, this was more than a little nerve-wracking. Fortunately, we rallied and a fun panel was had in which some major news was unveiled about The Wheel of Time Companion (see the previous post) and some hope was kindled for those waiting for a WoT screen adaptation. After the panel I got a chance to meet Aidan 'Dribble of Ink' Moher, Justin 'Staffer's Book Review' Landon and authors Myke Cole and Robert Jackson Bennett. We repaired to a local pub for lunch, where (courtesy of Gollancz's Gillian Redfearn) I also met up with French authors Pierre Pevel and Antoine Rouaud. And then Tobias Buckell joined us, because at Worldcon you can't swing a cat without hitting a well-known SF author.

I power-napped through the afternoon (apparently I'm getting too old for these things), which means I missed the 'Coming of Age in Game of Thrones' panel, which by all accounts was a bit of a disaster. Panellists who hadn't read the books (despite the panel being billed as a spoiler zone for all of the novels) and got spoiled on upcoming events, not to mention being considerably less knowledgeable than the audience. I get the idea of bringing in a fresh perspective on the story and that could make for an interesting panel, but this was not billed as such.

I rallied in the evening for a Gollancz-hosted party in the hotel next door and rounded off the evening with a mini-concert in the fan village, because that's just how it rolls at Worldcon. 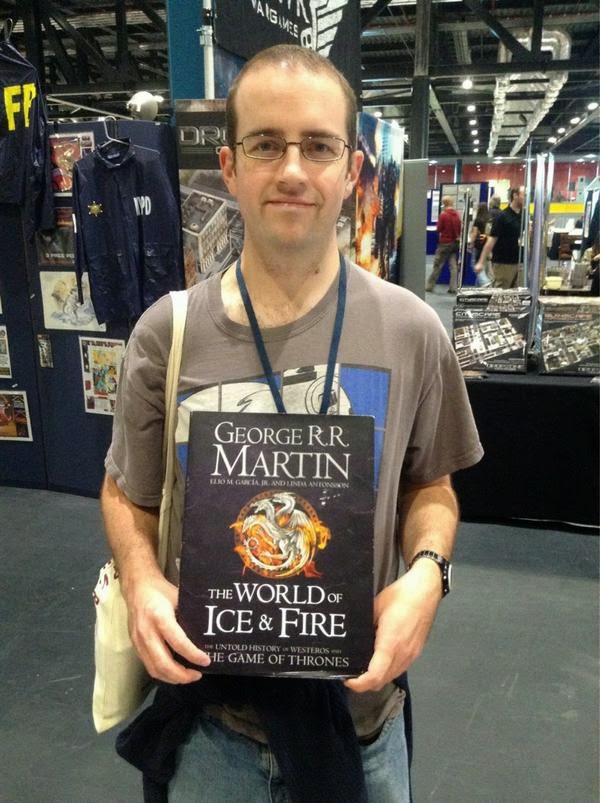 Sunday was pretty good. Normally at cons things start winding down in the last few days and fatigue sets in, but not on this day. I picked up some good bargains in the dealers' room and was briefly imprisoned by the HarperCollins team on their stall before making good my escape (having triumphantly blagged an advance copy of the next Joe Abercrombie book). In the afternoon I took part on the 'My Opinions, Let Me Show Them' panel which was tremendous fun. Foz Meadows moderated and myself, Justin Landon (catchphrase: "Brutally, brutally honest"), Aidan Moher and Thea from the Book Smugglers talked about blogging and reviewing for an hour or so. Ken Neth (Nethspace) and James Long (the defunct Speculative Horizons) got shout-outs and there was an important discussion of the differing levels of hostility faced by male and female bloggers. 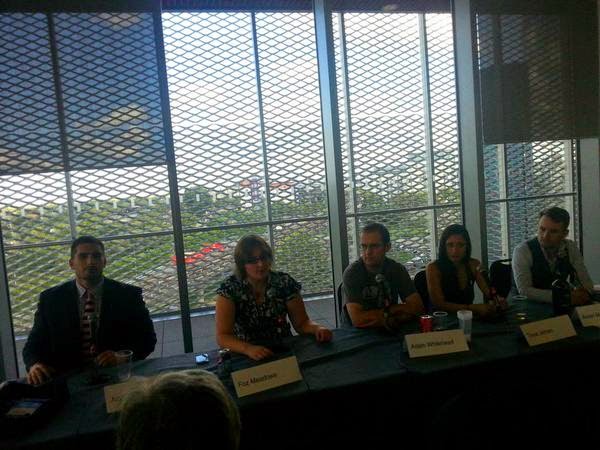 Our opinions, we showed them.

The evening saw the Hugo Awards. I'd been warned by many people that the Hugos can be an endurance test of epic proportions, complete with scary stories of long ceremonies punctuated by angry rants and tedious back-slapping. This didn't happen in London, with hosts Justina Robson and Geoff Ryman keeping things moving with breezy ease. The whole thing was done in two hours and we could get on with the partying. There were roars of approval as Kameron Hurley won (twice!) and Aidan collected his award, with Ann Leckie taking home the Best Novel award for Ancillary Justice (although part of me still wished Wheel of Time had taken it, for its huge impact on the genre). I was also impressed that the crowd restrained itself from any booing or jeering when the less-popular nominees were announced, with some polite applause and stiff-upper-lippedness ruling the day.

The evening party was mighty, with the ruthless and unrestrained deployment of karaoke. I must confess to partying a little too hard and having to leave rather bleary-eyed on Monday morning.

It was an epic Worldcon, marred a little only by the insane length of the convention hall (approximately 900 metres) which I had to walk six times a day and some chaotic planning with people finding they were moderating panels only minutes before they started. But given the sheer volume of panels and the vast number of attendees, this was by standards a phenomenally-well-organised event. Same time next decade?
Posted by Adam Whitehead at 20:00

Sounds like it was a good thing that Game of Thrones panel was on at the same time as a handful of other interesting ones. After a fantastic panel on the Friday about making a living as a SFF writer I followed Scott Lynch around like a stalker so I went to "Travel in fantasy" at the same time.

Early on Sunday there was a panel about sales figures in SFF. Did you go to that panel?

Was there any special reason you had to go to Excel West so often?

My hotel was at the other end of the convention centre. The better eateries (relatively speaking, none of the food in the area was outstanding) were all down that end as well.

Well I hope it was a kind shout out. I image it was about early support and influences. One day I'll get to one of these big con's, but I have to get past a few big commitments first - plus find some disposable income and vacation days.

Let me get this straight...for a minute I thought the "Coming of Age In Westeros" panelists were child actors from the show who didn't actually read the books...cast members like Maisie Williams.

Now you're telling me that they're people who hadn't read the books at all (not a crime in and of itself), who nonetheless had the balls to say "Sansa on the TV show is better written than in the books we didn't read", who didn't understand that Daenerys's meddling in Slaver's Bay isn't black and white but turns into a political quagmire....

...and worst of all, didn't even know who characters *on the TV show* were such as Shireen Baratheon?!

Question: I read another report that sounded like people were chanting "She's at the Wall!" so loudly that it drowned out the voices of the panelists. Is that true? Were people shouting over them eventually?

Who are they and how did they get a panel?

Loncon 3 had more than 10,000 members, but only around 7,500 attendees. Many of the 10,000 members were non-attending (supporting) members, and not every attending member turned up. It had more members than any other Worldcon, but it looks like based on actual attendance it will probably be only the second-largest ever. (The largest was the 1984 Worldcon in Anaheim, with around 8300 attendees and somewhat more than 9000 total members.)

"written and published after A Dream of Spring comes out, so don't expect it any time soon."
Correct because the way Martin writes, we are not going to see it for at least a decade.