Sunshine is the seventh movie to be directed by Danny Boyle, whose debut film Shallow Grave was a cult hit before he hit the big time with Trainspotting. He was lured to Hollywood to make A Life Less Ordinary and the The Beach, but their mixed critical success saw him return to Britain to make the extremely successful 28 Days Later (a sequel, 28 Weeks Later, is out next month with Boyle as producer). Sunshine continues the collaboration between Boyle and writer Alex Garland, which began with The Beach and continued in 28 Days Later. Although Boyle's previous films had dabbled with SF ideas and fantastical dream sequences and imagery, Sunshine is his first out-and-out SF movie. 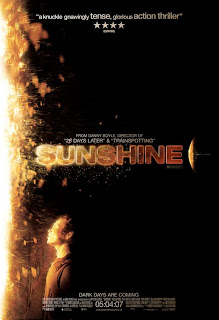 Fifty years into the future, the Sun is dying. For reasons never fully explained, the Sun is growing colder and the Earth has been plunged into an ice age. And things are getting worse. With mankind threatened with extinction, a young scientist named Capa has built a 'stellar bomb' which he hopes will kick-start the Sun back into operation again. The ship designed to deliver the bomb, Icarus I, is lost on its first attempt, so a second bomb and a second ship, Icarus II, are comissioned. However, the creation of this bomb depletes Earth's store of heavy elements. If this mission fails, humanity dies.

The film's plot initially feels uncomfortably like that of the The Core from a few years ago (a movie that falls squarely into the 'so bad it's hilarious' school of film-making), but Boyle is too far a skilled and canny director to simply write an SF action movie. The science throughout the film is pretty robust: the Icarus II has a massive solar shield to prevent it being incinerated as it gets close to the Sun, whilst the stellar bomb itself is built on quantum principles that seem reasonably sound (although it also comes across as being vastly more sophisticated and advanced than any other future tech in the movie). This fidelity gives the opening part of the movie the feel of 2001: A Space Odyssey, especially the sequences set in airlocks which recall the Pod Bay of Discovery. There's even a very nice direct tribute to the film when a bunch of monoliths turn up when you least expect them. There's also an obvious homage to Silent Running and possibly even a few nods to Event Horizon (a more-successful-than-not SF/horror hybrid from ten years ago).

Whilst 2001 was somewhat sterile, Sunshine is - forgive the pun - much warmer. The characters are introduced quite deftly and are an interesting bunch. Chris Evans (no, not that one, UK readers) is shown to be a better actor than perhaps his performance in The Fantastic Four hinted at, whilst Cillian Murphy is as excellent and intense as ever. Michelle Yeoh also delivers a fine performance whilst Hiroyuki Sanada (previously best known for nearly decapitating Tom Cruise during the making of The Last Samurai) displays immense gravitas as Captain Kaneda. Clifford Curtis gives some particularly interesting depth to the ironically eccentric psychiatrist Searle. The other characters are somewhat less well-developed, but their lack of screen time means this isn't too important.

As the movie continues, Boyle deftly provides large amounts of misdirection to the audience. Is the computer going to go mad and kill everyone, as with 2001? Is there a supernatural event going on, as with Event Horizon? Is there a stowaway on board? Are aliens involved? The audience is constantly left thinking and theorising, even as the movie dismisses one possibility only to open up another. At the same time, Boyle delivers some stunning imagery. A simple shot of Mercury passing across the face of the Sun becomes, with the help of a remarkable soundtrack, a moment of some beauty, whilst a dangerous EVA mission to repair some fried solar-reflection panels features some astonishing physical and CGI work. In fact, the effects throughout the movie are incredible. Those used to George Lucas delivering thirty thousand rapid-fire shots of CGI overload will probably find Sunshine's use of long, stately effects shots with the action based on real-life physics most refreshing, and far more impressive. This film also features one of the most disturbing scenes I've seen in a film for some time, with Boyle making inventive use of near-subliminal imagery. It only lasts a few minutes but is more disturbing by itself than most entire horror movies. Look out for it when the characters explore a dust-shrouded environment.

There is a slight problem with the ending of the movie. An entire subplot that unfolds in the last twenty minutes or so of the film feels very badly like a studio note about how to make the finale more exciting. It sticks out like a sore thumb, although Boyle makes as good a fist of it as he can, and the final few shots of the movie make up for it.

Sunshine (****) is an excellent SF movie which combines scientific fidelity with decent character-building and delivers an atmosphere that is at times quite eerie. The film focuses on the theme of death, but not necessarily as something to be feared, which is an interesting and successful directorial choice. The ending is perhaps misguided in conception, but Boyle just about manages to pull it off. This is a film that needs to be seen on the big screen, as its scale is immense and overwhelming at times. The movie is on general release in the United Kingdom at present and will be released in the United States in September 2007.
Posted by Adam Whitehead at 08:21

I 100% agree this is a film that needs to be watched on a/the big screen. The space visuals as well as set pieces are stunning. I would also like to add that in addition to death, this film is perhaps more specifically about sacrifice. Despite the setbacks, almost all of the characters remain focused on saving the earth, certainly those with whom viewers empathize. Beyond mortality, I thought Boyle was trying to show the indomitable spirit of the human race in the face of destruction, death for some a necessary act to save the whole. No matter, great film and one of the best sci-fi productions of the 21st century.