Un Lun Dun is the fifth novel by British fantasy author China Mieville. Mieville has become the guiding light of the 'New Weird' fantasy movement which has become a major force in the genre in the last few years, and in his Bas-Lag novels he's created a compellingly different secondary world mixing elements of fantasy and steampunk to good effect. However, in this latest book Mieville takes a break from Bas-Lag to instead write and illustrate his first novel for younger readers. Given that Mieville's adult work has a grotesque fairy-tale quality to it, this isn't as strange a move as it first seems, and his writing and the subject matter turn out to be a winning combination. 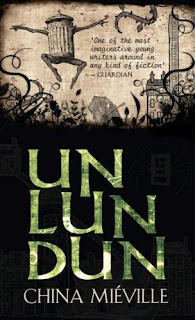 Another world lies beyong this one, separated from it by immense distance but at the same time accessible through cracks in reality. Each city in our world has its own reflection or 'abcity' in this other world. The great metropolis of London is shadowed by UnLondon, a city of the dispossessed and the magical, a city under threat by a sinister force known only as the Smog. Into this world come two young girls, Deeba and Zanna, whose coming has long been foretold. They are prophecised to save UnLondon from the Smog, but there is one snag: they haven't a clue how they're going to do it.

Un Lun Dun opens with Mieville on slightly shaky ground, betraying a slight lack of confidence in tackling this new audience (particularly in his handling of how streetwise London kids talk and interact). Perhaps aware this isn't his natural element, he very quickly hurls his characters into the streets of UnLondon and unleashes his fertile imagination in full force, rapidly ensnaring our protagonists in a very strange but at the same time familiar landscape populated by all manner of weird and wonderful creatures. In the afterword to the book, Mieville expresses his thanks to Lewis Carroll, Beatrix Potter, Clive Barker and Neil Gaiman, and indeed the novel is reminiscent of a crazy mash-up between those writers in style and tone. But it is Mieville's constant invention that really impresses the reader, from the bullet-proof umbrellas to the ninja dustbins to the half-ghosts to the black windows. Nearly every one of the 99 short chapters introduces an impressive new concept or character or idea that will keep readers enthralled and rattling through it's 500 pages at quite a pace.

The novel follows in the recent footsteps of Phillip Pullman by being a fiendishly clever, original children's tale whilst simultaneously telling a different story to adult readers. Mieville's political leanings are pretty clear from his earlier work, but Un Lun Dun weaves them in perhaps more subtly than before, with some biting social commentary on the environment and the responsibilities of government. He even has time to mildly attack overly repressive anti-terror legislation, which is a surprising move in a YA novel, but something I suspect most younger readers won't even notice. Mieville doesn't pull any punches in this regard despite this being no doubt seen by some as a 'lighter' work; he's also not afraid to kill off characters either, lending the book a slightly darker edge than some other YA books around at the moment. Some very mild counter-points to the Harry Potter books can also be found in the novel, particularly Mieville's hatred of the class system and a very funny take on the nature of prophecy.

Aside from the shaky opening, Un Lun Dun's only other major flaw is that the ending is left perhaps a little bit too open for a sequel or three. However, the new world that Mieville has created is every bit as compelling and fresh and interesting as Bas-Lag is (if far more whimsical), and return trips to UnLondon and the other abcities will be most welcome. Praise must also be given to Mieville's illustrations, which adorn the book. They are superb, lying somewhere at the Monty Python end of the spectrum of surrealism (but pretty accurately depicting what's going on in the text) and adding a great deal to the enjoyment of the book.

Un Lun Dun (****) is published by Macmillan in the UK in trade paperback and hardcover, and by Del Rey in the USA in hardcover. These editions are available now. Some more information on the book, including some of the illustrations and an interview with the author, can be found here. SF Reviews covers the book here. AVClub covers the book here whilst SFFWorld offers a review here.
Posted by Adam Whitehead at 22:13

i hope they do make a sequel to Unlundun. When i started reading it i just couldn't cast my glance away for a moment

Mieville's next book, The City and the City, is looking very interesting as it is a mix of fantastical cities but in the real world. I don't think it's related to Un Lun Dun, but it's definitely not a Bas-Lag book either.

I loved Un Lun Dun. I couldn't stop reading it, from the prologue to the epilogue. Though, I think that they really SHOULD make a sequel to the book. The epilogue, leaves a lot of space for the reader to think, what comes next? I would love to see what happens with Deeba and Hemi. They seem so cute! =)

Un Lun Dun is by far my most favorite book. I hope there is a sequel. That would be amazing. Hemi is my favorite character (:
It seems that Deeba and Hemi have some sort of crush. Well, to me i only see it with Hemi. I see his crush on Deeba, but i don't see much from Deeba towards Hemi. If there is a sequel, i hope China Mieville makes it more clear on Deeba's side.

I read this book while I was overseas and looking for any English-language fantasy... I enjoyed it, for the most part,and it WAS a breathtakingly fast read, but I found it to be really very preachy in parts.

i hope there is another un lun dun on the way.. this was the best book i had read in a long time and i read ALOT .. lol .. this was a great book and if there is a sequel im gonna buy it in advance if possible ... XD!!

This was one of the best books I have ever read but I really do hope he makes a sequel because otherwise I am going to lose my head over what might come next lol.

I Loved Un Lun Dun, it is the best book I have ever read and I never wanted to put it down. When I was finished I looked everywhere for a sequel, I really do hope he makes one, until then I'm going to be reading this book all over again I love it so much. I truly admire China Mieville's writing. SEQUEL PLEASE!!!!

How is leaving it open to a sequel a flaw ? That makes zero sense.

Please please please make a sequel, China mieville!!! Also, what age are zanna and deeba? The back of the book syas 12 but they seem like high schoolers to me