Sandy Blair is a former rock journalist turned novelist whose latest project isn't turning out as well as it should. However, when the former manger of one the most vital rock bands of the 1960s - the Nazgûl - is murdered in a satanic ritual, Sandy finds himself drawn into an investigation that leads him back to his roots and to some unsettling home truths. Meanwhile, an engimatic promoter is determined to reform the Nazgûl for a reunion tour - difficult since their lead singer was shot dead a decade earlier - that will have a startling outcome. 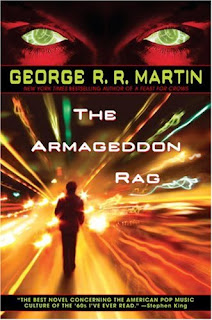 Like the opening volume of A Song of Ice and Fire and Fevre Dream, The Armageddon Rag (1983) is only superficially a genre story. The SF&F trappings don't kick in until very late in the day (actually far later than either of the first two works; nearly three-quarters of the book go by before any SF or horror elements creep in at all), and once more the focus is squarely on the fascinating characters GRRM creates. There is more of a hint of nostalgia here though, as GRRM also grapples with the death of the ideology of the 1960s and 1970s amidst the rise of ultra-capitalism in the 1980s.

The book thrives on fascinating details: the carefully thought-out Nazgûl album covers, the songs, the setlists. Creating a fictional band and making them feel 'real' is an incredibly difficult task, arguably only successfully achieved in parody (Spinal Tap being the obvious example), but GRRM pulls it off here. Knowing that 'The Armageddon/Resurrection Rag' and 'Ragin' don't actually exist doesn't stop the reader wanting to go and download them from iTunes.

Those familar with GRRM's work will draw a lot of enjoyment from seeing connections that are deliberately drawn: a band called the Fevre River Packet Trading Company or a Nazgûl song called 'Dying of the Light', for example. There are also hints of what is to come in A Song of Ice and Fire: a father-son relationship that is reminiscent of the Tarlys, a giant hulking warrior (or in this case a bodyguard) and a similar mixture of pathos, nostalgia and cruelly unexpected plot twists.

There are a few minor faults with the novel: the events of the ending are ambiguous and one plotline is left seemingly dangling, although I suspect this was deliberate (either as a hook to a potential sequel or, more likely, simply so the book's conclusion wouldn't feel too neat and tidy). Otherwise The Armageddon Rag is an excellent novel that demonstrates the author's variety by producing a work that is as far from his later epic fantasies as is nearly possible whilst staying in the same genre, yet very nearly as compelling. Highly recommended.

The Armageddon Rag (****½) is published by Bantam Press in the USA. Imports are freely available in the UK from Forbidden Planet or Amazon.co.uk.

Ongoing technical difficulties mean that I cannot directly hotlink to other sites at the moment. This will be rectified as soon as possible.
Posted by Adam Whitehead at 20:49